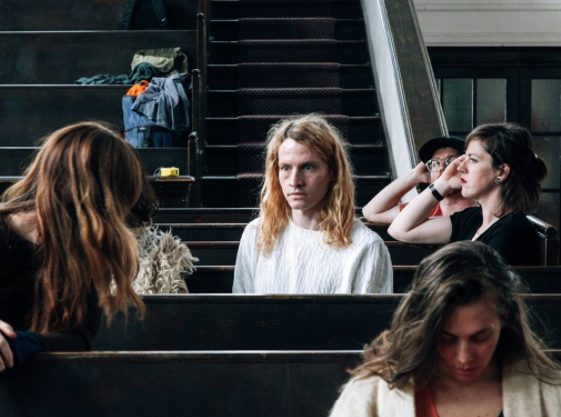 Developed and collectively dramaturged by Public Recordings- a theatrical dance company with a distinctively eclectic aesthetic- Evan Webber’s alternative gospel narrative is a little bit biblical adaptation, a little bit dystopian allegory, and a little bit sacrilegious fan fiction. Long-haired and tunic-clad, Ishan Davé repeatedly declares “I am Jesus” and we combine the evidence before us into the assumption at the base of the play- this is the story of Jesus.

This Jesus is funny, freewheeling, ambitious, and charming; he basks in the acceptance of his followers and heartbreakingly neglects the peers who sat with him when he was merely a carpenter (Liz Peterson as the dutifully sincere Mary, and Webber himself as Simon, the unexpected voice of plainspoken wisdom). Davé’s Jesus heals- then beds- the daughter of a desperate townswoman (both played by William Ellis) and wins the mercurial loyalty of Blondie (Courtney Ch’ng Lancaster), the intense town magistrate who manipulates the law and the crowd for or against her teacher at will. Other followers and bit players take the form of director Frank Cox-O’Connell, musician Thom Gill, designers Sherri Hay (set/costumes), Ken MacKenzie (lights) and Christopher Willes (sound/music), choreographer Ame Henderson, production manager sandra Henderson, and production assistant Lauren Page Russell. Said followers create a rich world in their dual creative/performance roles. Cox-O’Connell’s direction is boldly unnatural and striking in its big-move simplicity. The design is dramatic but barebones, and suggestive but anachronistic, capitalizing beautifully on the grandness of St. Matthew’s church to facilitate visual moments of massive impact. Partly recorded and partly performed live by the ensemble, Gill’s music traumatically dances along the blurry line between beauty and pain. Every facet of the production makes a statement but works in concert- nothing serves a single purpose, no one is there for just one reason, nothing is as it seems.

Webber and Cox-O’Connell are clearly intent on our seeing the strings of this indie whirlwind- lights and soundboards sit out in plain sight, performers mill about out of character and costume as the audience enters, epic effects are clearly cardboard, tape, and other such mythological substances. There is little discussion in the text about whether the man we see is the “real” Jesus. We know he is Jesus- or at least a Jesus, of some sort- and his life is worth seeing for what it is regardless of whether he’s divine If anything can prove that something can be both artificial and divine, it’s cardboard and tape, and Other Jesus.