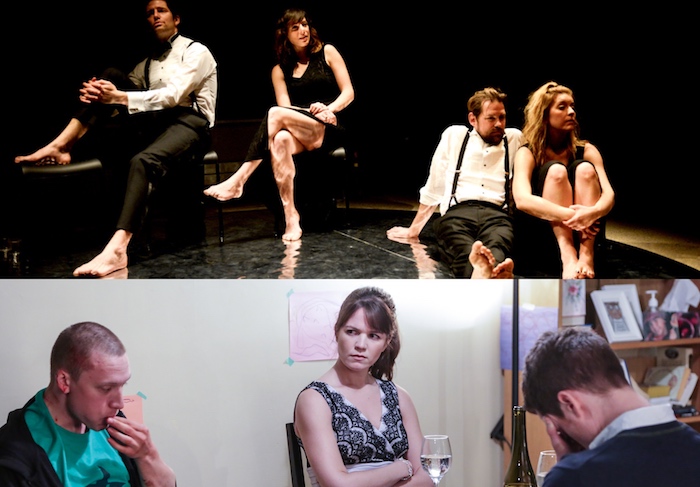 On Stage in TO: Hate/Love

Coal Mine Theatre is drawn to disturbing programming about mankind’s darkest truths. Their productions are often visceral, unpleasant, gritty, caked in blood, laced with profanity and only sometimes ultimately uplifting. Orphans is all of those things except the last one. Though funny and at times even sweet, it might be the darkest display of humanity the company’s ever attempted. Mired only slightly by overly practiced British accents, Diana Bentley and David Patrick Flemming aptly navigate the straight man roles around whom Tim Dowler-Coltman’s whirligig of a troubled young man flies. Dowler-Coltman’s Liam bursts into the scene covered in blood, interrupting a date night between his steady sister and her straight-edged husband. As Liam spins the story of how he came to be so bloody, Dowler-Coltman displays the extraordinary agility of a perfectly practiced liar, drawing us in with overwhelming charm and enchanting vulnerability then slowly testing the line of how long we’re willing to hold on to someone we decided so immediately to like. It’s an exceptional performance that grounds an otherwise serviceable but largely unremarkable production that examines the heart of what it is to hate.

At Streetcar Crowsnest, Sidemart Theatrical Grocery is presenting the other side of that same coin. Another four-person one-act full of complications and contradictions, Illusions is all about love not hate but it’s almost as painful in its lack of easy answers. An exceptional ensemble consists of four unnamed storytellers- Laurence Dauphinais, Marie Ève Perron, Brett Donahue, and Andrew Shaver (who also co-directs, cleverly with simplicity and style, alongside Paul Flicker)- together they recount the story of four people whose inextricable love stories become evidence for and against (then for again and against again, and so on) one central thesis: that true love can only exist if it is requited. They’re all four unreliable narrators with dramatically different narration styles- scene stealer Perron is wild-eyed and sincere whereas Dauphinais is serene and concisely communicative; Shaver is a sweet stickler while Donahue hits engagingly a-tonal notes of suave, bullish, and completely full of shit. They switch perspectives, backtrack on established plot, build on each other’s stories and contradict each other’s claims as they struggle to reach some sort of definite conclusion about their theory on love. They never reach one, which is surely the point. Illusions can’t define love any more than Orphans can explain hate but it is moving, entertaining, and rewarding to watch these artists try.