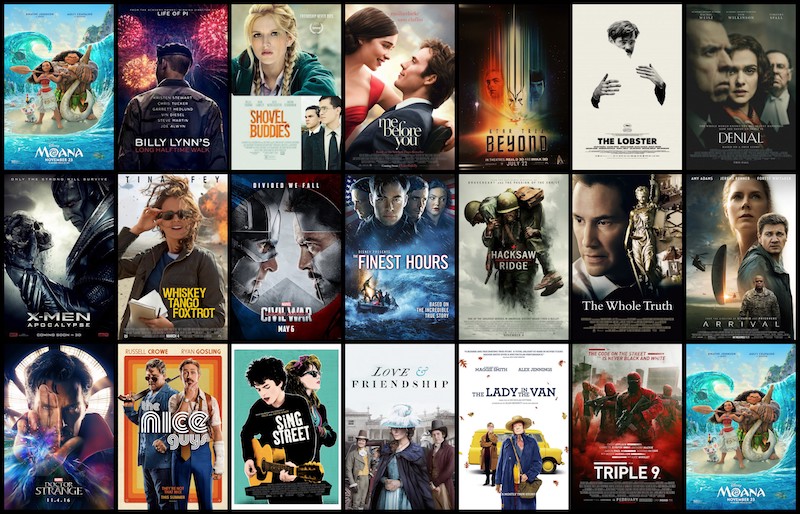 This list is Chris Pine-y and Casey Affleck-y with five huge genre movies, two Best Picture contenders, and a whole bunch of things that were in everybody else’s top ten. I liked all of these movies, which is why they’re so far from the bottom of the list, but I didn’t love any of them, which is why they’re also kind of far from the top of the list. This is the middle of the list, the very centre of things I liked a medium amount.

61. Moana
This one didn’t capture my heart nearly as much as I wanted it to. It drags in the middle and I’m just so very tired of the chosen one narrative but it’s still a Disney musical and those are just the best. The Rock is, as always, a delight.

62. Billy Lynn’s Long Halftime Walk
I’m not quite sure what went wrong here. It’s an interesting premise and there are some good performances (definitely an “on again” moment for Garrett Hedlund’s on-again-off-again track record) but Ang Lee couldn’t get me to care about characters who should be pretty darn easy to care about.

63. Shovel Buddies
This indie was written by my buddy (and MyEntWorld staff writer!) Jason Hellerman and my favourite thing about this section of the list is thinking about how conflicted he must be about ranking higher than films he hardcore loved like Civil War, Arrival, The Lobster, Sing Street and The Nice Guys (all of which were in his 2016 top ten).

64. Me Before You
Ed Sheeran, who is the musical spirit animal of Me Before You with two songs in prominent positions, on his own reads as sincere and sweet but used as the score to a romantic drama is all of a sudden totally cheeserific. Didn’t mind most of the movie (I was raised on A Walk to Remember, cheese doesn’t bother me as long as it’s sincere) but hardcore hated the ending.

65. Star Trek: Beyond
The plot of this adventure was muddled but I think that seemingly negative quality will actually make it a better rewatch than most modern blockbusters. I’ll miss Anton Yelchin forever.

66. The Lobster
Look, I get that it was cool and creative and we all love when Colin Farrell gets to be in the weird shit he actually likes instead of the boring stuff his face signs him up for, but there just wasn’t enough humanity here for me.

67. Denial
A very interesting true story with some clutch performances but an infuriating lead character.

68. X-Men: Apocalypse
Absolute madness. But, when all is said and done, I bet that Auschwitz scene is the only thing I end up remembering from this entire year of superhero films.

70. Captain America: Civil War
This made me kinda mad. I like the Marvel movies and especially want to like Captain America movies because I love both Chris Evans and Sebastian Stan, and this was definitely not not fun (guys, Tom Holland is a fucking movie star! This was always going to happen but I’m so glad it’s happening) but it was paint by numbers nonsense that wasn’t rooted in any real sense of character and spent way too much energy on setting up the next thing (and the next and the next).

71. The Finest Hours
This should probably be ranked higher but it just got lost in the shuffle of movies everyone cared about more. A well-made good guy adventure with great performances from Chris Pine and Casey Affleck (who both had somewhat phenomenal 2016s).

72. Hacksaw Ridge
This was fine, I guess. It could have been less sound stage-y and Andrew Garfield continues to be woefully miscast in basically everything (I still maintain that I like him but his Eduardo cred can’t last forever).

73. The Whole Truth
I don’t remember this movie. I’m sure it was fine.

74. Arrival
One of those movies that makes me feel like an alien. What are you people talking about?! This wasn’t insightful, it was simplistic. And boring. It had weird domesticity issues and a super lazy third act trope I can’t abide. The language stuff was cool. I would have happily watched a whole movie about the language stuff but that’s not what Arrival is.

75. Doctor Strange
I liked Benedict Cumberbatch and all the scenes in the hospital scenes were really engaging in a House-y kind of way (the humour in this movie was surprisingly on point) but I literally have no idea what happened in the plot. I was paying attention, I swear (well, sort of), it was all just too much nonsense to make sense of.

76. The Nice Guys
I feel like this film could have been great (or at least moderately fun) if they had picked actors who have ever once in history appeared to be having a good time. Who came up with the idea of casting Russell Crowe and Ryan Gosling in a comedy? Those are not (intentionally) funny people. Those are boring brooding sad people.

77. Sing Street
I think I was just in a bad mood when I saw this one. I hated the brother and you really needed to like the brother. The music’s fun, though.

78. Love & Friendship
Just because some Jane Austen stuff is great does not mean that we should make every single thing moderately attached to her name into a movie. Kate Beckinsale is fine (not delightful, fine) very little else about the casting makes even the tiniest bit of sense.

79. The Lady in the Van
This relatively boring movie is incredible for two reasons: it’s a true story (about brilliant History Boys playwright Alan Bennett), which is too bonkers to fathom, and every single History Boy makes an appearance (even James Corden, who is way too big a deal to be in The Lady in the Van).

80. Triple 9
Spoiler Alert, I guess, but this movie is basically a slow, brutal annihilation of an all-star cast. Aaron Paul, Chiwetel Ejiofor, Kate Winslet, Casey Affleck (again, what a year), Anthony Mackie, Woody Harrelson- they’re like enigmatic dominoes, falling before I could figure out why they were in this movie or how they convinced me to care so much about their characters when I didn’t care that much about their characters.