The History Boys in the Van 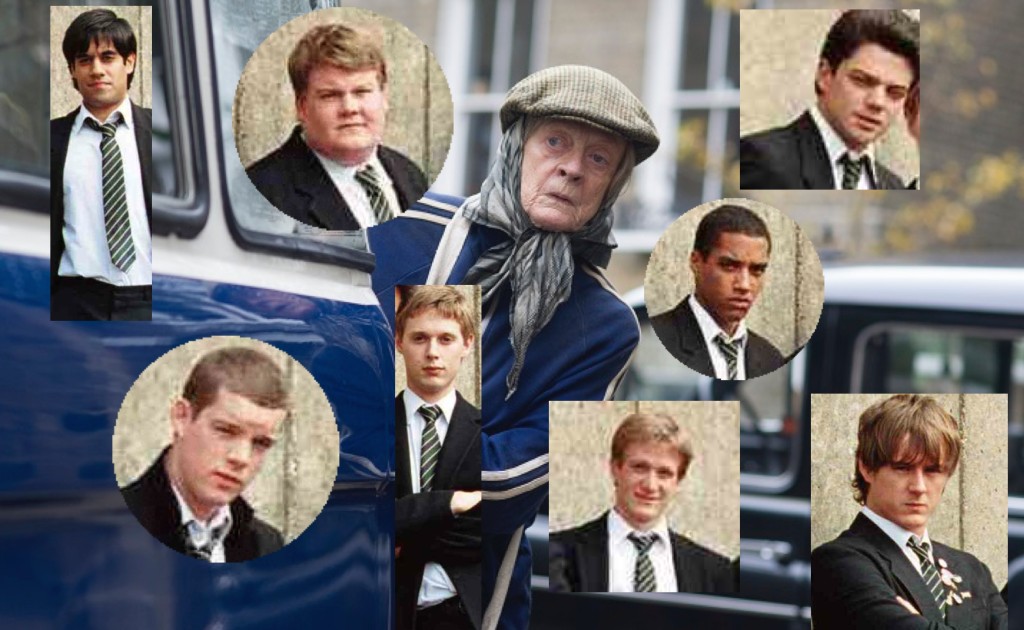 I’m embarrassed to admit it took me a shockingly long time to catch on. I noticed the “mostly true story” disclaimer at the top of the film and processed that the main character was a playwright but when Dom Cooper showed up after I’d already been introduced to Frances de la Tour as a kind-hearted nosy neighbour, I assumed I was experiencing standard British-movie cast crossover. After all, that’s a pretty commonplace phenomenon in a community as small as the British film scene- everyone has been in multiple movies with everyone and everyone seems to be in every movie (Emma Thompson once posited that she’d spent more time on film sets with Alan Rickman playing her husband than at home with her actual husband). I started to get suspicious when James Corden showed up in what was pretty blatantly a cameo (I had incorrectly assumed Cooper’s character would recur). I’m always delighted to see History Boys sharing a screen and, there being so many of them, it’s not actually all that uncommon but the two biggest breakout stars from that 2004 play-turned-film both in bit parts? Surely not a coincidence. So I started to pay attention.

Someone called the main character “Mr. Bennett” and I started to think “wait a minute, who wrote The History Boys again?” I remembered his name- Alan Bennett and started to piece it together, at first figuring Bennett must have called in some favours to use the Iron Dad/Late Late Show starpower to help sell his new movie, his brilliant first play being in large part responsible for really kick starting the careers in question. Far too late in the film, I figured out that The Lady in the Van is based on Alan Bennett’s play of the same name, which is in turn based on his memoir and the leading character is Alan Bennett himself who, to reiterate, wrote The History Boys. (Here he’s played by Alex Jennings with excellent mousy indignation though, for clarity’s sake, I wish they’d aged him up over the course of the story).

Then Russell Tovey appeared and the game was officially on. I was mildly invested in the story of The Lady in the Van (the sort of wacky character piece that is fascinating by virtue of being true but in practice plays a bit slowly) but my eyes were glued to the screen, challenging myself to identify every member of the surprise cameo cast (more of a clever stunt than a called-in favour, it seems). With the exception of the late Richard Griffiths (whose coincidental namesake does appear), every single member of that original cast was there- some shoehorned in (Cooper, whose scene serves shockingly little purpose; Samuel Anderson as a blink-and-you’ll-miss-him Jehovah’s Witness), some important plot-movers (Stephen Campbell Moore as the doctor caring for Bennett’s mother), some in more memorable roles providing key character revelation (Andrew Knott is particularly wonderful with only a line or two as an ambulance driver who shows Maggie Smith’s homeless “lady in the van” uncommon kindness). I was counting them down, challenging myself to remember them all even if they live mostly in my memory differentiated by monikers like “the one who’s ‘keen on music’” and “the one who works as a milkman” (let’s face it, you know only know Dakin’s name, maybe Posner or Rudge if you’re a real keener). Only one History Boy alluded me- ironically my favourite History Boy, Scripps- but the credits inform me that Jamie Parker was indeed there, as a real estate agent who appeared in one of the earliest scenes (in retrospect, he only appeared in wideshot so you’d have to identify his, albeit distinctive, voice to note that it’s him).

I couldn’t really tell you what the point of The Lady in the Van was beyond telling a so-crazy-it-must-be-true story (I wished there was more psychology explored, some interesting storytelling device beyond the effective but small division of the Bennett character into “the self who does the writing” and “the self who does the living”) but it was basically a Where’s Waldo of cute British boys from one of my favourite films of all time, which is definitely not an un-fun way to spend a few hours.