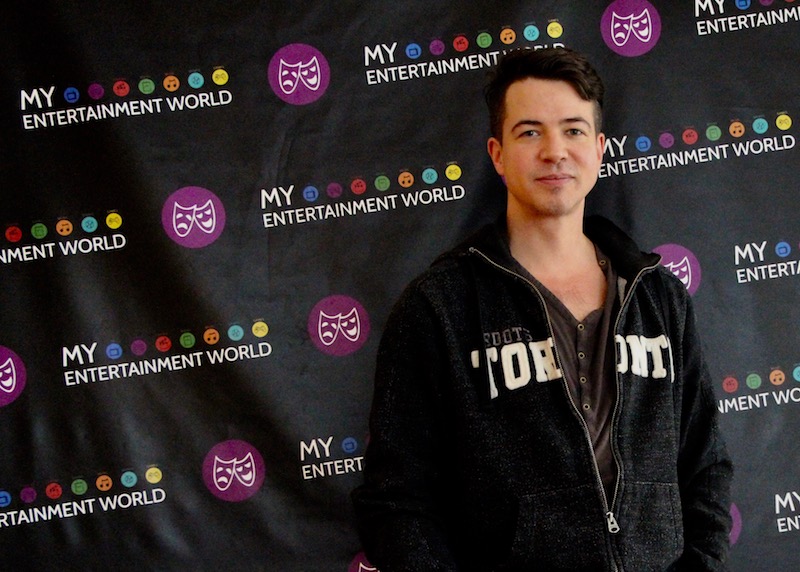 One of Unit 102 Actor’s Company’s go-to leading men, Brandon Thomas followed up his 2015 MyTheatre Award-nominated performance as the literal devil with a deeply human turn in Of Mice and Men, the final production at the company’s erstwhile home on Dufferin Street. Nominated for Outstanding Actor for his portrayal of practical dreamer George Milton in the Steinbeck adaptation, Brandon stopped by the interview series to talk about George’s worldview and the camaraderie at the heart of the play.

Do you remember your first experience with theatre?
So, back in the day, they had something called OAC, Ontario Academic Credit, and there was something called a Sears Festival. And my drama teacher at the time, he encouraged me to audition. I botched the audition, as I botch all my auditions. I was like “sorry about that” but he gave me a wink, like “you’re fine” then ended up casting me in it. We ended up winning the whole thing, and I got the bug right then and there. We did Daniel MacIvor’s This is a Play- it’s a play within a play. It’s the actor’s subconscious, so you didn’t need acting chops, you just had to enter with conviction, you know, stuff like that. But it was fun. I was gonna go to law school- I got a partial scholarship to go to Western- but I just pulled an audible and ended up auditioning for York [theatre school]. Then I got in, and look at me now [laughs]. So that was it, a long time ago. Not as long as most-I should have gotten into it earlier, and I just didn’t. So I was about 18.

How’d you get involved with Unit 102?
Well, [co-founder] Dave Lafontaine is my best friend in the world. Nope, I gotta go back further. One of my other friends, his name’s Jonah Allison. Column 13 was the first theatre group; we cast Dave in Angels in America then Dave got the acting bug. He’s always been involved, but then there was a bit of a mutiny within the company and he branched off and formed 102. Dave, Luis Fernandes, Scott Walker, and Jesse Ryder Hughes. So I’ve been involved since the inception of Unit 102, directed many of their plays, and starred in many of the plays.

You need to explain this- if Dave is your best friend in the whole world, why were you the first person he thought of when he thought “Satan”? [when casting 2015’s The Last Days of Judas Iscariot]
[laughs] It’s funny because Dave’s a great director, and he’s usually pretty hard on me when he directs, but he was hands-off for Satan.

You just have a natural satanic quality?
That was the ongoing joke. I heard that from many people. “No acting required, huh?” I’ve heard that many times. I don’t know why people think that of me, but I take it as a compliment, somehow.

The Last Days of Judas Iscariot won Outstanding Production last year, and you were nominated for Supporting Actor. What stands out in your memory about that show?
We had a lot of fun, because the cast was so great- Cameron Sedgwick, he was wonderful; Khadijah [Roberts-Abdullah]– I remember doing the table read and just being so elated with the group of people. I felt like I didn’t have the chops, to be honest, because everyone was so characterized.

What attracted you to the role of George in Of Mice and Men?
Well, they made me read it in high school. I’m not much of a reader but they made me read it, and I fell in love with it. It’s just a novella, so you can digest it like that. It’s the American dream, right? Maybe it’s gone now but, back then, if you worked hard, and you saved your money, you could achieve anything. It’s the beauty of the American dream and, I think, an analogy for family. Because you get married too young, you have kids too young, and sometimes I think, if you do that, you just wanna divorce yourself, literally and figuratively, of your family. But the reality is, if you stay with it, you’re better off in the end. And I think that’s George and Lennie. He’s constantly saying “Man, if I didn’t have you, I could live so easy. I could just go get drunk and have hookers and do whatever I want.” But the reality is, because they’re stuck together, they could effectively retire and live off the fat of the land. I think George’s ideology was different from everyone else’s ideology- the deferral of gratification. I think he’s the only one on set who actually understands deferral of gratification, and that’s actually a sign of intelligence.

George is an iconic character. When you’re tackling something like that, do you spend a lot of time worrying about filling those shoes, or putting your own spin on it?
When I did Glengarry Glen Ross, I was playing Al Pacino’s role, and everyone was like “how are you going to play Al Pacino’s role?!” but I just forgot Al Pacino played it. Always, when you do something, you just do it from the heart; it’s just you up there. So yeah, my own spin completely, hopefully.

Tell us a little bit about working with Dave as a director to develop your interpretation of George.
Dave was fantastic, and I trust him completely, because he really is a wonderful director. Where I give him the most credit, he’s acutely aware of what the audience is seeing. I’ve worked with a lot of directors who don’t necessarily take that into consideration, which is interesting. So he’s very good at telling a story. Curtain up, what’s everyone gonna see, to curtain down, and what does everyone take away. So I just trusted him completely. Even if I disagree- and I disagree a lot, everyone disagrees all the time, but I just made the conscious effort to agree and just say “okay, if this is what you want”. Professionally, that’s the way you should always be, but sometimes we lose sight of that when we know people so well. I think he wanted George still amongst chaos. And I think that panned out in the end.

Your version of George seemed a bit kinder than he’s often played, especially in your scenes with Mark Paci’s Lennie. What was it about the character that made you want to pull that out of him?
One of the main motifs is just sheer and utter loneliness. Everyone’s lonely. Curley’s wife, Curley, The Boss, Crooks, Slim- everyone’s just alone. Except for George and Lennie. Even the way I am now- just feeling words come out of my socket- it’s so nice to be able to vent, and a lot of the time during the play, it’s clear that George is just venting therapeutically, cathartically, through Lennie. I was acutely aware of how valuable that [person to talk to] is. Mark Paci, I mean, he’s a lovable guy, you know?

The cast had a real sense of camaraderie that we could see in the play. Talk a little bit about the ensemble dynamic.
It’s true. You know [laughs] fight call started off with quite a lot of reverence, and then by the end of it, zero reverence. We would just sing and dance, and pretend to fight each other, and we’re just guys being guys. So I think that lent itself to the camaraderie of just guys in a room. But yeah, fight call had a lot to do with that, I think.

Jim Gilbert played Slim. I’ve known him for years, he directed me in a play once, but we never actually were on stage together. So the first time we’ve been on stage, knowing him for 10 years- that was great. I hope we had that mutual-guy respect thing going on onstage. That was fun to delve into, that’s for sure.

Designer Adam Belanger is known for his elaborate, immersive sets. How does having a design like that help you get into the world?
You can’t praise Adam enough, right? There was a play called A Behanding in Spokane that Carmine [Lucarelli] directed. Adam did this set, an old hotel room; I walked in and, for the first time ever, I was like “oh, this changes everything.” Because it looked like an old hotel room. I was transported and, not to impugn the actors’ performances, but the set was the star of the show. It was just wonderful. And I don’t think we ever looked back. He did Lakeboat and it was a gorgeous set. Judas was fantastic. And this one was amazing. I helped build it, so… [laughs]. No, I didn’t help at all; I hammered a few nails. But, man oh man, to walk into the bunkhouse was phenomenal. It’s phenomenal. It helps you immeasurably. Adam is fantastic. I can’t praise him enough, honestly.

Do you have a favourite moment in the production?
There’s so many. I haven’t mentioned Candy yet. Thom [Zimerle] is a beautiful man. There is a moment in the play where George has the realization that “we can actually do this – we can actually eff off and live off the fat of the land.” And Thom gives me a look. It was great. It made me well up almost every night.

Then my favourite other moment was when [spoiler alert], at the very end of the play, Slim lets George kill Lennie. He gives me a very subtle “do you want me to leave you alone?” and I give him a nod. I was so grateful that Slim got it, that I had to shoot my own dog, effectively. It was hard to do it without crying, because it’s just so powerful. The writing is just so unbelievable. As an aspiring writer, it’s depressingly good. It’s like, how do you do that?

What were you hoping audiences would take away from the show?
That it’s all about companionship. It’s all about the people in our lives, as much as we take [them] for granted. You know, I’m sure there’s a wife somewhere who hates her husband, or a 16-year-old who hates her parents, but, man oh man, think about your life without them for one second.

Do you have any dream roles still on the list?
I did Glengarry, that was a dream role. And I think George was another dream role.

We’re always talking about True West; it’s such a typical guy’s play. You know, Sam Shepard, it’s kinda cliché, so I’m kinda over that. I don’t know, my favourite movie is A Few Good Men–

That’s my favourite movie too.
Come on, really?

Of all time. Do you want to play Kaffee in the stage version?
Oh, fuck, that’d be fantastic. But now here’s an example where I don’t know if I could divorce from Tom Cruise doing it. I mean, he’s just- how do you divorce that? I’ve seen it like 20 times. I did Jessup’s monologue in school. “You can’t handle the truth- ”

Did you accidentally mimic all Jack Nicholson’s intonation?
Because it’s hard to divorce! It’s hard because the movie is so great. I love it so much. So that would be one [dream role], to the point where I bought the play. But Dave was gonna direct it. Dave, smart, smart guy, brought up a great point- because of Adam, and how great Adam is at set building- to do it on [a single] set would be hard, because it’s so transitional. You gotta go from here to here to here to here- it’s what makes such a great movie. Even when you’re reading the play A Few Good Men, you’re like “this is really a movie.”