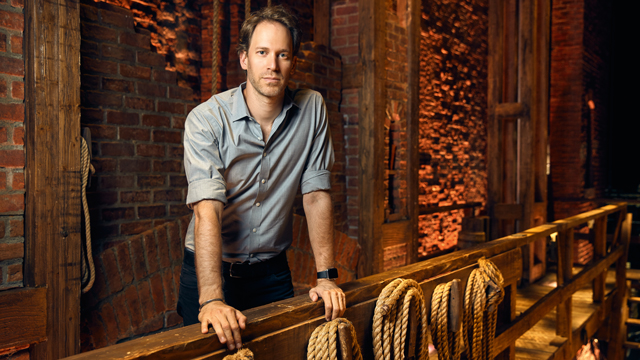 David Korins may be nominated this year for Outstanding Set Design for his work on the Canadian Opera Company’s Norma but you don’t have to know opera to know his work. He’s designed for Kanye West concerts, live TV events, restaurants, films, a Picasso exhibit, and tons of hit Broadway shows including something called Hamilton. David took the time to answer all our burning questions about Norma (Get it? “Burning” questions! You had to see Norma) and a few about those other revolutionary things.

Can you remember the first theatre production you ever saw?
I saw a production of Twelfth Night at Trinity Rep when I was 10. I remember being totally bowled over by the realism of the set and the fact that I could understand all of the words.

How did you get into designing?
I was always involved in art and music as a kid. In high school, I started off as an actor. During my senior year of high school, I auditioned for the part of Billy Bigelow in Carousel and was devastated to not be cast, so the director encouraged me to help the math teacher build scenery instead. I stayed involved behind the scenes through the rest of high school into college, where my professor encouraged me to get an internship at Williamstown Theater Festival.

What was the first show you ever worked on?
I was in my high school’s production of Man of La Mancha.

You were nominated for a Tony last year for your work on Hamilton. Where did the concept for that design come from and what do you think it brings to the show?
Hamilton’s story contains nearly 25,000 words and 52 musical numbers spanning almost half a century of American history. In order to do justice to Lin’s incredible text onstage, we knew that we had to come up with one big theatrical metaphor that could serve the whole breadth of the story in a seamless way. The final design weaves early American colors, materials, and textures into a gesture of aspirational space that nods to the literal work the Founding Fathers were doing on our country.

Did creator Lin-Manuel Miranda and director Thomas Kail give you much input in the development of the show’s aesthetic?
Lin and Tommy worked with me every step of the way to develop the look and feel of the show.

You also worked on Grease: Live which is nominated for a couple of awards from our television branch this year. How did you approach that blend of theatre and television?
Theater uses real scenery and carefully choreographed scene changes to transition between worlds on a single stage, while television makes use of camera tricks and the ability to move across indoor and outdoor locations to achieve cathartic revelation of space onscreen. We mined these techniques to make an experience that uses the best practices from each of those mediums.

How did the rain affect your Grease: Live design on the day?
In live performance you always prepare for the worst and hope for the best. People tune into these live broadcasts to tap into that “anything can happen” feeling. The rain ended up being an asset to Grease: Live because it really drove home that the experience was happening LIVE, ultimately making viewers feel more connected to the live experience.

This year your big Broadway project was Dear Evan Hansen. Tell us about that show and how your design works as a part of that whole.
The original design concept was small tectonic plates of warm family life floating around in a dark void of cyberspace. The big challenge was to show both interior growth and exterior conversations through the lens of the Internet. We captured this by using screens and projections to deliver both dramaturgical and architectural details and also a metaphorical online community

Your MyTheatre Award nomination from our Toronto branch this year is for the Canadian Opera Company’s production of Norma. How did you get involved with that project?
Director Kevin Newbury and I are longterm friends and collaborators and have worked on many world premieres and revivals.

Walk us through your process a bit. Where do you start with a massive project like Norma?
My process always starts with the text and the music. I start by letting it wash over me like a meditation before going through with a fine tooth comb and picking apart the logistics of how the piece works. Then, I dive into countless hours of conversation with collaborators.

What sort of conversations did you have with director Kevin Newbury in developing the design concept?
I let him lead the conversation. He had a very specific vision for the world he was looking to conjure – something simultaneously modern, period and timeless. He cited Game of Thrones as an example of a world that escapes definition and could exist either in the future, past, or a parallel universe.

Your co-nominee Jessica Jahn designed incredible costumes for the opera. How much collaboration was involved in creating a cohesive world?
Jessica and I worked hand in hand to create a cohesive visual world for Norma.

What were some of the technical challenges of the design? We definitely need to know about that big final set piece.
There were many challenges to the design – both artistic and technical. The largest artistic challenge was creating the feeling that the whole story was unfolding throughout a vast kingdom. How do you make it look like there are small clandestine meeting spaces carved out within this huge world?

The large flying door posed a significant technical challenge. We needed to create the illusion of spikes going into the ground without actually putting gaping holes in the deck.

But the biggest technical problem to solve was definitely the final bull, our version of the Trojan Horse. It was tricky because it needed to be big enough to convey the idea that soldiers could be hidden inside of it and deliver a power-packed ending to the show, but it also needed to physically fit onstage. We don’t actually light the piece on fire. It’s built to look like it’s totally made out of wood, but it’s actually a combination of wood, metal, and flame-treated canvas. The flames erupt downstage of the piece and wrap around it.

Were you pleased with how the design worked in practice?
Yes! I’ve loved working with the incredibly professional and talented people at the Canadian Opera Company.

Do you have a favourite moment in the production?
I love when the huge upstage door opens to reveal an endless forest of sparkling glittering snow. It’s so beautiful and captivating. The production spends a lot of time endowing the internal world of the kingdom with importance, so it’s thrilling to get to see the world beyond the walls.

What would you say is your top priority (either artistic or practical) in any design project?
My top priority is always to serve the text and the vision of the director as responsibly as I can. I view my role as one of co-storyteller, so my goal is to make the narrative and the desired story told as cleanly as possible.

You’ve also done a number of really huge concert projects. What’s involved in that creation process? Is it much of a collaboration with the artist? Do you look to album art or video aesthetics at all when creating a concert design?
My design process for a concert is exactly the same as it is for an opera or play or restaurant. Each project has a design collaborator, whether it’s a director or a restaurateur, and an ultimate goal: to tell a story. My inspiration comes not necessarily from the videos or art that have already been created in response to the work, but from the hopeful impression that the artist wants to give to the audience. I spend hours in conversation trying to understand what my collaborator wants the patron to feel and then use my toolbox to try and conjure that feeling.

What’s your favourite design you’ve ever worked on?
I’m always most enthralled by the project that’s currently on my drafting table. I try not to look in the past – to always stay forward moving and forward thinking.

What are you doing now/ what’s your next project?
I’m working on opening two new Broadway musicals (Warpaint and Bandstand) and a new restaurant in Times Square (Bond 45).

Do you have anything you’d like to add?
I’ve had many shows tour through the Toronto arts landscape, and I am continually overwhelmed by the generosity and spirit of the city and its thriving arts scene. It is a pleasure to be woven into the artistic fabric of the city.