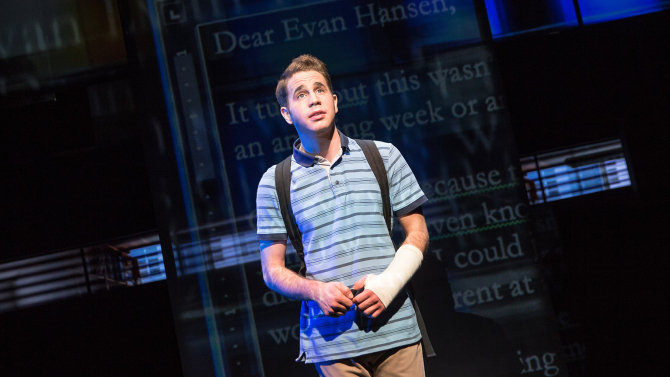 At some point in life, we have all been Evan Hansen – feeling alone and invisible to the world. Unfortunately, in the technological age, the chatter surrounding a person who feels alone is magnified to a digital roar and sometimes that roar bares its teeth at the outcast in the form of online bullying. Steven Levenson, Justin Paul and Benj Pasek’s new musical Dear Evan Hansen, directed by the undeniably-talented Michael Greif, explores what it means to feel invisible in an overly social world and, just maybe, leaves misty-eyed audiences inspired to show a bit of kindness to their fellow man. Dear Evan Hansen is the musical that the digital generation needs. Not just children or teens who are hounded by insecurities and hormones. A huge percentage of the cyber bullying on social media, in comment sections and on digital platforms comes from full-fledged adults who never learned how to treat other humans with respect. If nothing else, Dear Evan Hansen reminds us of the power of positive relationships and the destructive capacity of words, whether written, Tweeted, Instagrammed or otherwise.

Dear Evan Hansen explores the world through the eyes of a misfit high schooler, Evan Hansen, whose nervous compulsions and anxiety make social interaction difficult. At the behest of his therapist and loving mom, who supports him while attending night school, Evan attempts to write himself an encouraging letter that turns into a written cry for help – a plea that is then seized by an angry classmate, Connor Murphy. When that classmate commits suicide and Evan’s note is mistaken for the boy’s suicide note, Evan finds himself thrust into the spotlight as Connor’s family becomes convinced that Evan was their son’s best friend and clings to his every word. Desiring to help the grieving family, Evan fabricates a backstory about his friendship with Connor and empowers an entire online community to keep the boy’s memory alive. Standing tall from his sudden acceptance (built upon a foundation of lies), Evan finally feels seen. However, cracks in his story threaten to destroy the façade that empowers him and brings him happiness, leaving Evan devastated but open to the support of the one person who has always been there for him: his mother.

What distinguishes Dear Evan Hansen from other musicals is its honest discussion about a difficult subject matter without manipulating the audience into false emotions. By that, I mean that there are moving, heart-wrenching and frustrating moments in the show but the writers have not constructed heroes and villains that you are mandated to love or hate – the characters feel authentic. The audience is drawn to empathize with them rather than feeling forced to laugh or cry or applaud on command. There is subtlety in the book, and not just with respect to character development. This is perhaps best illustrated by the musical’s introspective finale – a very different ending than Broadway audiences are used to. Additionally, Dear Evan Hansen has a small ensemble cast and the scenes feel intimate, which is also atypical for Broadway offerings.

The show’s lyricists and composers, Paul and Pasek, excel at crafting a bright, catchy and enjoyable soundtrack to compliment Levenson’s book. Earworms like “Waving Through the Window,” hilarious and toe-tapping comedic numbers like “Sincerely, Me,” and reflective moments like the touching father/son duet “To Break in a Glove” bring a lyrical soul to the drama. Other noteworthy numbers include the tear-inducing “So Big/So Small” and “You Will Be Found” are guaranteed to make even the strongest resolves crumble.* It is worth mentioning that Paul and Pasek’s work receives a musical boost in this production from Alex Lacamoire, who recently seized a Tony Award and a Grammy Award for his work on the blockbuster Hamilton. Lacamoire provided orchestrations and additional arrangements for the show.

Surprisingly, Lacamoire is not the only Hamilton alum leaving his mark on Dear Evan Hansen. David Korins, whose scenic design for Hamilton earned him a Tony nod, created a sparse but striking set design that integrates the social technology undercurrent of the show with compact moving set pieces that elegantly match the fast-pace transitions in the production. Another notable artist collaborating on this production is choreographer Danny Mefford who has repeatedly demonstrated a keen ability to weave every day interactions into dance-like steps, with his most recent work being Fun Home. The choreography in Dear Evan Hansen is appreciably simple yet visually engaging.

What elevates Dear Evan Hansen from being a good Broadway show to being a must-see Broadway show is the casting. Supporting cast member Will Roland, making his Broadway debut as the irreverent smart-ass Jared Kleinman, counterbalances the serious tone of the show with his delightful comedic timing and sarcastic wit, and Mike Faist delivers a lovely and touching performance as both the sullen Connor Murphy before his death and Evan’s imagined Connor Murphy, a conscience of sorts, after his death. Delivering a heartbreaking and empowering performance as Evan’s hardworking single mother Heidi, Rachel Bay Jones continues to inspire as one of the greatest modern performers on Broadway. Jones is a vocal powerhouse, but she also delivers authentic emotional moments and does not shy away from her character’s failings, misgiving and insecurities, which is refreshing. However impressive Jones’ performance may be, it pales in comparison to that of Ben Platt in the role of Evan Hansen. Platt has an endearing charm about him, crafting an idiosyncratic character who is somehow universally identifiable yet still an obvious outcast marred by feelings of self-doubt, loneliness and unease. Platt makes you feel Evan’s anxiety at the show’s beginning, enjoy Evan’s successes as he begins to feel connected to the world around him, and lament Evan’s absolute despair when his fantasy collapses around him. How Platt performs the climatic song Words Fail eight times of week baffles the mind. Platt may be known to audiences for his work in the movie Pitch Perfect, but he should henceforth be known for Dear Evan Hansen. It is a Tony Award-worthy performance, and he is sure to grab a nomination for his work.

Honest, challenging, uplifting and refreshing, Dear Evan Hansen is the kind of new musical that Broadway needs more of, and it is not difficult to see why much of the cast has been with the show since it started working its way to its home at the Music Box theatre. Theatregoers of all ages will identify with the themes in Dear Evan Hansen, and the thoughtful musical duo of Paul and Pasek have left their mark on the Great White Way with this award-worthy show.

* Kleenex should really be sponsoring this production – a travel size package of tissues included with each Playbill.