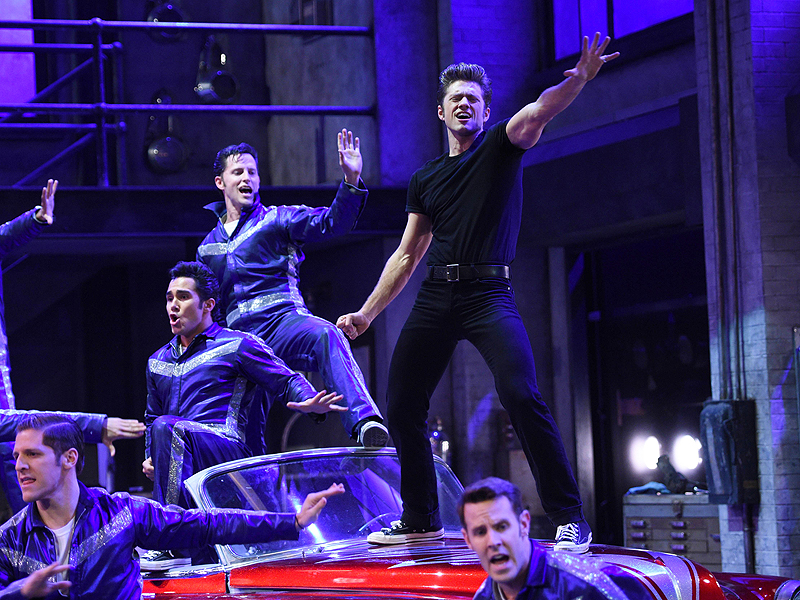 Was that the most fun I’ve had watching television in a really long time? Honestly, maybe. I usually don’t watch the NBC live musicals because the little I’ve seen of them has trended disappointing with too much stunt casting and boring musical choices (not only was Carrie Underwood terribly suited to Maria but The Sound of Music just isn’t very much fun. Laura Benanti almost saved it but there’s only so much the Baroness can do) but when FOX got in the game with a smartly chosen first attempt at ripping off NBC, I was on board.

Grease is just cheesy enough that the inevitable shoddiness of a live production (oh my god the sound mixing!) could read as self-awareness. It’s iconic enough that it could make a big impact with just a few carefully recreated moments and a key Didi Conn cameo (has there ever been a better piece of casting than Didi Conn as Vi?). It’s simple enough to execute pretty easily at a pretty high level (there weren’t any notes in any danger of not being hit) but complicated enough that the live element added excitement (unlike the Sound of Music, which was so slow it felt like the actors could stroll from set to set and stop for a snack along the way). That they felt they needed to add an original Frenchie song is one of the great tragedies of our time, but I suppose every rose has its thorn.

With mostly teenaged characters, FOX was able to cast a bunch of fun, eager hotshots rather than older actors slumming it (the adults that were there- Wendell Pierce! Ana Gasteyer!- were just fun bit players). They smartly balanced stunt-cast pop stars (Carly Rae Jepson, Joe Jonas, Boyz II freaking Men) with killer character actors (Kether Donohue!) and honest-to-god triple threat stars. Much-needed multicultural casting (sadly not a given with Grease, even in 2016) made room for breakout performances by Keke Palmer and Jordan Fisher, turning the show’s least famous songs into its most memorable moments (did you guys know about Jordan Fisher? Where has Jordan Fisher been all my life?!).

While I would have appreciated more of a scene-stealer than Carlos PenaVega as Kenicke (and, if we had to go with PenaVega, couldn’t we get his firecracker Dancing with the Stars partner Witney Carson to play Cha-Cha? Yvette Gonzalez-Nacer added nothing), Broadway rock star Aaron Tveit and ballroom ingenue Julianne Hough were perfectly cast in the leading roles. A power tenor with a million-watt smile, Tveit’s great in everything but his ability to flip between sincere vulnerability and slick cool-kid swagger makes him particularly well suited to Zuko. Hough isn’t nearly as versatile but her angel-faced golly-gee bit is perfect as Sandy, her voice sounded great on “Hopelessly Devoted” and, obviously, she tore it up in the “Hand Jive” dancebreak. That said, this was Vanessa Hudgens’ show and that perennially overlooked and discounted little diva owned every minute of it from her fabulous Stockard Channing attitude (more homage than strict imitation) to her endlessly re-watchable “There Are Worse Things I Could Do”. I’ve always been a High School Musical hater but I’m now fully a Hudgens convert.

Technical issues (and there were plenty) aside, Grease: Live deftly navigated its own ambition. Dream sequences and flashy transitions that easily could have been side-stepped were embraced with the same hearty “why the hell not?” attitude that marked the whole production (except the choreography which, in true Zach Woodlee style, was way too simple and mostly involved a lot of walking around). Could I have done with less Mario Lopez? Well, yeah, I could always do with less Mario Lopez but this thing was pure fun and even Mario Lopez couldn’t get in the way of that (actually, to be fair, when he was playing Vince Fontaine, he actually added to the fun; it was just the behind-the-scenes interstitials that drove me nuts). There was rain in LA today, which forced some last-minute re-staging and made the final scene into a weird travelling extravaganza so that the audience could see the awesome outdoor carnival set even though it wasn’t used for “You’re the One that I Want”. Piling out of their golf carts and onto that set, in their wacky outfits, singing an incredibly silly song, the Grease: Live cast appeared to be having more fun than anyone’s ever had (in contrast, I’m not sure anyone had any fun at all during Peter Pan Live). So I had fun too, because silly, sweet, Grease-style fun is infectious, if nothing else.

A womp bop a looma a womp bam boom!

And bows for the ensemble.
Because Tommy Kail is ONE OF US.
CRYING.