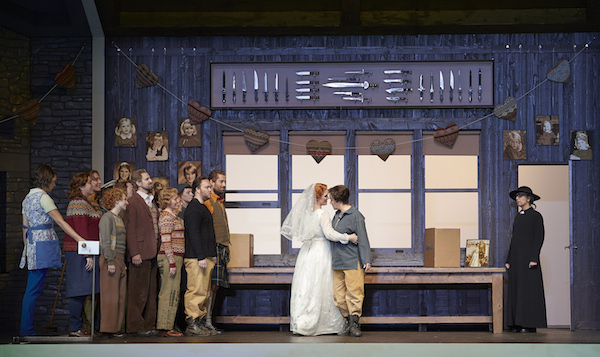 Yes yes yes and once again yes. In five years covering the Canadian Opera Company, I’ve never seen a rep season with this much storytelling depth and theatrical impact. I’ve never seen a perfect balance between homegrown talent, international stars, and homegrown international stars. I’ve never seen female characters with this much agency and this many leading ladies with this unblinking of a spotlight. I’ve certainly never seen premiere productions with this much directorial courage and contemporary insight. The one-two punch of Handel’s Ariodante and Bellini’s Norma is the COC’s greatest knockout in recent history, one that is sure to endear the company to a new generation of opera patrons who’ve been waiting for something that feels like today.

Much of the success of this pairing lies in its equality. This is not a case of a flagship and a secondary show but rather a perfectly chosen set of contrasting works that illuminate each other. The biggest star headlines Norma (the incomparable Sondra Radvanovsky whose power and control make Bellini’s bel canto score breathtaking) but it’s Ariodante that falls under the baton of the COC’s celebrated conductor, music director Johannes Debus (the orchestra, especially the strings section, sparkles). Norma has a grand, impactful aesthetic (set by David Korins, costumes by Jessica Jahn and entrancing lighting design by Duane Schuler) but Ariodante has director Richard Jones’ bold staging and the surreal, beautiful shock of Finn Caldwell & Nick Barnes’ puppet work (I can count on one hand the number of times I’ve found puppetry effective but, when it works, it’s unforgettable and here it certainly does). Both pieces buck operatic standard by embracing their heroines as the masters of their own fate, empowering them to drive the narrative, allowing them the right of kinship and empathy, especially when it comes to their treatment of the other women on stage (namely Isabel Leonard’s gorgeous Adalgisa, Norma’s romantic rival, and Ambur Braid’s complex Dalinda who is the accidental purveyor of chaos in Ariodante). There are many moments of massive impact throughout Norma but it’s telling that the most stirring is a pair of a cappella duets between women.

In Ariodante, the strength of the female storytelling is heightened even further by the casting of Alice Coote in the title soprano role written for castrato. The costuming suggests Coote is playing Ariodante as a man just as Vardul Abrahamyan is with the villain Polinesso (a role written for contralto though it seems to me that the character’s brutality would be far more impactful as a bass). The modern setting and Coote’s refreshing resistance to gender caricature, however, leave the performance open to interpretation. The world around Jane Archibald’s vibrant Ginevra is harsh and hyper-masculine so there’s something intriguing about her lover’s femininity, especially as played with wide-eyed sincerity and adorable shyness by Coote. The opera is dominated by thrilling female voices (both Coote and Archibald soar with clarity and nuance, Braid with darkness and longing) but tenor Owen McCausland breaks up the soprano monopoly with a rendition of Lurcanio’s “Del mio sol vezzosi rai” that still has my heart aflutter.

Neither opera has a libretto that’s all that inspiring (most of Norma‘s arias are a single sentence repeated ad nauseam) but their narratives are among the canon’s strongest, telling stories of sacrifice, betrayal, compassion, enduring love and strength in the face of sorrow. Jones’ reimagining of Ariodante‘s final, originally comedic, moments for this new production (co-produced with Festival d’Aix-en-Provence, Dutch National Opera, and Lyric Opera of Chicago) elevates the potentially problematic Much Ado About Nothing-esque plot and keeps the focus on Ginevra’s emotional arc. The production brilliantly shines a searing light on the abuse and shaming of the opera’s women, effectively making the story of Ariodante more than it is.

One a COC Premiere and the other a New Production, Ariodante and Norma showcase the best of the Canadian Opera Company’s performers, musicians and designers but it’s the contemporary thoughtfulness in the programming and direction of these fresh interpretations that really inspires confidence in where the company is headed.