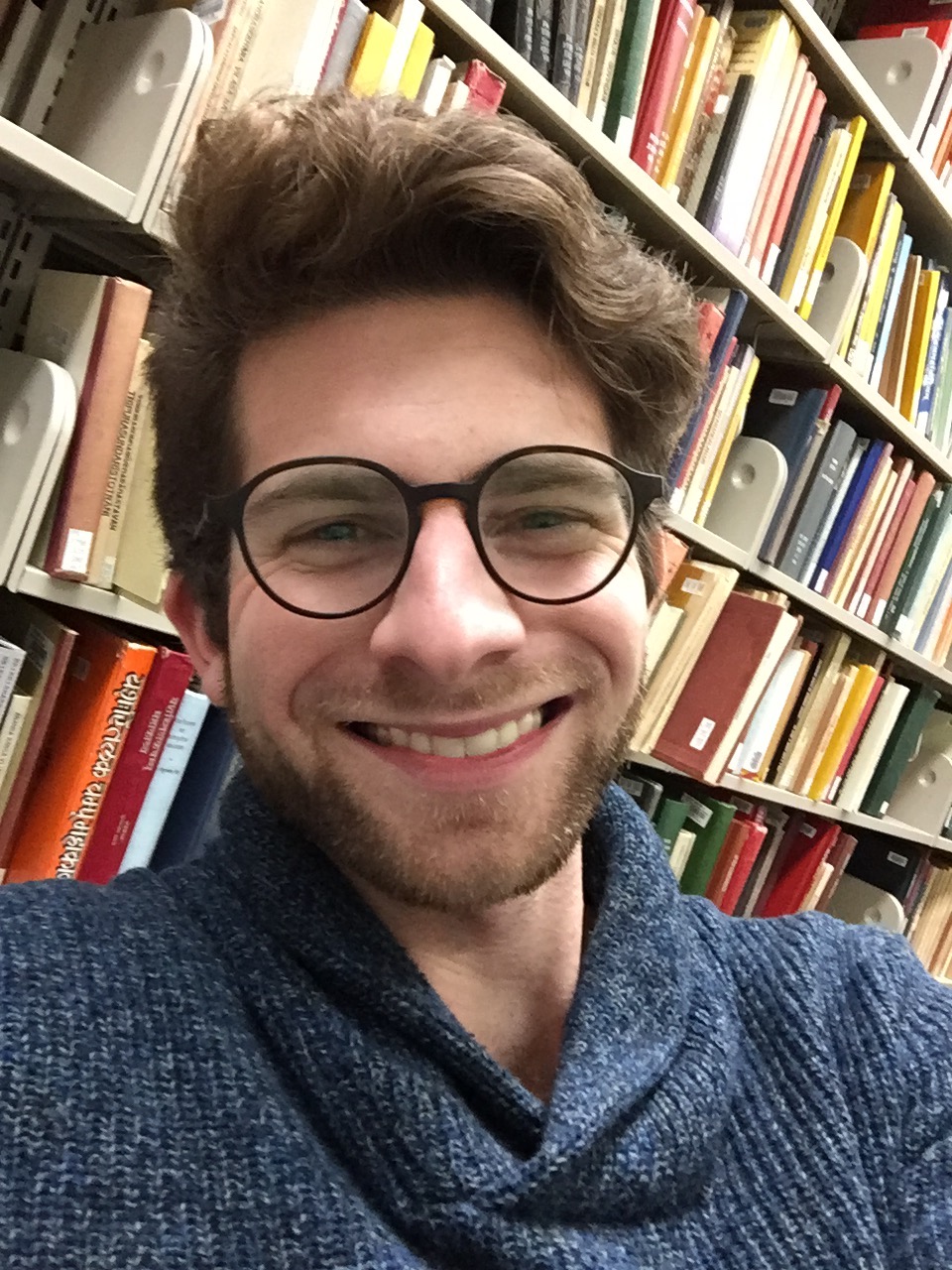 In my review of his Outstanding New Work– nominated play On Top, I referred to Daniel Karasik as “a scene-stealing character in the absurdist play that is the microcosmic politics of the Toronto theatre community… arguably better known for being yelled at by people on the internet than for writing plays”. He’s probably the most controversial figure in Toronto theatre, certainly in indie theatre, among people who generally agree with each other and are all Facebook friends. He’s verbose and thoughtful and delights in being a shit-disturber. His interview, predictably, comes with a warning. I’m not sure what kind of warning but something that combines “adult content” and “please don’t start a frenzy on our Facebook page when we post this”.

Can you remember your first experience with theatre?
Being taken to big musicals downtown when I was a little kid. Then wanting to enroll in Charactors Theatre Troupe in Vaughan, but needing to wait till I was eight (I was seven), because that was the rule. I remember this age limit felt very unjust. I couldn’t understand why eight-year-olds were deemed legitimate subjects, “real people,” while seven-year-olds were the subaltern. It seemed so arbitrary.

In 2015 you set off something of a firestorm in the Toronto theatre community with your play Little Death. Tell us a little bit about that experience, how you maneuvered it personally and how it influenced you as an artist.
I have a lot of feelings about it. But probably the most worthwhile thing to say is that my politics have shifted, or become more themselves, and in many ways I now agree with the criticism of Little Death that started that e-riot, the claim that the play was modeling toxic relationship dynamics. I still think it’s totalitarian (a shorter word is “dumb”) to suppress artistic representations of social ugliness just because they’re ugly and we don’t want the world to be that way—everybody who made that argument re: Little Death should read Maggie Nelson’s The Art of Cruelty, say five Hail Marys while staring at graphic depictions of Christ on the cross, then perform Sarah Kane’s Crave every day as a prayer at dawn—but that said, my play wasn’t really engaging with its own implied politics. I wrote it when I was 25 and still thought plays could be apolitical or trans-political, just about poetry and people and passions. They can’t, of course, since poetry and people and passions exist in, and are more or less determined by, repressive political structures that art can’t blink away.

I still find a lot of beauty in it, but part of that beauty is located in this tragic vision of men and women, this intuition that loving is always fairly likely to destroy you, that these days I feel is immature and, in effect, quite conservative. Like, here’s this spiritualized vision of love as suffering, as radical insufficiency and co-dependence, buffed by poetry, how stirring, how relatable, we’ve all (a lot of us) been there—but to what extent does that vision foreclose other possibilities for loving? To what extent is it complacent about a harmful liberal ethics, one that’s too transactional, too little about taking care of each other, in the erotic as in other spheres? I feel like it’s right to worry that that sort of art can reinforce bad social codes.

So yeah, I think there’s a smart and useful political impulse in how Erin Brubacher and others criticized that production of my play, it’s not a play I’d write today, though I also think much of the “controversy” around it was reductive. Like, the fucking Bechdel Test isn’t the point. The point is to represent both men and women (without essentializing Man and Woman as social categories! gender is a role we play!) with enough human fullness that lazy heuristics like the Bechdel Test aren’t necessary. And sure, some people believe the latter is a road to the former, but I think that’s bunk. A liberal Hollywood that embraces the Bechdel Test while reproducing the brutal ideology of American capitalism, e.g., is not progressive. Though it sure is good branding.

Since then, you seem to be constantly baiting the theatre community with your blog and social media posts. What have been some of your most memorable moments of instigation and do you fully support everything you put out or is there an aspect of performance art to it?
It’s definitely performance. But it’s performance that’s trying to tell the truth as best as I can make it out. I don’t post stuff that I consider insincere, though I do change my mind a lot. I’m provoked by Canadian consensus culture generally and by its microcosmic version in Canadian theatre. I think it’s a neoliberal phenomenon with its roots in class privilege, and deadly to political imagination. I want a theatre that makes people less governable, not more. I want a theatre that raises class-consciousness, not one that civilly fellates the bourgeoisie. I want a theatre that questions if theatre as an institution is adequate to its aims, which are bigger than theatre. And ultimately I want solidarity, not division for its own sake. But I want a solidarity built on thoughtfully argued principles, not a false one enforced by a harrowing of dissent.

I’d also say that different times call for different tactics. We’re seeing a global breakdown of the neoliberal consensus, which tricked a lot of people (me included) into thinking it was more or less permanent, “the end of history.” Pure provocation—épater le bourgeois, rattling the polite but brutal champions of that consensus—meant something different when it looked all but certain that the Clinton dynasty would bear the world into a grinding technocratic, crypto-imperial future a lot like the recent past. You can confront a politics of liberal respectability with scatology, you can moon it and that can do a kind of political work, can open up a space to imagine alternative ways of thinking and being. But mooning fascists gets you nowhere. Now pure provocation aligns you with anime Nazis. Political performance, and the performance of politics, needs to change as the world does.

Tell us about your nominated play On Top. Where did the idea for that play come from?
I was interested in how different kinds of power intersect. Military, economic, sexual. Difference valences of violence, literal and symbolic. The play’s about a marriage between, to be reductive, a neoconservative (or just plain conservative) woman and a naïve/idealistic classical liberal man. My friend Fannina seems to think it’s essentially a leftist play, though, and she dramaturged it, so I dunno. Around when I was writing it in 2015, she and I had this epic e-mail debate where I was like: “Fuck, I think I’m a conservative! I can’t get on board with the performative woke hashtag politics of these Honourably Thirsty Male Allies and other children of the ruling class! I’m such a conservative!” And she was like, “You’re a socialist.” (These are faux-quotes, I’m approximating. Also, cf. Kate Robinson’s wonderful piece in Jacobin about this particular self-definitional problem.) So then I spent six months reading people like Milton Friedman and trying to be so conservative? I.e. libertarian? To prove her wrong? But it didn’t stick. Fannina knows everything. Socialism or barbarism now.

But so, to your question, my feeling is that On Top is largely an artifact of that political confusion I was in.

Did you go through a lot of drafts? How did the play change through the development process?
Yeah, On Top is an overhaul of another play, which was an overhaul of a third play. They share almost no text, but I was pursuing many of the same ideas in each of them. Formally, the play(s) went from traditional drama to anti-drama, from an ornately wallpapered to a shattered fourth wall.

What’s your writing process like? Do you plot and plan or just start at page 1 and work through?
Anxiety, self-doubt, procrastination, delusions of grandeur, anger at criticism, acceptance of criticism, transcendence, boredom with project, postpartum haze. Plus writing, sometimes. I start on page one.

Your plays are designed to push the limits. Do you have a personal boundary you will never cross?
I think you should try your hardest not to hurt people. I think you should try your hardest to hurt bad institutions and bad ideas. That line—between attacking people and attacking institutions/ideas—is contested, but it matters to me. Yes, if you go after an institution you risk causing suffering to the people it supports. If you go after an idea, you may cause pain to those who identify deeply with (or profit from) that idea. You should try to mitigate those harms—your means should be consistent with your ends, as the anarchist David Graeber says—but they’re inevitable. The only way to keep your hands perfectly clean is to stay home. But outside of literal war, it’s almost never necessary to write or act with the primary intention to harm other people. That’s the germ of fascism, the will to domination for its own sake, and it’s in all of us, often rationalized, and the first revolution is to find it and reject it, cast it the fuck out. Which is a daily practice. But I want my work and life, future-tense, to reflect it. Few things are as important to me right now.

How do you approach casting your work? Are you ever able to find actors who fit perfectly with what you had in your head while writing? Do you write characters for a specific actor?
I try to work with people I think are exciting artists, with whom I feel I can build genuine solidarity, whose company I want to share, from whom I feel I can learn. The other issues in casting are secondary to those ones for me, at this point.

What are you doing now/ what’s your next project?
I’m in grad school in Chicago, trying to figure out if the theatre is worth giving a shit about or if I should try to find a different way to do radical politics for the rest of my life, since that’s pretty much all I care about now, that and the people I love.

Do you have anything you’d like to add?
On Top was actors Krista Colosimo Bonathan, Michael Goldlist, and Jess Salgueiro, and dramaturge Fannina Waubert de Puiseau, also seen above. (That was the whole creative team, besides me; we had no separate stage manager or designers.) They’re huge artists and beautiful humans, and working with them was a rare pleasure. Tarragon Theatre has my appreciation for hosting us.

Oh, and thanks for being so consistently kind to me, Kelly Bedard. It means a lot.