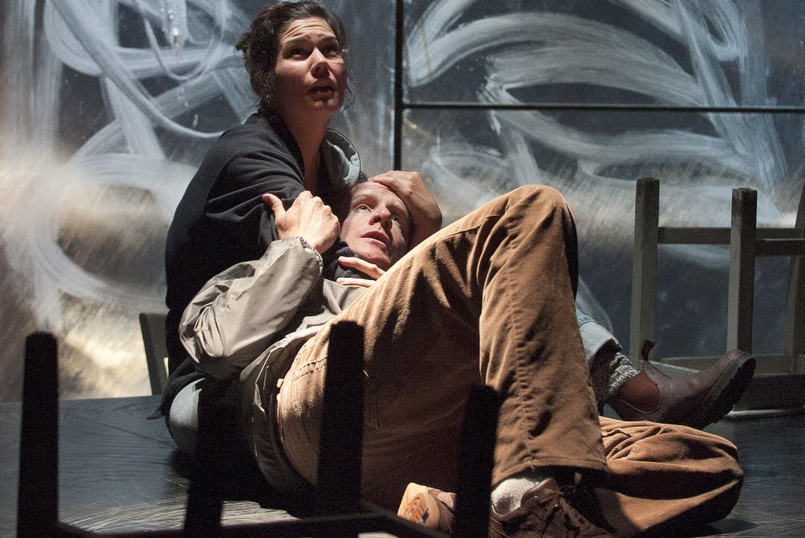 This was my first year reviewing The Shaw Festival, which turned out to be an utter delight. Aside from producing many of my favourite productions of 2011, the festival introduced me to the work of Krista Colosimo, one of our Best Actress nominees this year. Colosimo shone in a small but memorable role in Candida but she really made her mark in one of the best productions of the season: the generation-spanning Australian drama When the Rain Stops Falling.

Set to return to the Shaw this summer for her 7th season, Krista took the time to answer a few questions about her love of theatre, those standout performances and life at the Shaw.

Can you remember your first experience with theatre?
I am very fortunate to have grandparents that are patrons of the arts.  My grandmother and grandfather took me to my first ballet when I was only four years old.  I think that was probably my first encounter with live performance.  Throughout my childhood they continued to foster my love of the arts by taking me to the opera, symphony as well as theatrical plays.

What actors and actresses have always inspired you? Are they the same today?
A lot of the actors that inspired me when I was younger continue to astound me, such as, Diane D’Aquila, Kristen Thomson, Joseph Ziegler, Nancy Palk and Tom McCamus.  As I’ve entered the profession that group of people has vastly expanded.  The ensemble at the Shaw Festival is astounding.  While working there I have had the honor of performing with a number of very talented and very generous people.  Actors so good that every move they make seems effortless. Goldie Semple, Corrine Koslo, Deb Hay, Sharry Flett, Dona Belleville, these women have mastered their craft so exquisitely.  They are also beautiful people, always inclusive and always willing to pass on their knowledge and experience with emerging actors.

How do you think your experience at the National Theatre School was distinct from other training programs. Did it give you a leg up heading into professional theatre?
One of the things I enjoyed most about the program at NTS was the conservatory style training; the classes are all very hands on.  Every day you are exercising your body and voice as well as your mind.  It is extremely vigorous.  You are expected to be at school Monday through Saturday sometimes 12 hours a day.  The timetable, at times, was very challenging but you discover a lot about yourself when you are taken outside your comfort zone.  I think this business requires a great deal of stamina and discipline and my training at NTS definitely prepared me for that.

If you could perform on any stage in the world, which would you choose?
For me it’s not so much about location but about the work.  It doesn’t really matter to me what stage I am performing on as long as I believe in the work it doesn’t really matter if I’m performing in a small studio space or a large theatre.  What is important to me is the quality of the work and the affect it has on the audience.

How did you get started at the Shaw Festival?
After graduating from theatre school I moved home to Toronto.  I didn’t have an agent so I submitted myself for the Shaw general auditions and was lucky enough to get an audition.  A few months went by and then two weeks before they wanted me to start I got a call with an offer of an apprenticeship.  I worked two seasons as an apprentice before becoming a full member of the company.

You were in a period Shaw play (Candida) and the modern Australian piece (When the Rain Stops Falling) last summer. Is either style easier for you to get in to?
Each play presents its own set of challenges.  When working with the classics, especially plays by Shaw, the text can be the biggest challenge; breaking down the arguments, making sure they are clear both to you and the audience.  When the Rain Stops Falling was a show that required a lot emotionally.  It was scary going to the dark places that the character Gabrielle visits, but with each run of the show it was easier to access those emotions.

Describe the rehearsal process for When the Rain Stops Falling.
A labor of absolute love.  Right from the beginning it was clear how invested the cast, our director, and crew were to this production.  We all knew that we were dealing with a brilliant script that had the power to really move people.  Knowing this obviously put a lot of pressure on the group to create something that was worthy of the text. Our director, Peter Hinton, is in my opinion one of the most thought provoking directors in the country.  He is able to think and work outside the box.  He challenges his actors to reach the excellence that he knows they are capable of all the while maintaining a great deal of sensitivity.  The play is an ensemble piece weaving scenes of past and present together throughout the show.  At first we worked specifically with our scene partners but very quickly we began working together as a group.  We would work on larger sections of the piece tackling three or four scenes at one time.  The piece was an emotional roller coaster and at times difficult to stage but every moment of heartbreaking frustration was worth what we created on stage.  I cannot think of a production I am more proud to be a part of.

Did you struggle at all with the accent?
Yes.  I had never worked with an Australian accent before and was anxious to get cracking at it as soon as possible.  Even though we didn’t begin rehearsals for When the Rain Stops Falling until mid/late summer I began working with the voice coaches in March when I began rehearsals for Candida.

Everyone in that play is linked, did you spend much time comparing notes with the actors playing your predecessors and offspring?
We did a lot of work together as a cast initially.  Then as the process went on we would find moments to share with one another independently.  Wendy Thatcher and I played the same character at different ages and we tried to stay in tune with one another throughout the process.

Do you have a favourite moment from that production?
To be honest I love that production so much it would be hard to pick just one moment and because each show is different from night to night my favourite moments would often change with each performance. The character I played was a really tough young woman who had experienced a lot of tragedy at a very early age.  Needless to say she is a very guarded character so the moments where she opens up were lovely to play.

Do you have any dream roles you think are perfectly suited to you or something completely against type you’d love to try as a big challenge one day?
I love strong female characters and at the end of the day those are the women I want to be playing. Hedda Gabler, Queen Margaret, and Phaedra are a few I wouldn’t mind playing one day.  I’m also a cowgirl at heart so I’d love to be in a Sam Sheppard play one day.

Which directors and actors have had a major influence on you throughout your career?
Peter Hinton is someone who has had a major influence on me.  I worked with him at theatre school and I was very happy to discover I was going to be working with him again.  Working with Peter challenges me to think differently; to really be specific about my character choices and to push myself further and further outside my comfort zone.  He sets the bar so high for himself one can’t help but be inspired to meet him there.

Do you try and see every play in the season? What were some of your favourites of 2011?
Yes, I try and see all the plays in the season.  I’ve done well so far; in my six seasons I have only missed one and a half shows and that was because of scheduling.  My 2011 favourites were My Fair Lady and Top Dog Under Dog.

What are you set to play next season at the Shaw?
This coming season I will be playing Hypatia in Misalliance directed by Eda Holmes and Molly in His Girl Friday directed by Jim Mezon.

When do you start rehearsals for summer 2012? Any word on what the productions will be like?
I begin rehearsals for Misalliance this month.  So far I haven’t heard much about either production except that Misalliance will be set in a different time period than originally written.

What are some of the challenges of repertory?
One of the major challenges of Rep theatre is the schedule.  Depending on what track you have you can be doing up to 8 or 9 shows a week.  Other years you might get lucky and have a lighter workload.  Maintaining the level of energy needed to keep up with the performance schedule requires a good deal of stamina and, for me, discipline.  If I’ve got a heavy week or working on a show that is mentally or emotionally taxing I know that I might have to make some sacrifices to my social life.  Physical exercise, healthy meals, and early nights are usually what I need to keep me in shape for the shows.

Do you see yourself as someone who’d like to stay with Shaw for many seasons?
I very much enjoy working at the Shaw.  I have been given many opportunities there that have allowed me to develop as an artist and to learn from some of the best theatre makers in the country.  I’m going in to my seventh season this year and even I find this hard to believe.  Time has flown by so fast.  I try to take things year by year.  Shaw works on a contract-to-contract basis and like many jobs in the arts there are never any guarantees.  I am sure at some point either the Artistic Director or myself will decide that it is time for me to have some other experiences outside of the Shaw, however, I hope the Shaw Festival will always be a place I can continue to come back to in the future.

If you could pick one definitive moment in your career up to this point, what would it be?
I think it would be performing in When The Rain Stops Falling.