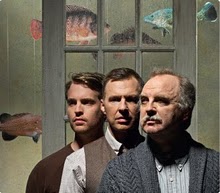 At the Shaw: When the Rain Stops Falling

There are a few truly stunning productions at the Shaw Festival this year- the top 5 in my rankings all really impressed. One of the most creative, most interesting, most effectively executed productions I’ve seen in quite some time was When the Rain Stops Falling in the Studio Theatre. With a criminally short run, you were very lucky if you got to see this special production, a 2 hour and 15 minute, intermission-less exploration through time and the generational ties that bind.

The best in the incredibly strong cast were Krista Colosimo’s gruff young Gabrielle York and Jeff Meadows as the love of her life, Gabriel Law. The indelible chemistry between the superbly grounded Colosimo and the always lovable Meadows rooted the whole production with a ray of light amongst the gloom and a touch of hope for two hopelessly broken human beings. Wade Bogert- O’Brien was my other favourite as Andrew Price, the timid, nervous and bitter abandoned son of Gabrielle and Gabriel’s son.

Spanning two continents and 80 years between 1959 and 2039, Andrew Bovell’s ambitious play fits together five generational stories as fascinating pieces to the same familial puzzle. Inspired by a Francisco Goya painting of Saturn devouring his children, When the Rain Stops Falling is about the pain we cause our children, the world we leave them and the flaws we pass on. Using clever repeated motifs to link the characters through time, Bovell’s piece is challenging but surprisingly not confusing.

Peter Hinton’s direction and Camellia Koo’s brilliant design (with fantastic lighting design by Kevin LaMotte) set the tone of the piece from the moment the rain began, abandoning concrete time and place in favour of functionality, continuity and the invaluably gray gloom that lingers over the whole piece as the rain beats perpetually down. The action revolves around and on top of one large table with a designated place for each character, as though, despite the years between their existence, they’re perpetually participating in one large family dinner.

It’s an exceptional piece of theatre, a superb acting achievement all around, masterfully directed with Hinton’s restrained but poignant eye for suggestion. A rarity and a highlight in the Shaw season.