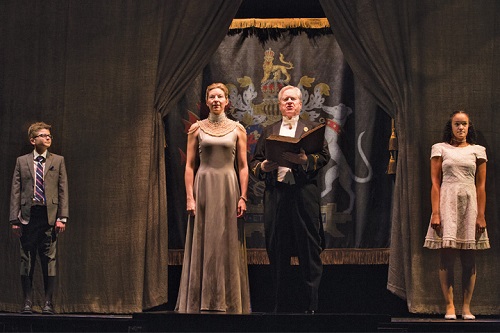 From Stratford to Soulpepper: The Last Wife

Kate Hennig’s contemporary history play traces the story of King Henry VIII’s sixth and last wife, Catherine Parr (Kate) – beginning with his awkward and aggressive pursuit of her, her negotiation of their marriage (and sex life, which was pretty impressive), to Kate’s attempt to be both a mother and political advocate for Mary and Elizabeth, Henry’s daughter’s that he spurned in favour of his smart (but weak) son, Edward.

The play is historical fiction or, as Hennig herself puts it: “an imagining of history.” The language is contemporary and the costumes are a mishmash of 21st century fashion with occasional references to the 16th century (Elizabeth’s neck ruff makes an appearance towards the end). Add to that the fact the child Elizabeth (Bess) is played by an adult (Bahia Watson) though she managed to hit the right balance such that the cognitive dissonance of watching an adult play a child was interesting and effective rather than absurd. Her emotions were real, and she didn’t overplay Bess’s anxiety at her father’s volatility, which I appreciated. Mary (Sara Farb) is the more centred, sassier sister in this play, and had the sexiest costume consisting of a black and red goth dress, with platform heels to match.

In effect, the play is designed in many ways to give us impressions of the players, rather than accurate depictions of them. Kate (Maev Beaty), seems almost like a 21st century woman, trying to make a family but also live a kind of dream of being a woman with political power (slyly foreshadowing Elizabeth’s reign). The heart of this story is her marriage to Henry VIII (Joseph Ziegler), which starts out strained but over time they develop a kind of rapport and intimacy.

Hennig’s depiction of the relationship is interesting, but there was something kind of dissatisfying to me about the execution. Ultimately, I think Ziegler’s Henry didn’t quite match either the historical Henry or Hennig’s portrait of him. Ziegler is obviously an excellent actor, and he captured Henry’s charm, certainly, and also his moments of vulnerability. But Henry VIII, while charming, and obviously deeply insecure, was also a terrifying man, a tyrant. So terrifying that at one point he almost allows his sixth wife to be killed, a move he pulls after she threatens his political status by offering continued help after his return from France. I could see Ziegler acting scary, and the other actors acting scared of him – and while this would maybe be sufficient for another play, it really felt like we, the audience, needed to be genuinely, profoundly, viscerally scared of Henry for the emotional tone of the play to really resonate, and for the relationship to have all the notes that Hennig had set out to capture.