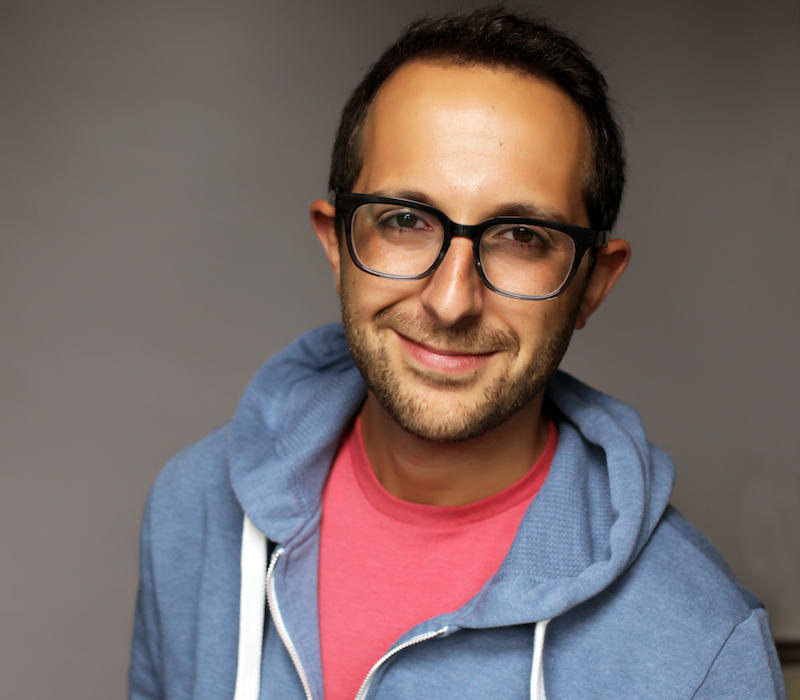 Outstanding Supporting Actor nominee Michael Musi played frantic intern Davey in Theatre Brouhaha’s TV/theatre mashup Late Night with ZoomerLive. Read on to find out how the complicated play got on its feet, which late night host Michael would be willing to intern for in order to play with puppies, and why he hates Danny Pagett.

Do you remember your first experience with theatre?
I was 11 years old. I believe the first play I was ever in (and wrote) was in my cousin’s basement on Christmas Eve. It was called Millennium. I played a customer in a corner store who finds out the world is ending. In between scenes, my sister would flicker the lights while my cousins and I would dance and do flips to Will Smith’s classic hit “Willennium”. We charged each family member $50. I am not kidding. All my uncles were so drunk they would pay it. I’ve never made so much money as a performer in my whole life.

How did you get involved with Theatre Brouhaha?
The first audition I ever had in Toronto was for Theatre Brouhaha’s first play LOVESEXMONEY. I had a bunch of callbacks but the role ended up going to Danny Pagett (Who I hate. Kidding. Kinda.). I kept going in for their auditions dying to get cast. They were doing things no theatre company was doing and I was desperate to be a part of it. I finally got cast in Retreat and had the best time.

How did the process of developing Late Night compare to your past Brouhaha/Sandler experiences?
Late Night was different because there was money involved. We rehearsed Retreat in the May Cafe’s stinky basement with no windows. With Late Night, we were in a big beautiful building with free coffee and a ton of people helping out. But the process was essentially the same. Kat has a very specific way of working and she stayed very true to her process.

Kat Sandler famously works with her actors to change the script throughout the rehearsal process. In what ways was Davey shaped by your voice in the room?
Kat is a machine. She writes plays faster than I pee. She is insanely open to new ideas and opinions. Her characters always change quite a bit in the room because she wants the actors to feel as comfortable as possible with what they have to do and say. She lets you find your own character, she doesn’t try to mold you into her pre-conceived ideas of who the character is. She has a lot of trust in her cast, but she is always pushing you to explore deeper.

You ushered the audience in and vamped before the play started. What were some of the best moments to come out of all that improv?
I loved getting to feel out the audience before the show. Unfortunately, a lot of people that I knew had no idea I was in character, so they were pretty taken aback when I didn’t hug them back or ignored their waves. I had to break character once and tell a friend to sit down and stop talking to me.

If you could actually intern on any late night show, which would you pick and why?
I would probably go with Jimmy Fallon. I don’t think he’s the best interviewer, but it seems like such a fun time. He also often has puppies on the show so that’s pretty ideal.

The production utilized a lot of live technical effects with the TV cameras and one performance was broadcast on television. What was it like working with that element of the show?
It was strange. Juggling those two things made it difficult at times. When you have a camera in your face, your instinct is to bring things in. But then you also have an audience there to see a play, so you have to make sure that you’re seen and heard. It was a great experience and I learned a lot from it.

Do you have a favourite moment in the production?
I would say my favourite moment was just being there. The cast was nuts and we had so much fun. Working with Maria Vacratsis was definitely a highlight. Being a Greek Canadian myself, I’ve seen My Big Fat Greek Wedding probably 15 times. She’s so funny and lovely and I can’t wait for her to play my mom in Kat’s next play. Get writing, Kat!

What’s your most recent project?
Playing Tim Allgood in Noises Off at The Segal Centre in Montreal. It’s been a dream! Jacob Tierney directed it and he is all kinds of wonderful. I love being in my hometown doing a show that is nothing but laughter and joy.

Do you have anything you’d like to add?
Thank you so much for the nomination! I love My Entertainment World!