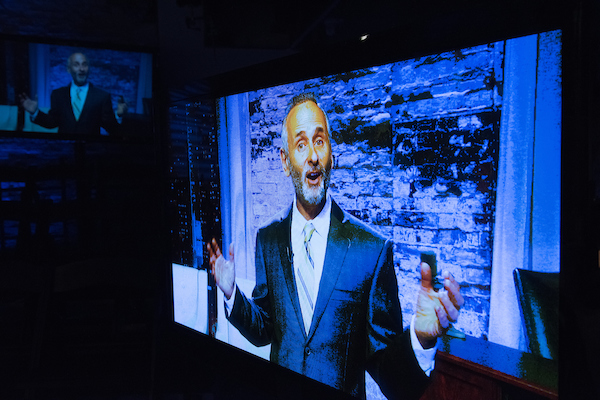 Theatre about TV, created by theatre producers, produced by TV creators, staged like theatre on a TV stage, shot like TV to be seen as theatre- this is the contradiction that is Late Night, the latest from writer/director Kat Sandler and her indie hit-making company Theatre Brouhaha (executive produced by ZoomerLive’s Moses Znaimer).

Sandler’s writing has always had a quick and accessible TV quality to it, something that Brouhaha has long embraced by marketing their shows to what they call “The HBO Generation”. Late Night takes that approach quite a few steps further, blurring the line between the two mediums by inviting the audience into the immersive atmosphere of TV studio ZoomerHall to attend a live taping of “The Early Late Show with Marty O’Malley”, a fictional late night talk show that’s in the process of transitioning from their veteran male host (Alon Nashman) to a rising star female one (Kat Letwin). We’re greeted by nervous intern Davey (Michael Musi, a comic relief godsend delivering my favourite performance of the night) and dodge cables and cameras as we take our seats in the live studio audience to witness Marty’s final show and the introduction of new host Sarah Goldberg. Some nights will be recorded for broadcast on Vision TV but even the purely theatrical performances use live cameras and screens to highlight what the “audience at home” is seeing.

The announcements from Maria Vacratsis’ refreshingly frank character Alanna (is she the director? The EP? Hard to tell) that we’re going to or coming back from commercial bring about dramatic shifts in certain characters that reveal the gulf between their public and private personas. This, along with the ace technical execution, is the play’s strongest element. What jokes can Sarah make off the air that would hurt her brand if taken out of context? How does the manufactured perfection of Marty’s marriage to movie star Vivienne Lawrence (an amusingly unhinged Rachel Jones) boost his popularity? How much anger and resentment and imperfection can these people let through the cracks in their personas before they lose the audience’s love? There are a lot of fascinating questions at play in Late Night that touch on sexism, ageism and a boatload of complicated double standards but a key casting misstep and uneven script leave much of that intriguing territory under-explored.

The principal problem with Late Night is Marty, Alon Nashman’s aging TV host who stands in stark contrast to Kat Letwin’s dynamically played and well constructed Sarah. Znaimer’s company Zoomer Media is focused on a 45+ demographic so it’s understandable that the executive producer would be most interested in focusing on the Marty character, an emphasis that’s reflected in promotional materials that highlight Nashman and the play’s themes of aging and ageism. The trouble is that Znaimer is producing a pre-existing script (written for the 2014 Fringe 24-hour Playwriting Contest) and the story the millennial female playwright is telling is much more effective in its arguments about sexism than ageism, though it all gets muddled in the hijinks-heavy back half.

In his opening “on-air” monologue full of hack-y jokes, Marty proves that he deserves to be replaced. Throughout the evening, Marty kicks up a mighty fuss about the unfairness of his forced retirement but he also continues to disprove his own points about ageism by being simply bad at his job. He drinks too much, has no professional boundaries, knows nothing about his guests, is out of touch with the absolute basics of modern society and, most importantly, isn’t funny. Whether he was ever really funny we’ll never know, though Sarah swears he was and it’d be helpful to her credibility if we could believe her. A less awkward actor with the sort of charisma that could believably carry a mediocre man through a remarkable career would help matters but a back-to-the-drawing-board re-write of the character seems necessary to make Marty’s story even a hint as interesting as Sarah’s. By highlighting Marty’s perspective, Sandler teases the audience with the potential of a really complex situation wherein everyone is accidentally the villain in each others’ stories but Marty as he’s written and played here can’t carry that much weight; he’s an obstacle who thinks he’s a co-protagonist and his incompetence undermines everything from Sarah’s taste in mentors to whether “The Early Late Show” is even worth saving.

Late Night is one of those situations where one weak part sets off everything else. Everyone in Late Night revolves around Marty- they work for him, beside him, because of him- so, if he doesn’t work, nothing does. Which is a real shame because Letwin, Musi and Vacratsis are delivering some of their best performances to date in a particularly well-directed piece of technically impressive theatre. It feels as though Sandler picked the simplest road while writing her time-limited first draft- highlighting entertainment industry double standards by contrasting a deserving young female lead with an undeserving male predecessor- then changed direction to suit Znaimer’s older demographic and ended up off course.