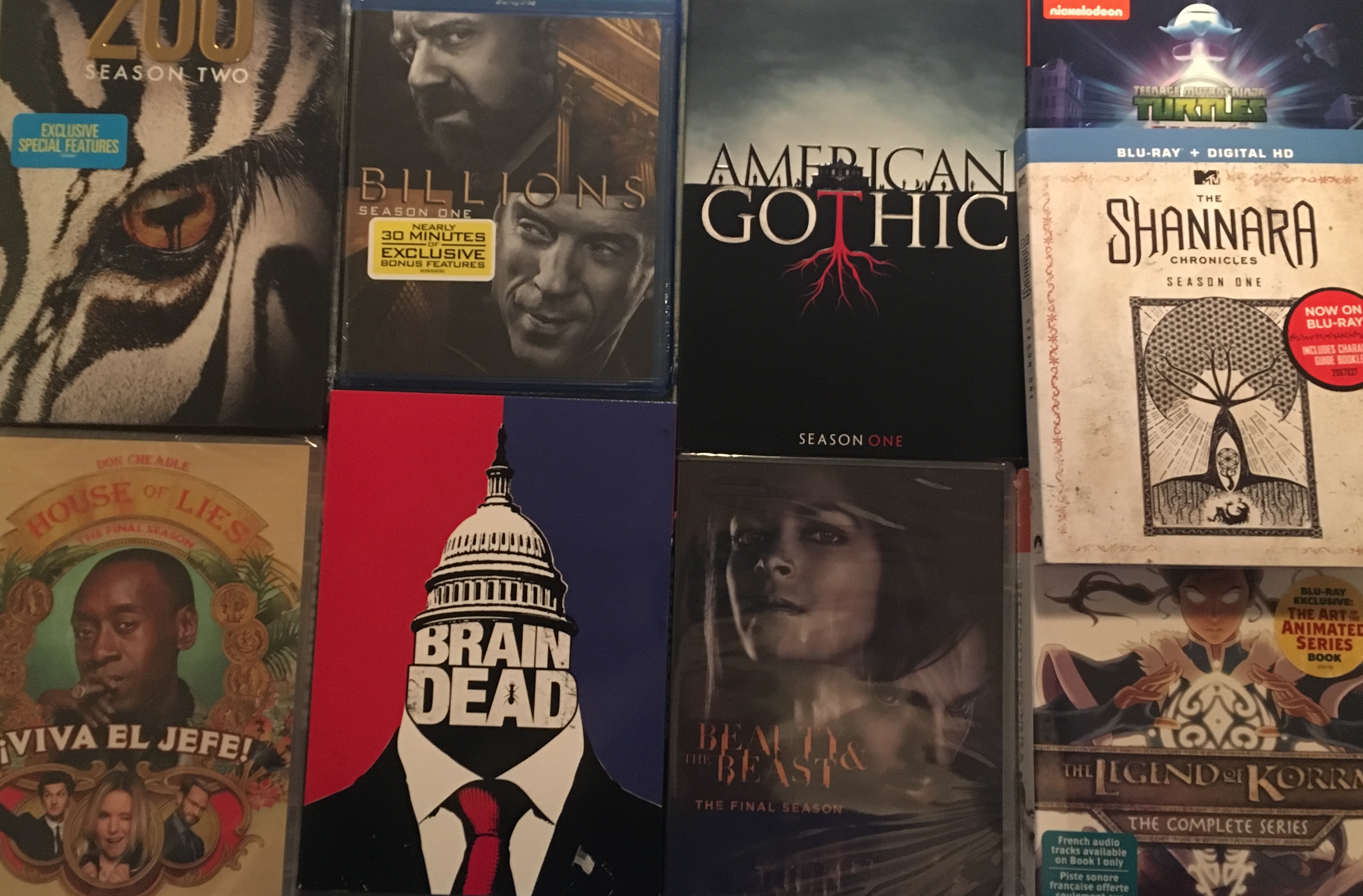 Billions (Season One)
I was really into this well-cast thriller about big money people, at least at first. It made the cut to score multiple MyTV Award nominations in the acting categories and this Blu-ray comes with some solid special features (though not enough content from the creators that deals with the show on a story level and I would have liked a featurette on the real life world the show draws from). I find most capital D Dramas dull but Billions has some bite.

House of Lies (The Final Season)
Wrap up the set with the final season of this truly weird corporate dramedy. In season five, Kristen Bell continues to delight in a mis-cast kind of way and Clyde holds down a pretty fun political story as Ben Schwartz proves once and for all that he’s just the freaking best.

BrainDead (The Complete Series)
I don’t want to talk about it anymore. I’m fairly heartbroken and a little bit angry that this absolute gem of a bizarro political allegory was killed before its time. A perfect cast, a delightful tone, a poignant (and timely) message, and those musical recaps! Read my post-mortem and buy this DVD because a) cancelled-too-soon shows often are hard to find after the fact, b) the special features are fantastic, c) it’s a fully self-contained story in a single DVD purchase, d) if it sells well on DVD maybe the CBS execs who cancelled it will feel bad about themselves, e) it’s too good to be forgotten.

Zoo (Season Two)
James Wolk continues to be the dreamiest dreamboat who ever dreamboated. He also continues to play a “maverick zoologist” on this totally insane CBS thriller. It’s dumb. A little bit fun and a tiny bit interesting but mostly dumb. But it’s also a James Wolk delivery device and since everyone else seems determined to cancel those by the end of one season (at best), it’s a miracle this one made it through season two.

Beauty & the Beast (The Final Season)
The CW’s hot mythological stories phase is coming to an end as they go all-in on half female-led kooky dramedies and half Berlanti-verse DC-TV. It won’t fully be over until Supernatural says goodbye but the final 13 episodes of this hyper-dramatic fairy tale adaptation/cop procedural signals the real end of an era.

The Shannara Chronicles (Season One)
A brazenly earnest fantasy adventure in the Xena tradition, adapted from Terry Brooks’ novels, this New Zealand-shot MTV series is bold and happily weird, which not enough things are, especially not on MTV.

American Gothic (The Complete Series)
Another complete series because CBS has a quick trigger finger, American Gothic had a promising concept and a lack of fulfilling follow-through. Shot in Toronto, it’s full of hometown locations and fun theatre community cameos, though (Tim Walker is in the first episode!).

The Legend of Korra (The Complete Series)
High-minded, ambitious and just-complicated-enough, this complete series is a must-have for fierce, adventurous kids who like mythology and kickass female heroes (which they all should). The 5 hours of bonus features are, well, bonus.

Teenage Mutant Ninja Turtles: Earth’s Last Stand
This series is dumb. Cut it out and show the kids the weird ’90s live action versions instead. “The Secret of The Ooze”!!!