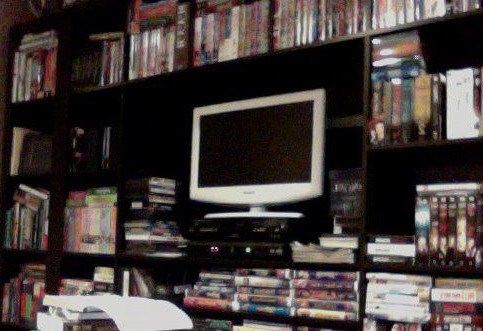 TV on DVD: Paramount in August

In the spirit of keeping my favourite things alive, here is another edition of the TV on DVD series.

I come at this particular item in the series somewhat ironically, having just spent an entire day of my life (literally an entire day, with one two-hour break for sushi) consuming Hannibal on Netflix. But the fact remains that TV on DVD was my first binge-watching love and remains my unparalleled favourite way of watching TV. Even though my TV has a handy dandy Netflix button that took The Good Wife off of my tiny laptop screen and into utterly convenient flatscreen goodness, the end of season four (where Canadian Netflix abandons Alicia & Co) meant the beginning of my brand new Season Five DVD (the new release being the only DVD I have of the show) and all the wonderful menus and features that come with the familiar medium. Sure, the discs run the risk of being eaten by Toby Ziegler-Bedard, my insatiable Bernese Mountain Dog, but they sure do look pretty lining my black book cases (the actual books have long since been hidden away) organized chronologically by showrunner after first being divided by genre and network (obviously). If you somehow still doubt me, observe the photo of my actual DVD shelf to the right. This was about 5 years ago; I assure you it’s grown substantially since then (especially since no one buys DVDs anymore and I can snag a box set for $5 at BMV).

Onto the new releases in question:

The Good Wife, Season 5
Inarguably one of the strongest dramas on network TV, The Good Wife is that rare show that beautifully combines procedural and serial elements with consistently strong writing and a really good ensemble cast. It’s just solid TV, no matter which way you slice it. *somewhat vague spoiler alert* In season five the show took a huge risk by granting an actor’s wish to be let out of his contract. With a cast this strong, the loss of any one of the major players would have hurt, but Josh Charles was pretty much the reason I started watching this show in the first place (Dan Rydell will always own my heart), so seeing him go was a tough break. But showrunners Robert and Michelle King made the most of the off-screen development by sending fan favourite Will out in a blaze of glory that was one of the biggest twists of this past TV season. Said key episode is explored on the newly released season five DVD in the set’s best special feature: the three-part “Requiem for a Friend”. There’s also a “New Season, New Alicia” feature, a music video, a gag reel and some deleted scenes (no audio commentary, though, which is dumb when you have a cast this charming and showrunners this interesting). I say this is one to buy, if only to adequately bid farewell to the great Josh Charles.

NCIS, Season 11/NCIS: LA, Season 5
The wildly lucrative CBS procedural stalwart and its slicker LA spinoff (starring my eternal crush Chris O’Donnell) keep on keeping on as they celebrate their 250th(!) and 100th episodes respectively. This is perfect spontaneous watching TV- like House in its heyday or Bones before it got boring- with high drama and self-contained stories that are great for a single 42-minute pop without worrying about watching every episode. But if you do watch every episode, you care more when one of the characters is taken hostage (which happens, because this is NCIS). Though NCIS is the sort of television usually consumed fairly passively, the folks in charge still decided to grace happy DVD purchasers with ace extras. Both shows have audio commentaries and plenty of featurettes (including one for each of those landmark anniversary episodes). Other bonuses include a look at the LA writing staff while the flagship show honours late actor Jackson Gibbs with his own mini-doc. The original show’s DVD also manages to find space for something called “NCIS in New Orleans” which definitely has nothing to do with CBS’ new show NCIS: New Orleans. I’m not really sure why anyone would buy such a syndication-friendly show on DVD but, if they do, they’ll find extras (if not episodes) definitely worth their money.

Elementary, Season 2
The second season of this passable but still somewhat disappointing modern Holmes tale continues to showcase Lucy Liu at her best (as a modern, no-nonsense female Watson) yet still lives firmly (and forever) in the shadow of the massively beloved BBC show that shares its source material. A single audio commentary isn’t quite enough in the face of some fairly shallow featurettes but at least there are features to be had here. A little too repetitive to marathon like one normally does with a DVD but Elementary is certainly more interesting than your standard investigation show.

Criminal Minds, Season 9
The Season 9 DVD of this CBS hit could be a metaphor for the series as a whole. It’s incredibly standard; to the unfamiliar eye it’s hard to tell your NCIS from your Criminal Minds from your CSI. The DVD, with its standard collection of commentaries, deleted scenes and a gag reel, is pretty commonplace as well. But Criminal Minds is such a huge hit because it does standard well, hitting on the most interesting thing about other investigation shows (the psychology of the killers) and putting it front and centre (don’t you sometimes wish Bones was just about Sweets? I definitely do, but with Hodgins as a sidekick). Like the show, the features here aren’t high-concept but they’re the features that are always effective- 1) audio commentaries, 2) gag reel, 3) deleted scenes. Works every time. Also, Jeanne Tripplehorn.

The Millers, Season 1
My god what an obnoxious show. In my sitcom roundup of the 2013-14 TV season, I declared The Millers the “Worst Show That Will Live Forever”. It’s charmless, derivitive and grating, but it’s also commercial, cheap and easy to promote. With Two and a Half Men entering its final season, we have years of Miller hell ahead of us (here’s hoping staff writer/Harvard alum/Survivor winner John Cochran can spice things up in season two, because I always want to believe in Cochran’s ability to pull out a win). The special features here show off the utter cluelessness of this whole team, including lazy extras like the launch promos and a season in review and just two featurettes, one spotlighting each of the two least likable people on the show: Will Arnett and JB Smoove. Jayma Mays and Margo Martindale are both underused in the show itself, its special features, and its promotion but if there’s anything in The Millers worth spotlighting it’s Beau Bridges. I would have made the extras just a series of interviews with Beau Bridges. In fact, I would like this whole show a lot better if it was just a series of Beau Bridges reaction shots cut together.

Californication, The Final Season
The special features simply don’t exist here (previews of other Showtime shows do not count as special features) so this comes down to one simple issue: how much do you like Californication? One of those shows that most people thought ended years ago, Californication was actually fairly groundbreaking considering no one seemed to really watch it, let alone like it. A key player in the selfish asshole-as-protagonist genre (which, let’s face it, is cable TV’s most prominent and successful genre right now), David Duchovny’s Hank Moody is left in justified limbo as his 7-season run of destruction comes to a close. So, no real closure here. The good news is that the final season has plenty of Michael Imperioli and who doesn’t love Michael Imperioli?

Now & Again, The Only Season
Now this is what you buy on DVD. This is why TV on DVD is such an awesome concept. This is why TV on DVD should live on. Here’s a quickly canceled show that you likely have never heard of and, were it not now being made available on DVD, likely would have been forgotten forever. You can argue that new mediums allow resurrections like this to happen even more frequently because streaming cuts manufacturing costs, but this is a good example of the power of DVD. A high-concept, philosophical, character-driven sci-fi series like Now & Again requires your patience. Pilots for this sort of thing never capture what the show will eventually be (I speak from experience since I almost made the horrific mistake of bailing on Firefly after that boring rebellion sequence that kicks off the pilot). Netflix is awesome, don’t get me wrong, but the power to nix a show ten minutes into the pilot is a dangerous one that will result in a lot of great stuff getting missed. If you own the DVD, you’re probably going to give the show a real shot- at least a disc of two- and you might discover something you really love and can watch again and again and always find new things (you gotta love really complicated shows). A fantastic slew of in-depth special features helps. And, admit it, you’ve always thought Eric Close should star on his own show. Before he became the mayor of Nashville, even before he charmed  you on Without A Trace, Close played a role that his bizarrely symmetrical face was perfect for- that of a genetically bio-engineered superman, obviously.