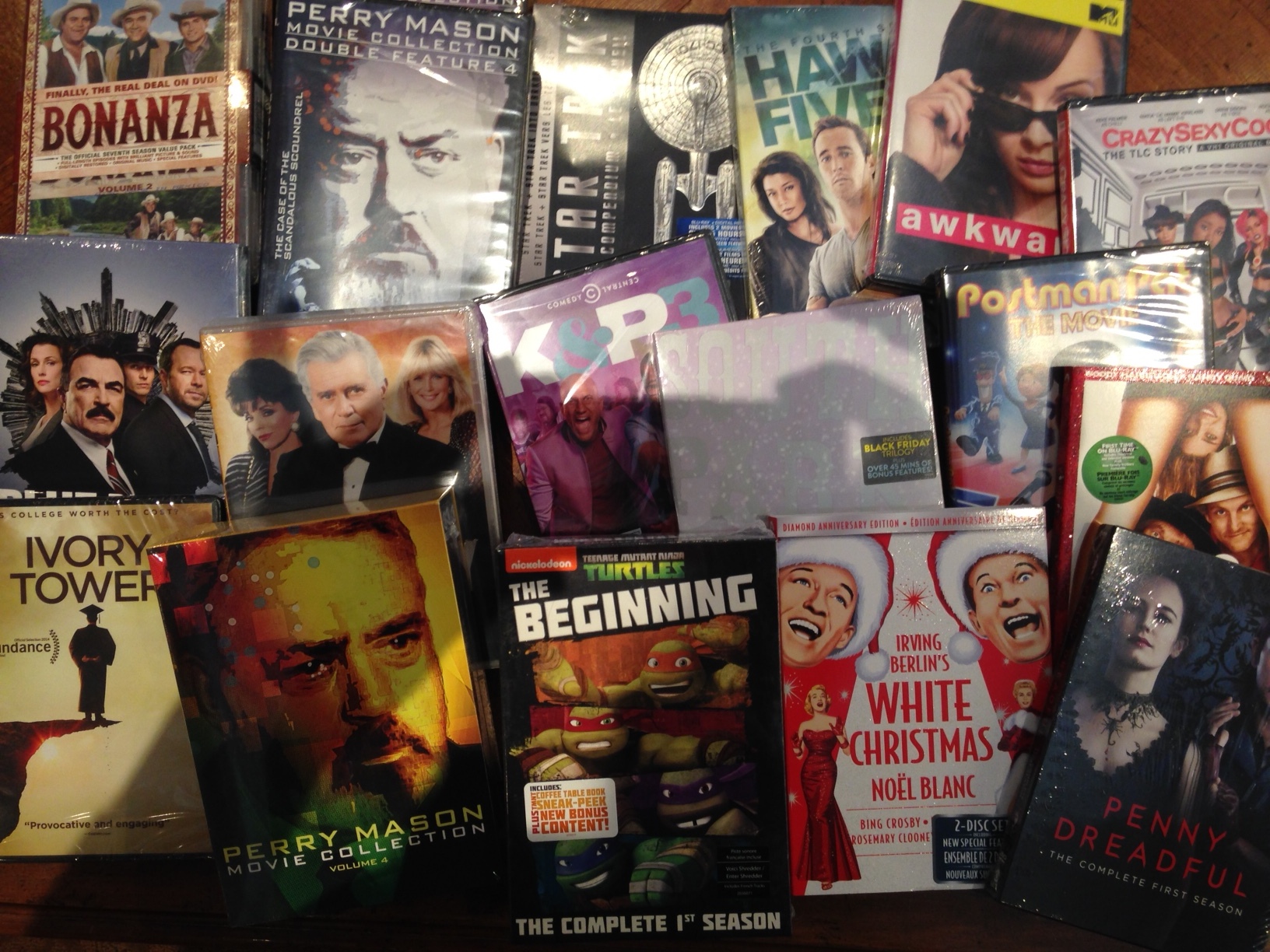 Netflix be damned, this month alone I raced through the first season of Game of Thrones, the third season of Mad Men and the fifth season of The Good Wife, all on the great and sadly dying medium of TV on DVD (Netflix, by the way, only has one of those three things available in Canada at the moment). As part of the effort to keep my favourite entertainment consumption medium alive, here’s the latest instalment of my TV on DVD series featuring new releases from Paramount (not technically limited to TV):

Bonanza, The Seventh Season
This was the defining TV show of my father’s childhood. It’s the quintessential western TV classic and, even without Pernell Roberts (who left a year before), season seven delivers the classic Bonanza sweetness and fun (with plenty of romancing from eternal charmer Little Joe!). Lots of special features make the two fairly pricey volumes that make up the season totally worth it.

Blue Bloods, The Fourth Season
This CBS family/police drama has been an excellent Friday performer for the first-place network. In its fourth season, the strong ensemble (including strapping patriarch Tom Selleck and dreamboat Will Estes, star of my old favourite American Dreams) navigates some seriously high drama as the Reagan family is tested both at home and on the job. Extra points for a pretty good selection of special features including multiple featurettes and commentaries.

Dynasty, The Final Season
This special feature-anemic two volume DVD set is worth plenty of 80s nostalgia but I don’t see how it’s necessarily worth actually owning (especially at $43 a volume). Dynasty is all about the twists, the drama, the shock- and the final season is definitely big on all of that- but, once you’ve seen it once, a lot of the initial fun goes out of it. With no insider interviews or behind-the-scenes drama to be found on the DVDs, the re-watch value isn’t really there.

Star Trek, The Compendium
At $40, this 4-disc blu-ray is a steal for anyone who even sort of liked JJ Abrams’ adaptation of the classic series (though enough of the features are recycled that it’s definitely not a must-have if you already own the DVDs). The revamped (and, in my opinion, awesome) Star Trek and its (in my and most opinions, less awesome) sequel are in top form here (both are in HD, Into Darkness is the IMAX version) but it’s really the wealth of special features that makes this set stand out: commentary with the right personnel (writers! Yes, we all love Quinto, but writers are the ones with the most storytelling insight) and featurettes about everything from casting to sound design to the press navigation it took to keep the secret of Benedict Cumberbatch’s role in Into Darkness.

Key & Peele, The Third Season
The Van and Mike Show is the only real special feature on this DVD (the Best of Seasons 1 & 2 super episode doesn’t really count because you should totally own that full box set already), which is unfortunate because, with creators as fun as Key and Peele, interviews and commentaries would work as a great incentive to actually buy the DVD instead of finding the sketches online (a sketch show doesn’t lend itself to that many featurettes but a commentary or two and at least one feature about, I don’t know, character makeup, would be nice). That said, season three of this ace Comedy Central show is totally awesome and worth owning to watch over and over and show to everyone you know.

Hawaii Five-0, The Fourth Season
Decent special features make this pricey set ($65! Are you kidding me?!) a decent if completely frivolous buy, even if the show itself isn’t particularly high on re-watch value. This CBS reboot is totally silly but the great Chi McBride joins the cast in season four and there’s one special feature on the DVD wherein all the former Lost people on the show get together and talk about that time they were on a show with lots of re-watch value.

South Park, The Seventeenth Season
Nearly 20 seasons in, this polarizing animated groundbreaker is still going strong with ideas that are as smart as the jokes are juvenile. The re-watch value on South Park is generally pretty high, making the DVDs worth it even if they are pretty light on special features but endlessly interesting co-creators Trey Parker and Matt Stone do mini-commentaries on every single episode here which is the pretty much the best special feature you could ask for.

Awkward, The Third Season
The third season of MTV’s charming coming-of-age dramedy comes to DVD with plenty of special features and a pretty reasonable price point for 20 episodes ($27). The character-driven storytelling and comic value of Awkward make it thoroughly re-watchable so even if the many special features are fairly shallow (the best of the lot: Tegan and Sara on the show’s music), the DVD is totally worth having.

Postman Pat, The Movie
British mail carrier Pat was a staple of my childhood so it’s strange to see him in this hyper-modern adaptation (he’s singing on American Idol?!) but the movie is cute and the star-studded voice cast really solid (Jim Broadbent, Ron Weasley…er…Rupert Grint, David Tennant and awesome Episodes star Stephen Mangan).

Ivory Tower
This documentary makes an excellent point about the true value of higher education in the US. Andrew Rossi’s work here is thoughtful, certainly, but the film’s actual value is questionable as it pokes a lot of holes and offers few solutions.

Teenage Mutant Ninja Turtles: The Beginning, The First Season
The Turtles are among the weirdest pop culture ideas ever. I mean, really, mutant turtles are a weird enough concept but ninjas AND teenagers?! Oh, and they’re named after famous artists, because obviously. But it works specifically Because it’s weird. The live-action Turtles movies from the 90s were some of my favourite movies as a kid (remember when they went to Imperial Japan?) but there’s a dull un-ironic gloss over the latest interpretations. This pristine animated origin series reflects that.

White Christmas, Diamond Anniversary Edition
One of the greatest holiday films ever made, White Christmas is sweet and stylish with great music but, mostly, it’s fantastically funny. A commentary by Rosemary Clooney plus a few other extras don’t make or break this special edition DVD (there are better features on the Blu-ray), the meat here is the movie itself, in top technical form, starring my beloved Danny Kaye in all his goofy dreamboat glory.

Penny Dreadful, The First Season
Showtime doesn’t have a lot of genre on their roster but they didn’t go halfway with this new literary horror drama. The strange mishmash cast (Eva Green, Josh Hartnett, Timothy Dalton and the guy from Spiderman: Turn off the Dark) works oddly well together, my love of Rory Kinnear knows no bounds, and the highest-of-high concept is pretty fun. It helps that this is a rare Showtime DVD that actually has special features at all, let alone a host of interesting ones including an investigation into the show’s literary roots.

Kingpin
This broad bowling comedy from the Farrelly Brothers is really not my thing; despite the presence of the genius Woody Harrelson, it’s just too ridiculous. The DVD has two versions of the film (why do we need to see the extended version of this?), a commentary from the directors, and just one featurette but, for just $15, the film’s many cult fans will be glad to finally just be able to get it on DVD at all.

CrazySexyCool, The TLC Story
Ha! The best thing about this DVD is the archive footage in the special features because it shows the real TLC in all their compelling glory. The film itself, on the other hand, is almost surreal in its existence. It’s a biopic about TLC made by VH1- that’s all you need to know.