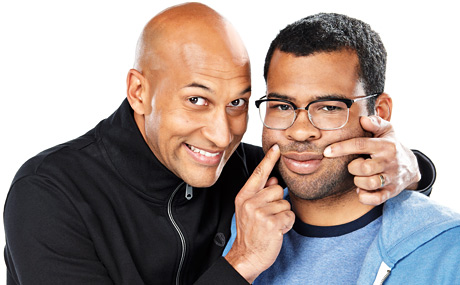 Key & Peele on Comedy Central is a best-of-all-worlds take on your standard sketch show. It’s like SNL with higher production standards and no boring musical guest, or MADtv if every sketch featured your favourite cast members and only your favourite cast members (because Key and Peele were obviously your favourite MADtv cast members, right?). There’s a perfect mix of impressions with original characters, recurring sketches with new ideas, topical, social and racial humour balanced with simple silliness, and both performers are so wildly versatile that they’re rarely repetitive and neither stands out as the lesser talent.

Sure, some of their ideas are just plain stupid (that farts-for-names sketch was something special) but there are a lot more hits in the Key and Peele canon than there are misses. I’m particularly fond of their recurring female alter egos (especially Peele’s delightfully horrific Meegan) and severely mismatched gay couple LaShawn and Samuel (“Your name is Allister one day, you do something good, your name could be Popeye!”).

Over the course of the first two seasons (out this week on DVD and Blu-Ray), you start to see the show bend towards audience expectation a bit. The pilot episode and much of the first season was pure gold whereas, by the end of season two, I was already tired of the over-used Luther sketch (the anger translator is the show’s most famous creation and thus gets a lot more play than any other recurring conceit). The later stuff is still funny, just slightly less consistent in its simple effectiveness. My favourite example of an early sketch that played on social realities without needing any sort of gimmick was just two guys trying to look manly by tentatively lying about how they speak to their wives (“and I said biiiitch…”; “did you really say ‘bitch’, though?”). Season two, conversely, ends with Jordan Peele balancing a seamstress on his head- still funny, just trying a lot harder.

As the series progresses you also see a change in how the clips are introduced. One of my favourite elements of season one is how the segments in front of the studio audience take on a standup kind of vibe, interrupted by sketches that may or may not be relevant to what was just being discussed. In seasons two and three, the studio segments serve mostly to introduce the next clip and are rarely as funny as standalone morsels as they used to be. But the reason they’re still effective is the immense likeability of the stars (I’m especially fond of Keegan, his dramatically physical laughter, tales of badly trained dogs, and use of “selfish” as a very harsh criticism). The profitable working relationship and comic compatibility of Key and Peele comes through in the sketches but the studio segments are where you get to see them riff, play around, and generally show off the friendship that serves as the strong base of the show. Good friends are always great fun to watch (think Amy & Tina, Mindy & BJ, even Adam & Blake) and it’s that relationship that makes Key & Peele a particular obsession of mine… though I could watch Meegan’s pathetic boyfriend follow her around the whole world and never get tired of his pleas for her to put on her jacket.