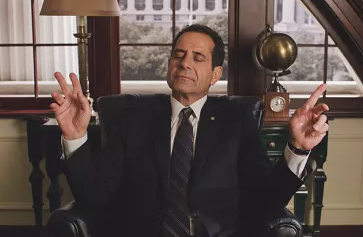 On Monday CBS announced the cancellation of two shows after just one season each. Both BrainDead and American Gothic were summer series- a seemingly cushy spot for a network drama where cable-like 13-episode seasons, less competition and lower ratings expectations often result in good-faith renewals that give critical darlings time to find their feet. A low-pressure April-June slot for its first season helped Hannibal stay on NBC when oddball auteur-driven high art was not exactly their brand. FOX used the summer season to kick off The OC so it was all the buzz when school was back in session. CBS gave Under the Dome a shocking three seasons. That show was terrible but it was ambitious and weird which are not qualities the networks are usually willing to gamble on with a high-stakes 22-episode plan for the regular season. BrainDead was also ambitious and weird but it wasn’t so lucky.

Michelle & Robert King’s Good Wife followup doubled down on their hit’s quirky charm and dispensed with the self-serious soapiness, replacing it with brutally accurate commentary on the joke that is DC politics. When BrainDead was being written, Trump was just getting started and the creators couldn’t possibly know that what was to come for the world they were skewering would be far crazier than their “alien bugs infect politicians and force half of their brain out their ear to intensify partisanship” premise. The Trump stuff is a sideshow in itself, we don’t need a satire to show us how crazy it is. What’s great about BrainDead is that it illuminates the toxic landscape that gave rise to the Trump campaign, the extreme polarization of ideology and culture of opposition that caused government shut-downs, a historic lack of productivity in congress and an electorate so disaffected that, well, you know the rest. BrainDead came a little too early to make fun of where we are now and is better for it, instead telling the more important cautionary tale of how we got here.

Our hero is Laurel Healy (played by Mary Elizabeth Winstead whose frustrating trademark monotone finally finds the wry dialogue it’s been searching for), a documentary filmmaker from a prominent DC family who gets sucked back in to work for her Senator brother Luke (Danny Pino, perfectly balancing heroic idealism and privileged smarminess). As Luke fights the good fight against infected Republican Senator Red Wheatus (Tony Shalhoub in the unleashed performance of the year) with no help from also-infected Democrat Ella Pollack (Jan Maxwell, all bluster and unreasonable fury), Laurel falls for Red’s chief of staff Gareth (Aaron Tveit, ‘nough said). Gareth’s reasonable, principled goodness and the show’s egalitarian distribution of bug-induced craziness gives BrainDead its non-partisan credibility- stubborn, vindictive Democrats are no better than their Republican counterparts and we need to stop forgetting that. Laurel also meets Johnny Ray Gill and Nikki M James (who are greatly amusing but fairly underdeveloped as conveniently helpful do-gooders) and together they uncover the bug conspiracy. Again, bugs come from another planet to use humanity’s pre-existing flaws to take us down from the inside, in every sense of the word, and they’re starting with DC because people can operate with only half a brain there with no one noticing.

If it sounds silly, that’s because it is. BrainDead– with its unapologetic genre mixing, wacky adventures and weekly musical recaps courtesy of singer/songwriter Jonathan Coulton- is relentlessly, knowingly silly. And therein lies its power. I’m more than tired of the hyper-serious “important dramas” of the modern TV age. I strongly believe that to entertain and to enlighten are not mutually exclusive goals and with BrainDead the Kings have found that perfect balance. It was the most fun show of the summer while also being one of the smartest, most incisive, most relevant shows of the year.

Does BrainDead‘s cancellation reveal a criminal lack of taste on CBS’s part? Absolutely. But it’s a forgivable cancellation in the big picture of bizarre network decisions. Great cancelled-too-soon shows like Selfie, Pan Am, Looking or the ultimate network victim Firefly all share a common sense of what could have been; they were just getting started and had lots of places to go. BrainDead wasn’t like that. Season one was a self-contained story with a solved mystery and resolved personal arcs. It wasn’t technically an anthology show but the vague plans the creators have talked about all describe a second BrainDead season as something very different from the first. The plan was to send the bugs to Wall Street where season one’s epilogue sent Luke Healy. Forcing any of the other characters into that new storyline doesn’t sound to me like a promising idea but the prospect of a Gareth-less, Red-less, everyone else-less BrainDead is just as unappealing.

The only solution, I guess, is to keep it as it is. 13 episodes doesn’t feel like enough for a show I loved this much and it seems strange that CBS couldn’t let it live a little longer considering the low-stakes summer timeslot and Good Wife goodwill the showrunners built up over 7 seasons as the network’s only prestige hit; I have to believe the Kings would have figured it out and BrainDead season two would have been pretty great, if not quite as great as season one. But maybe it’s for the best. As is, BrainDead is a fantastic self-contained mini-series perfect for the time that it existed. Maybe that’s enough.