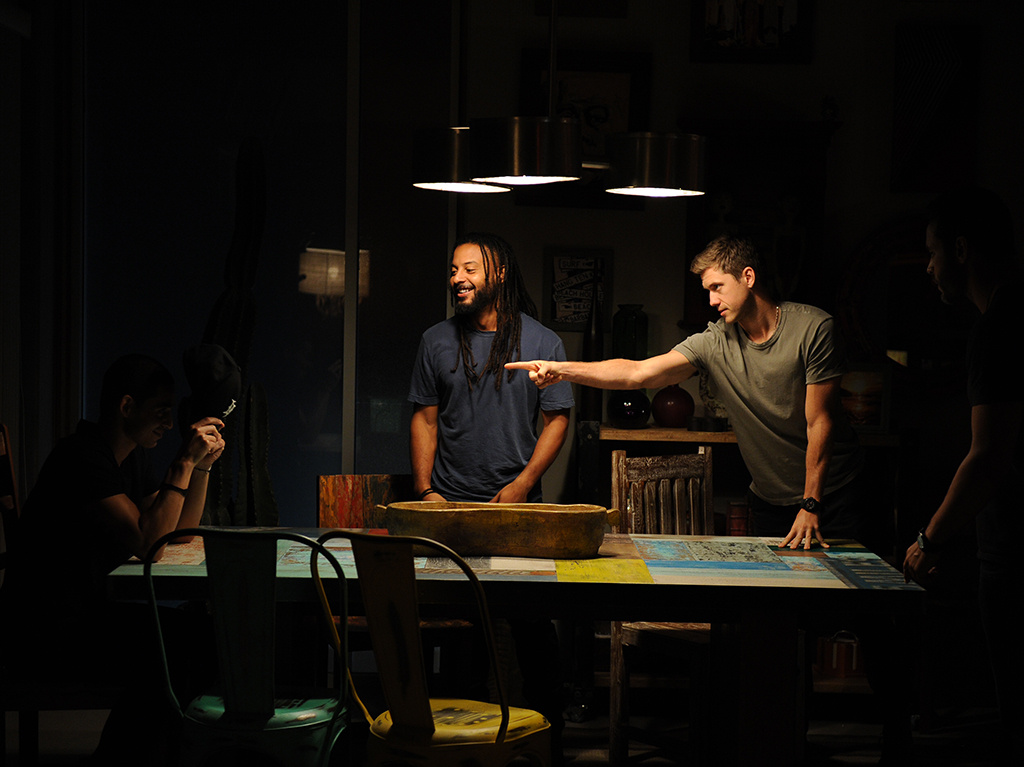 The title to this piece is a misnomer; Graceland’s sophomore season is more than halfway over. It’s hard to believe, because the season has flown by. So many things are happening, and in order to wrap everything up, the remaining five episodes will probably be intense and full of action. Not that the current episodes aren’t full of action – sometimes it feels like almost too much happens in an episode. While Season 1’s focus was mostly on Briggs and Mike (Daniel Sunjata and Aaron Tveit) with the rest of the cast as supporting players, Season 2 feels much more like an ensemble drama, which has its pluses and minuses.

The bad part of giving more characters their own storylines is there sometimes the show struggles to devote enough time to fully flesh them out. This is really noticeable in the cases of Briggs and Mike. Briggs keeps disappearing for the majority of episodes and reemerge to offer help to the team. His misdeeds from Season 1 and their consequences are only sporadically mentioned so when they seem almost like an afterthought. As seen in ‘The Ends’, they will be addressed and probably have a substantial impact on the rest of the season, but some more consistency would be nice.

Mike’s character development would also profit from more screen time. In Season 1, we watched as his naivety eroded the longer he did undercover work, but he was still one of the more innocent and compassionate members of the house. In Season 2, Mike is in charge of the team, and has to make some difficult calls. His most controversial decision: should he shut down a human trafficking ring to immediately help the women entrapped, or should he keep the operation open so he can link it to a large cartel and take everything down. It’s a decision that pits his ambition against his compassion, and it forces him to reevaluate his morals and boundaries.

Mike chooses to go after the cartel, reasoning that if the bigger organization is shut down, they can prevent further crime, whereas closing down the smaller operation would perpetuate a vicious cycle. In the face of Paige’s outright empathy (more on that later), his decision seems a little cold. But once he makes his decision, he commits to it. Mike’s detachment this season seems to be another choice Mike made and stuck to- he needs to be a leader and that means making difficult decisions, so he has separated himself a bit from the group.  Sunjata and Tveit are more than capable actors, so they are able to convey inner turmoil their character experience, but these character evolutions would be smoother if they were given more scenes more consistently dealing with these specific arcs. (Mike should also get more scenes with Charlie. She’s a great sounding board for him, and their friendship was one of the best parts of Season 1).

While Mike and Briggs have less scenes than last year, it means there is time for Paige, Johnny and Jakes to get more screen time. Jakes still suffers from his storyline being dropped, which is a shame, because it was great seeing another side to the usually stoic housemate. Charlie’s guilt over her ‘responsibility’ in some of the events from Season 1 is something that could use some expansion instead of only being picked up when Charlie has nothing else to do.

Paige surprised me this season by being such a big part of the show’s heart. After Season 1, I couldn’t tell you who Paige was. She was heavily defined by Mike’s needs: she was his sidekick, his confidant, and eventually his love interest. Because of that, it was hard to get a sense of who she was as a character. Sure she was brave and intelligent, but those are prerequisites to live in an undercover government house. This season however, Serinda Swan has really been given a chance to shine and demonstrate Paige’s determination and stubbornness as she fights to release the girls in the human
trafficking ring. She’s tough but kind, traumatized, but not broken.

Johnny has also been able to branch out this season. In season 1, he was often relegated to comic relief. In Season 2, he is given an in-depth undercover mission and develops feelings for a member of the Solano family, the giant criminal organization they’re trying to take down. Falling for the daughter of a crime lord during an investigation seems a little cliché. It’s also slightly redundant to explore since Johnny had to fake affection with the same crime lord’s son, Carlito as part of his investigation. The contrast must have been done on purpose: faking attraction to one sibling while genuinely feeling it for the other, but both storylines are rushed, so whatever this storyline is trying to communicate gets lost along the way. Johnny’s situation is precarious and complicated enough without an extra entanglement, and it is a little detrimental to Johnny’s character. Going undercover is part of his job and the fact that he is unable to do so without forming an attachment to one of his targets makes him look impudent and reckless, especially since it’s not the first time Johnny’s involvement with someone while undercover has gotten him in trouble.

This isn’t to say Johnny has to be a robot and can’t feel anything, but it’s one thing to feel protective over someone if he witnesses their brother openly abuse them, but it’s another to develop feelings that interfere with his investigation. It seems almost heartless to say he should be in better control of his emotions, but it’s part of the job he chose to do. It’s also been pointed out several times that the female agents constantly have to manipulate emotions in their work and are able to do so without it clouding their judgment, and that everyone on the team has received training for this kind of situation. Manny Montana does a great job of showing Johnny’s dilemma and makes it easy to get wrapped up in his struggle. But if you take a step back, the existence of this particular dilemma seems like an unnecessary disservice to Johnny’s professionalism and his growth as a character.

The framing of the season works really well as far as having an engaging plot week-to-week while working towards a clear end. The show excels in making sure each character has a part to play in bringing down the Solano cartel, leaving no one on the sidelines. It just slightly struggles to consistently address the characters’ personal arcs. The team is less united this time around, and perhaps therein lies the biggest problem. Everyone is trying to isolate themselves to be alone with their inner demons, but in shutting out the other characters, they’re shutting out the audience to an extent. (Paige and Johnny are the exceptions because at least one other person knows about their drama, but this is less by choice and more because of circumstances outside of their control). The cast does a good job of exhibiting a lot of internal conflict without a lot of time and keeping their characters believable and well-rounded, but if they were less cut off from each other and had more time more consistently, they could do even more. It isn’t bad per se, but it’s not as strong as it was, and could be better. To be fair, I’m not sure if my wanting more character scenes is because the show isn’t delivering on them or just me being greedy. Perhaps a bit of both. Either way, as the plot begins to come together, hopefully the team can come together again too.