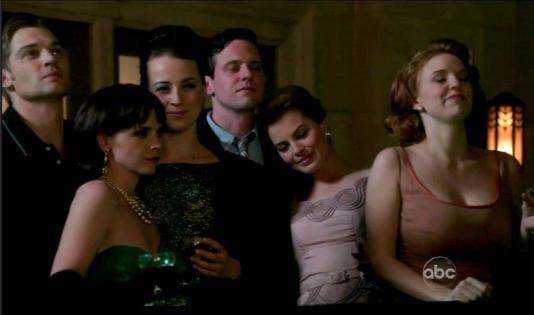 Season Wrap Up: Pan Am

This was an amazing TV season for new shows, but I would trade all of them in (except New Girl, we have to keep New Girl) to save my favourite, Pan Am. I think the concept seemed odd to a lot of people, so they just didn’t tune in from the get-go and critics hardly ever watch past the pilot- there wasn’t much chance Pan Am, with its high production costs and lofty aspirations, would catch on enough to win life after an initial order from ABC. But it should, it absolutely should, anyone and everyone who actually bothered to watch Pan Am knows it’s a show worth saving, and the season finale,  though it depressingly could serve as a suitable series finale, was yet another testament to why.

Colette wrapped up her fairytale courtship when her Prince uncovered that her parents weren’t in the French Resistance after all, they were Jewish and died in the Dachau concentration camp. While it was an ending to her short-lived romance with Omar, the story pulled Colette back to her best arc to date- the exploration of her WWII past first beautifully uncovered in the superb Berlin episode early in the series. The discovery also included the existence of a younger brother she never knew and planted the idea of her search for him- a fascinating season two story, or Colette’s offscreen future, here’s hoping for the former.

Going with her to track down her brother is Dean, newly reconciled with Colette (though they still have damage to undo) and suspended for 6 months as a wrap up to the thrilling Haiti episode that saw the captain breaking all sorts of rules on behalf of his better judgement. Though Dean’s battle against the Pan Am disciplinary board wasn’t the most interesting story of the episode, it paid excellent tribute to the history of the series.

One of the great arcs that’s developed over the course of the short first season is the relationship between Dean and Ted- highlighted again as they drank and shared their woes in the cabin of an out-of-service plane. Their resentment and rivalry fueled the first few episodes and watching them come to understand each other has been one of the great joys of the series- a beautifully executed throughline. Ted’s remark that he can’t imagine six months “sitting in the right chair without [Dean] in the left” was the perfect capper to their burgeoning bromance.

The other most thoughtfully executed relationship arc this season was between Ted and Laura. The show’s central “will they or won’t they”, both characters had to experience major arcs of their own before the chemistry planted in the pilot could be acted upon. Laura came into her own, developing an interest in photography, coming out of her sister’s shadow (and losing her virginity to Gaius Charles!) while Ted’s relationship with Amanda made him quite simply grow up and figure out what matters. The arc about Amanda’s sexuality was incredibly intriguing and what it meant for Ted’s character made it all the more great. His finale happiness with Laura, however, wasn’t just punctuated by his father’s disapproval, it was pierced by Amanda’s announcement that she’s pregnant. If this is the series finale, it’s incredibly melancholy; if this is the season finale, that’s rich storytelling material…

Maggie, the least interesting principal character, got very little rich material throughout the first season- with a fabulous but sadly short detour into excellence when she got involved with a conservative politician. Her disillusionment after the death of President Kennedy in the penultimate episode was interesting territory, I wish they’d mined it more instead of making it the shadow motivation in her awkward smuggling storyline.

As usual, the standout story of the episode went to Kate, the true star of the series (played brilliantly by the vastly underrated Kelli Garner). When an injured Richard showed up at her door claiming a double agent was in their ranks, Kate had to locate her loyalty between her handler and the MI6 agent who had helped her through the shooting in the dramatic “Kiss, Kiss, Bang, Bang”. The plot had emotional resonance for the show’s deepest character, great moments of self-awareness and enough twists to rival a proper espionage show. Offered a job as a real agent, the episode left Kate pondering leaving Pan Am, and while that would be the Coolest Spinoff Ever, I’m hoping she doesn’t leave, cause that means Pan Am will be taking off again for season two.

The episode ended with Dean and Ted joining the girls at Ted’s apartment to celebrate New Years Eve, a great melancholy sweeping over the scene- Laura, happy in Ted’s arms, not yet knowing about Amanda’s pregnancy; Colette reuniting with Dean with the promise of finding her family; Maggie and Kate unsure of their next move in a country without a leader; Pan Am either finished or just getting started.

As Old Lang Syne rang in 1964, the group huddled together, Kate closing her eyes as if she were wishing on all our behalves that she might be back someday.