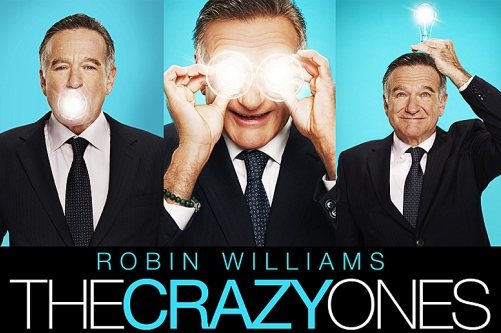 Pilot Watch: The Crazy Ones

There are TV actors, and there are movie actors. TV actors were second class talents who dreamed of making it through the glass ceiling into films. Many tried, most failed, and the few who made it off the small screen never even thought to go back. For decades this has been the gospel truth in Hollywood, until the past decade and the rise of cable TV caused a dramatic shift in the entertainment landscape. TV shows were no longer viewed as disposable and inauthentic. Show like The Wire, Mad Men, Breaking Bad, and Game of Thrones have proven that television could be as good, and in some ways even better, than movies.  As TV shows began to receive more critical acclaim, higher profile actors began to find themselves drawn back to the small screen. In stark contrast to the days when an Academy Award winning actor returning to TV would be considered a has-been, Dustin Hoffman was the lead in an HBO series, Al Pacino has starred in several miniseries to rave reviews, and now legendary comedian Robin Williams has returned to network television as the star of The Crazy Ones.

The show is a single camera sitcom, a rarity for CBS after dominating ratings with their multi-camera productions. The Crazy Ones is centered around the advertising agency of Roberts & Roberts, one of the leaders in their field. Robin Williams is Simon Roberts, the ageing head of the firm, while his daughter Sydney, played by Sarah Michelle Geller, represents the younger generation that is slowly taking over the advertising world. The third member of the cast is James Wolk, aka Mad Men’s Bob Benson, who has quickly established a reputation on low rated but critically praised shows, and appears here as the rapscallion Zach, the foil to Sydney. The Crazy Ones is created and executive produced by David E. Kelly, the mastermind behind Ally McBeal, The Practice, and Boston Legal, all centered around work places filled with quirky characters.

The pilot episode begins with disaster on the horizon for Roberts & Roberts, as rumours abound that MacDonald’s, their largest client, is preparing to fire the agency. Sydney and the charming Zach are scrambling to perfect a new pitch in an effort to avoid their fate. The show takes it’s time introducing the audience to Williams as Simon Roberts, and when the character finally does appear, he is holed up in his office playing with a life-sized Rock’em Sock’em Robot. Despite an attitude that comes off as childish and scattershot (i.e. Robin Williams), Simon is able to stay their termination with a heartfelt pitch, and gets the agency 24 hours to recruit a big-time star to sing the classic “You deserve a break” jingle.

From the get go, it’s perfectly clear that The Crazy Ones is Robin Williams’ show, and everyone else orbits around him. He brings his signature madcap energy, thousands of voices, and improvisational skills into his first scene. The show was obviously built with these talents in mind, and the pitch meetings provide a great opportunity for Williams to show off, and turn his performance on a dime from funny to serious. Williams and Geller actually have genuine warmth in their TV relationship, and it feels like a real dynamic with history between them. The best pairing, however, is when Williams’ Simon teams up with James Wolk’s Zach. They have incredible chemistry together, riffing off one another like an old time comedy duo, and the fact that Wolk is able to keep up with Robin Williams is a real testament to his hereto untapped comedic talents.

Of any new show this Fall, The Crazy Ones has some of the best talent in front of and behind the camera, but all this talent and pedigree has resulted in an odd side effect. The show can feel very cold and manufactured at times, like the corporate attitudes espoused by the agency’s clients have extended to the show itself, and is only compounded by the fact that the show itself is titled after a commercial for Apple Computers.  Even with Robin Williams manic energy feels oddly planned and contained. It is as if certain pages of the script were left blank, with a simple annotation reading: “Robin Williams acts like Robin Williams”. The few moments of genuine excitement, essentials the Williams/Wolk scenes, highlights how safe the rest of the show feels. It should also be noted that, take away the credits, and the pilot is around 18 minutes long, while 21-22 is the normal length of a sitcom. A lot is packed into those 18 minutes, but the episode still feels abbreviated.

The Crazy Ones is good pilot from some of the highest calibre talents in network television. The success of the show will depend greatly on the audience’s appreciation for Robin Williams and his signature style of comedy, as it is literally what defines the series. The show is funny, and the cast is excellent, despite an oddly sterile feeling at times. The moments that managed to break through this feeling prove that the show has great potential; it simply needs to grow comfortable with just a little bit of controlled chaos.

Pilot Grade: B (but if you don’t like Robin Williams you’ll probably hate it)