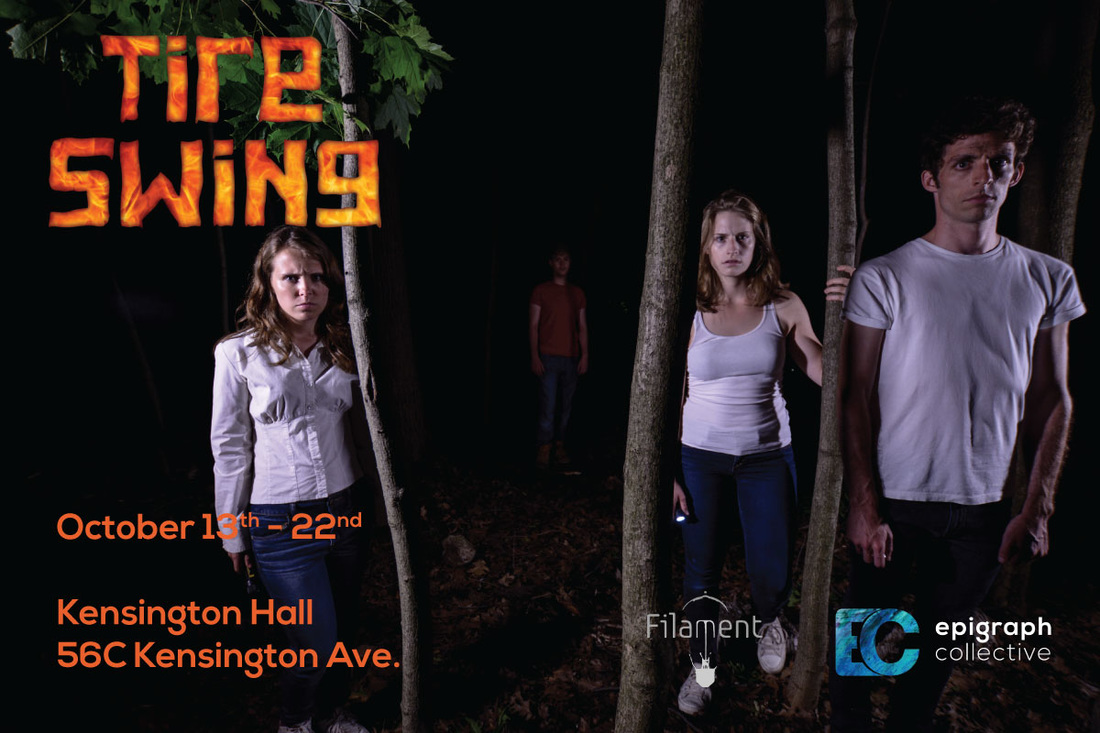 Unless you are blessed from an early age with extreme self-awareness, patience, and unshakeable self-confidence, then your adolescence was (or is going to be) probably very fraught. It’s a period of time that upends the life you’ve lived up to that point: everything becomes more complicated, less secure, and a little more threatening. You simultaneously experience both physical and psychological change, and become acquainted with the reality that all the people who surround you (including your loved ones) are just as vulnerable and unsure as you. It’s not all bad, of course: it’s also a time that features euphoric and unanticipated self-discoveries.

Imagine, then, that this journey is preceded by a strange and traumatizing event that informs your entire adolescent adventure. That’s what director Sadie Epstein-Fine and writer Curtis te Brinke explore with some success in Filament Incubator and Epigraph Collective’s production of Tire Swing, a story about three friends recounting the night that the fourth member of their quartet vanished one evening in the woods when they were all ten years old. A night-time hangout in a forest adjoining the Southern Ontario town where they all live turns eerie when they encounter a strange, shadowy figure, which causes them split up in a panic. In the ensuing confusion, one of their number, Kevin (Patrick Fowler), goes missing. The event launches the remaining three friends into eight years of questioning and unresolved trauma. They also have to contend with a permanent cloud of suspicion that hangs over their heads as they are assumed by most of the town to have been responsible for their friend’s disappearance and probable death.

Production designer Jason Thomson has dressed the basement space in Kensington Market as if to suggest a space mid-transition between the top floor of a suburban house and a forest, as if it were taken from the first few pages of Where the Wild Things Are. Two beds frame the back corners of the room, and pillars in the centre are laced with vines and plants. All four actors inhabit this tonal middle ground adeptly, and Epstein-Fine has blocked out a physical and immersive show that frequently has the actors spread out around the entire room. As an audience member you’re rarely looking in the same direction for longer than a few seconds before you look over at someone else, either to observe their scene, or simply take in their reaction to what’s going on. It’s fun and engaging and means there isn’t necessarily a good or bad seat in the house: given the layout of the space, there will be a couple of moments that won’t be totally visible to the audience no matter where you’re seated, but there’s always somewhere to look.

The performers are all strong, though their characterizations seem relatively unchanging despite going from ages ten to eighteen in the story. Perhaps this is a deliberate choice, emphasizing that this is a story being told in retrospect, coloured by the self-perceptions and beliefs of their older counter-parts. Nikki Haggart is steely and on-guard as Kevin’s closed-off sister; Jocelyn Adema is thoughtful and open as the most grounded member of the group, who had a crush on Kevin when they were younger; Fowler handles the dual roles of young Kevin and older, closeted jock David with subtle ease, and Francois Macdonald as the de facto protagonist is both wry and affecting as he negotiates his character’s gradual coming out in tandem with a growing need to understand what happened to Kevin.

Images are occasionally and projected onto a screen on the back wall (a night sky; the silhouettes of mysterious figures or the titular swing seen in the woods; flames). It’s a simple and effective means of manifesting the physical and spiritual terrain of the story, though sometimes it proves a distraction when the projector is blocked by the shadows of performers, or indeed by audience members, as a small section of the screen is for the whole show due to the seating layout.

The play has an appealing affection for his characters, and the first half of te Brinke’s script is particularly effective in its focus on their personal growth as being forever tied to the experience they quietly try to understand. But the ethereal intrigue of the first forty-five minutes begins to fade somewhat as the play stretches on to ninety minutes. While the lovely turns of phrase continue and we remain intrigued by the characters, the delicate heart of the story gets a bit mangled as repetitive scenes featuring the friends arguing over what happened the night Kevin disappeared and what it all means begin to pile up. Of course a play that covers eight years is going to need time to tell its story, but the journeys experienced by each character nevertheless feel padded – if we’re thinking in terms of literary fiction, the story exists somewhere between a short story and a bildungsroman, and I think its strength lies more with the former. Still, the ambition of the play with regards to span of time and fluidity of location is exciting; te Brinke has crafted a poetic and frequently appealing work whose central mystery and enigmatic symbolism is used to frame a story of growing up and saying a magnificent, ambivalent goodbye to your past. With its small town setting, moments of strange horror, and focus on high school romance, it has an occasional Twin Peaks-y vibe (including the return of the central victim in the form of a new person), an undertow of mystery mixed with dark comedy emphasized by Epstein-Fine’s dynamic direction. This makes its tendency to over-articulate itself in the form of lengthy monologues from the characters (particularly towards the end) feel all the more unnecessary. There’s a very evocative fifty/sixty minute short play residing within this piece, and while this version is still intriguing and emotionally compelling, that version I think will be one to really look out for.