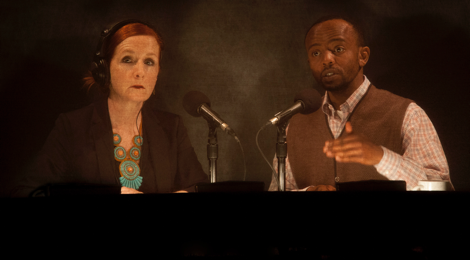 On Stage in TO: Let’s Talk

Scarberia (Young People’s Theatre)
As the lights dimmed on Evan Placey’s coast-jumping, Shakespeare-referencing, mind-bending one-act about two sets of teenage boys tied together by a young woman who goes missing in Scarborough, Ontario and shows up in Scarborough, England, the early-high school audience began muttering that it was “too complicated” and “confusing”. It is really complicated, and a little bit confusing (a scene near the end that’s a tour de force for the dual-role’d Mishka Thébaud and Shelly Antony demands pretty epic concentration from the audience) and it’s a real problem if the target audience isn’t getting it, but I found Scarberia refreshingly ambitious. The story at the play’s heart is a modern Romeo & Juliet situation between Antony’s gangbanger Craven and Alejandra Simmons’ Marishna, the sister of a rival gang member. We’re told this story in the past tense by Marishna herself, always alone, all her lines a seeming nod to Shakespeare’s verse with modern spoken word poetry. Onto that, Placey layers parallel examinations of dissipating best friendship (Canadians Craven & Simian and Brits Craig & Simon) and the coming of age stories that coincide, all of it wrapped in a larger thematic package that asks “how much does where you come from determine where you end up?”. It’s a demanding piece, and maybe it’s a little confusing, but I think YPT audiences can handle something demanding so I’m incredibly happy to see the company deliver just that.

Bill (Filament Incubator)
This solo show written by Daniel Bagg feels like two shows, one of which feels like half of a much better show. The first 30 minutes or so is almost uninterrupted vitriol as the titular disgruntled plumber tells angry stories about his wife, her stupid hobbies, her stupider decisions, and the stupid friends he hates. I spent a significant amount of time during these 30 or so minutes wondering how he would murder everyone in the story because I was sure that was were Bill was going. The last bit of the show walks back the wife-hatred a bit and makes a moderately convincing argument that deep-down, Bill really does love Susan. This part only flies because the energetic Brendan O’Reilly plays it with such sincerity but I still walked away unconvinced that Susan would live to see the next leg of her didgeridoo tour. What I mean when I say that half of the show felt like half of a better show is that that first, very angry, part might actually work fairly well if separated from the conveniently pleasant ending and intercut with the same stories told in contrasting soliloquy by Susan. It could be a bleak comedy about perspective and toxic relationships as told by two unreliable narrators instead it’s just a forebodingly hateful comedy told by a toxic man whose perspective we’re supposed to accept as fact.

Refuge (Nightwood Theatre Company)
Playwright Mary Vingoe’s complex examination of the paranoia and compassion tied to the treatment of refugees in Canada today artfully frames its present-tense story with a past-tense CBC radio interview like the one that inspired the play. Mary Francis Moore perfectly captures that engaged-but-distant CBC tone as the unnamed interviewer trying amusingly to get her subjects to speak in a way that lets her cut her own voice out of the recording. The Canadian characters (Pamela Mala Sinha’s determined museum curator and Jason Weinberg’s realist human rights lawyer, a particularly moving performance) make it easy for her but the newcomers to Canada (represented by Raïs Muoi as a naïeve translator) don’t seem to understand why she would want to remove her own voice from the conversation. In a lot of ways, Refuge is about the voices that are not in the conversation. It’s main character (Ayinom, a young Eritrean army deserter seeking refuge in Canada) never appears on stage and his mother (Andrea Davis) has only a handful of scenes. It’s the Westerners who speak for the Eritreans here, their reactions to the drama take over the play just as they do in real life. Forget the struggle of the brave refugees crossing oceans for the right to freedom and life, aren’t we such wonderful people for taking them in? Are we making the right decision in trusting them not to hurt us? We barely notice as we hijack the narrative and make it our own. Refuge won’t let that crime go unnoticed.

The Best Plan for Living Happily (Birdtown & Swanville/Questionmark-Exclamation Theatre)
The way age compromises and complicates friendship has been a recurring theme throughout the 2016 Toronto theatre season thus far and it recurs here yet again. In her latest work, playwright/performer Julia Lederer spins a fascinating tale that touches on the darker side of counter-institutional philosophy and the selfishness of the search for self. Unfortunately, the intense focus on the unlikeable leading role (Violet, played by the playwright herself) and the overall structure of the piece (Lederer has many a long monologue about the terrible state of the world) make the play’s most interesting arguments seem almost accidental, as if Violet’s unhappy rants are meant to be believed rather than pitied. Try as the intriguingly sure-footed Michael Eisner and simply contented Rebecca Applebaum might, their potentially game-changing, illuminating perspectives make as much impact on the play as they seem to on Violet, meaning not enough.

Winter Play Project (Theatre By Committee)
Theatre by Committee’s new play development program led to two very different creations, one an intimate family drama with occasional moments of absurd direction, the other an absurdist farce with occasional moments of intimate drama. The first- Family Debts, written by Kelly Anderson and directed by Brian Postalian- was, in my opinion, far more of a success though, full disclosure, I have a hard time wrapping my head around why I should care about absurdity for absurdity’s sake, which is definitely what Christian Tribuzio’s Comme Ci, Comme Ça felt like (complete with actors who alternate roles at each performance, a popular device that works very occasionally but usually just ends up splitting rehearsal focus to create two middling performances instead of one good one). Brandon Gillespie had some great moments as Don in Comme Ci but most of the evening’s great performances came from the Family Debts cast (Owen Fawcett, Hannah Jack and Suzanne Crone) as they navigated Anderson’s sad, specific world of distant but unbreakable family bonds, slowly built trust and uneasy adolescent psychology.

Caught (Theatre Passe Muraille)
I really struggled with what to say about Jordi Mand’s new one-act in the TPM Backspace. Jakob Ehman and Sabryn Rock are great in the lead roles and I loved John Thompson’s stark set that is at once imposing, claustrophobic and functional. But the play doesn’t feel finished so I don’t really know how to talk about it as if it is. It felt like we were kicked out of the theatre at intermission and that, even with a hypothetical second act, Mand couldn’t possibly do justice to the half a dozen threads she pulled in the first. The play lacks focus, trying to say too many things and explore the fact that a good character is never just one thing but such ambition needs time and space to really delve. Instead, Caught catches our attention then completely leaves us hanging.