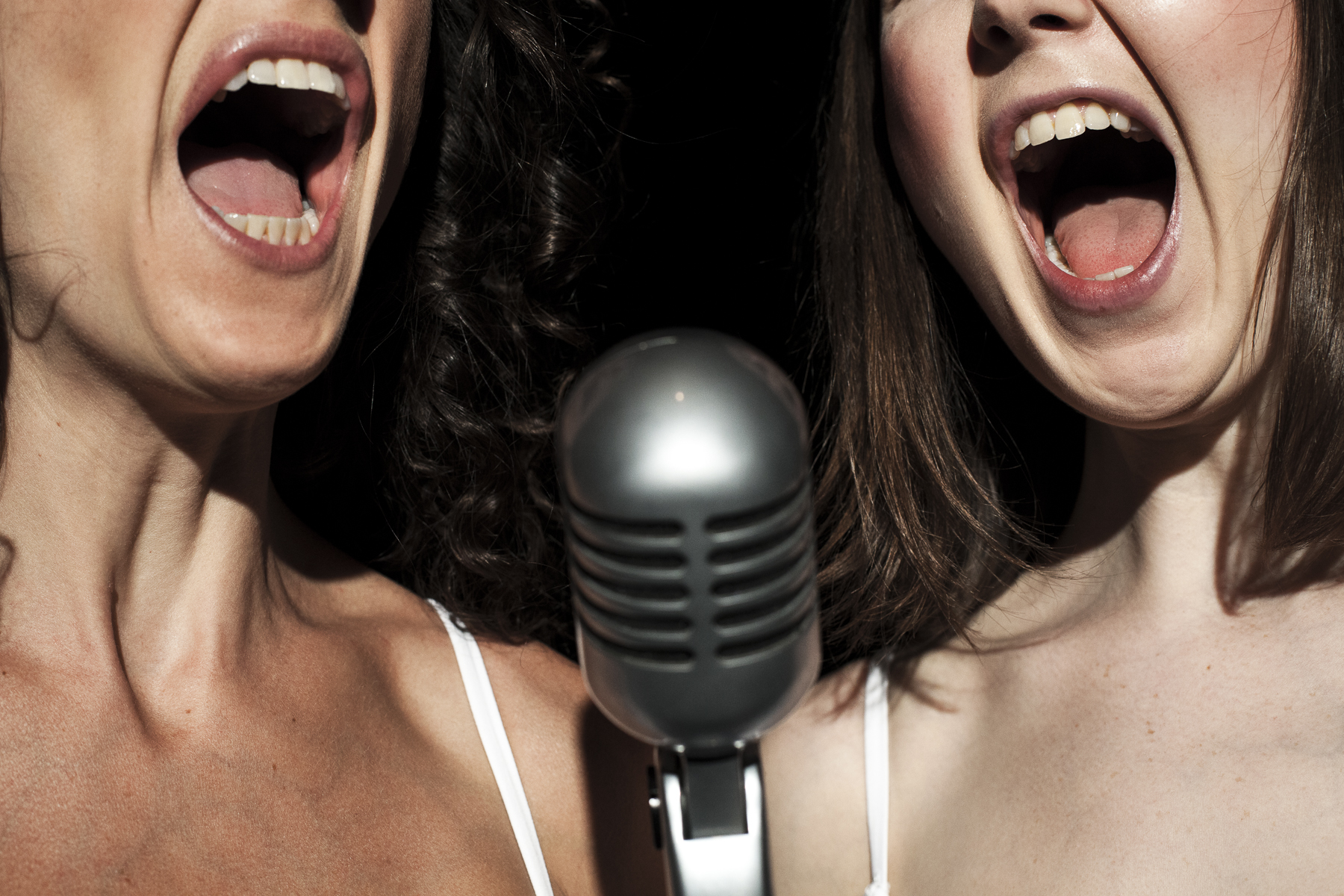 Nightwood Theatre defines itself as a feminist theatre company whose mandate includes providing an ‘essential home for the creation of extraordinary theatre by women.’ These two pieces, currently on stage at Buddies in Bad Times, certainly hit that mandate.

Quiver
Written and performed by Anna Chatterton, Quiver is a story about a mother and her teenage daughter Bea, and a man that comes between them. Meanwhile the youngest daughter, Maddie, gets left to fend for herself, practically and emotionally.

As we walk into the theatre, Chatterton is on the stage, in character, doing a combination of a soundcheck and a preshow. She stands in the centre of the stage, surrounded by audio equipment – a laptop, a soundboard, a looping machine, a microphone, and a small table of props. With red and yellow lights focused on her, she looks like a musician ready to perform for a club.

Chatterton then proceeds to tell the story of three women trying to find their place in the world, often at the expense of each other. In some ways this show is a staged reading combined with a solo audio performance. Chatterton’s vocal range and capacity is impressive, distinguishing well between the three main characters. She uses four or five simple props, which are effective at helping to set the scene and create the mood. The audio equipment allows her to create sound effects that pepper the audio backdrop of the story, while also allowing her to create various vocal effects – looping, echoes, different pitches – which help to augment the characterization and add to the emotional richness and humour.

At one point, Chatterton takes the mic and moves to the front of the stage, as if to create a more intimate feel than when she’s behind the mic. It worked, but it also feels as though this was springing from an impulse to push the show a bit further. It’s the only time she moves forward, and while it works for the particular moment in the story, on the other hand it seems a bit arbitrary. I wonder if the show might be in need of another element, something visual or something that might help fill the performance out.

Regardless, Chatterton’s performance is excellent; the only minor flaws were some line errors that she breezed through gracefully, never breaking character and grounding the centre of the action as she brings an intricate and weighty story to life.

Mouthpiece
Created and performed by Nora Sadava and Amy Nostbakken, the second half of this Nightwood double bill is a journey into the female psyche. Following the death of her mother, the show follows one woman for one day as she tries to find her voice, both literally and figuratively. Nostbakken and Sadava play two aspects of the same woman, at times in perfect unison, and other times in dissonance.

I can honestly say that this piece of theatre is one of the most exciting things that I have seen in years. The show tells the story not just in a creative and unique way but, more than this, every detail is thought out and has a purpose. There is no extraneous moment in the entire piece. The space itself is well-used, and the one set piece, a lone bathtub, serves as both a literal and metaphorical image: it functions as a bathtub, but also a casket, a womb, and a mouth.

This leaves Nostbakken and Sadava to fill up the rest of the stage, something they need no help doing. The performance incorporates monologue, dialogue, movement, dance, song, and spoken word poetry. Dressed only in white bathing suits, these women are entirely unselfconscious, in the moment and inside their skin with such presence and comfort and elasticity that they are nothing less than mesmerizing. Their comfort in their own bodies but also with each other’s is striking: during one scene the women take turns standing behind each other, the woman in front trying on clothes in front on a mirror and narrating her social anxiety about how to comport herself both physically and aesthetically, while the one behind her grabs her chest and her crotch as if it were her own. It’s as though the women are in fact inhabiting each other’s bodies as they play the role of one woman.

At the core is an emotionally authentic and raw story about someone who has just lost her mother, who has to organize a funeral, write a eulogy, and process her feelings about death and loss and what her mother even meant to her.

What I love most about this play is how it is about something political by way of investigating the very, very personal. The show depicts the internal anguish of a woman trying to figure out what her mother meant to her, to think of how her mother modelled how to be in the world, what she admires and what she doesn’t and how to even write a eulogy that isn’t about her internal conflict, but which honours her mother. Throughout that day we also see all the other kinds of considerations that go through many women’s minds: how do I look, what does it say about me as a woman if I do this or that, what does it mean if I order French fries, snarky reactions to catcalling and inappropriate comments and anticipation of how people will see her at the funeral.

The performance represents one woman but also many women, and the story resonated with me on a deep level not just as someone who has had to write a eulogy for a parent, but as a woman existing in this world. This show lays bare in an emotionally authentic, creative, often funny, self-reflective and guileless way what it’s like to be a woman in our society, something about which many still need to educate their imaginations.