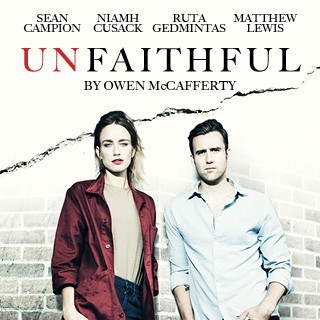 Typical off-West End, though you’d expect Soho Theatre to programme something more enticing (and I’m definitely enticed by Burning Doors). Writer Owen McCafferty and Director Adam Penford’s Unfaithful is of the barely-enough variety, the kind of play that chucks rough sex and swears around to raise the room temperature (in the dramatic sense, not in the literal sense—Found111 is practically a sauna). There’s politics- it mainly concerns a middle-aged woman losing her hold on life, being forgotten and struggling to reassert herself- but, ironically, that thread is often pushed to the side to make more room for younger people’s concerns. This is truly galling because Unfaithful’s young’uns are a deadening presence.

The plot invites comparison to Marber’s Closer: long-married couple Tom (Sean Campion) and Joan (Niamh Cusack) are in crisis. He’s had extra-marital sex and she’s angry—angry in an unusual way because the real reason Joan’s piqued is that Tom never bothered to talk to her about his desires before acting on them. Cut to the prologue of Tom’s affair, where young Tara (Ruta Gedmintas) approaches him and, by all appearances, seduces him into adultery. Shortly after, we see Tara and her boyfriend Peter (Matthew Lewis of Harry Potter fame). We learn she’s a checkout girl and a secondary-school-dropout; later we discover that he’s a sex worker, and he’s used (in the best scene of the play) by Joan for revenge sex. The plot’s a messy quandrangle that questions the strength of relationships in the modern world—so, yeah, like Closer.

There are two moderately fleshed-out subjects: middle-aged lack of agency and sex work. Of the latter, Unfaithful is overall, though straining to the point of injury, sex positive. McCafferty, a storied-career, multi-award-winning playwright, could have passed the matter glibly, but he gives it some go here. Peter works for a fairly legit agency, so there’s no question raised of illegal exploitation (the bugbear obstacle of legitimate sex work). No, the potential demonization of the practice is in Peter’s admittance that he’s desperate to make money; he says he couldn’t stand working in a call centre. On that cause, you can either read his call to be “a cold, hard capitalist” as ‘people often do jobs they don’t want to do’ or that ‘selling sex is necessarily a last resort’; I’ll give McCafferty the benefit of the doubt because the first option raises a heavy counterargument to anti-prostitution activists: in a well-regulated trade, how is selling sex different to selling other services? Thankfully, there’s clearer problematising of Peter’s profession in the clash (though I realise it need not always be a clash) between monogamy with Tara and breadwinning polyamory with many. But, like every good subject in Unfaithful, it’s underdeveloped, and Lewis and Gedmintas aren’t strong enough to carry their scenes together.

Tara should probably not be a character. Instead of leaving her seduction of Tom to the imagination, McCafferty puts in a whole, superfluous staging of it, replete with cringeworthy innuendos around Tom’s plumbing profession, and she’s mostly there to facilitate that scene. She may even seem the object of a power fantasy by McCafferty, seeing as you so can easily substitute him for the older male role. Her character raises problems of mobility and the value of education (and the play lets them sit there inchoate), but it’s her casting more than anything that disturbs. Tara is a dead-end till-worker at Tesco but played by an actor with supermodel looks—this is not me saying that beauty and naturalistic acting do not mix; more that it’s impossible to believe, in a society that awfully prizes female beauty over other values, that Tara could be worried she’ll be working in a min-wage job for eternity. Not even slightly believable, and that may be the point: to emphasise the subjective desire of a young woman from Tom’s perspective, but there isn’t much other subjectivity running through Penford’s production so she, again, strikes me as fuelling a male fantasy.

Despite the gen Y features, the show is Joan’s struggle. She’s fading and wants to talk of it; There’s a disconnect between conversation and action, which is interesting in that the thing she’s most offended by, or at least purports to be offended by, is the way infidelity is not talked over before being committed; a chat, while not solving the problem, would maybe lessen the impact. That’s a neat point, because at once that suggestion is a reflex of wishful-thinking (who would dull an affair by telling their partner about it beforehand?) but also a plea of sense. At most, talking about one’s desires is venial, since words are weaker than actions, yet there’s a breakdown of that assumption when *spoilers ahead* Tom reveals, if we believe him, that he never cheated on Joan, and she is just as offended as if he had. His words have just as much impact as his deeds, and that’s because there was deception and that deception caused her to cheat in retaliation. Even though their relationship is bow-wrapped by the play’s end, this battle of thinking vs. doing is a forceful one, especially in the context of a middle-aged couple whose societal expectation is to do less and talk more, whether politically or sexually *spoilers over*.

So Joan isn’t willing to kowtow. She seeks out Peter for a night of torrid and potentially cathartic lovemaking. She can’t do it though, and flips the denuding around to Lewis’ sex worker (this is where we learn of his turn from mental/economic despair to the current career). Notable in this scenario is what’s being donned by Joan as much as taken off. She’s playing the role of her bitterly earnest self but also that of a cheater and then of the abuser when she’s given free rein to cast insults at Peter as some exorcising foreplay. He, conversely, slips between his robot-sex-machine persona and a more personal one because he’s not sure what she wants as a client. It’s an acute question of how someone can regain their agency in spite of paying for it; does Joan feel powerful despite knowing Peter controls the boundaries and the roles of the scenario? Annoyingly, we’ll never get the nuance in that question because Lewis’ performance is so one-note compared to Walker’s brilliant turbulence.

Penford’s directing is okay. The traverse isn’t used to great effect, encouraging no confrontation of audience vs. audience (the c-words aren’t shocking enough for you to peek at the other side’s reaction). There is some symmetry where the actors form rows across the stage, inviting contrast, or suggesting that they are linked together in their uncertainty and infidelity- this latter point is furthered by the actors eventually remaining on and around stage when it’s not their scene- but that’s all. Otherwise, the direction merely invites words like ‘snappy’ as in every West End/off-West End production ever.

Unfaithful has decent conflicts. Words vs. actions and liberation vs. capitalism, though these are held back. Joan should be the main character, Tara is unnecessary, and the elder relationship eventually plays out in the dullest, most populist manner imaginable. Penford’s production is fine, though he should have tried to shake the text up and get more out of Gedmintas and Lewis, who are too stale to make their scenes heat up from a tepid starting point.