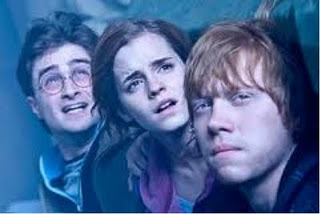 Goodbye and Thank You Harry

I have a long history with Harry Potter. I got the first book when I was 11. I read the last one my sophomore year of college. The books and movies have been there for me from pigtails to braces to paychecks, and everything in between. Last year, when Harry Potter and the Deathly Hallows Part 1 came out, I unpacked my Harry Potter baggage here.* And when the movie came out, I reviewed part 1 here.

I start with my history because Harry Potter and the Deathly Hallows Part 2 is a uniquely reflective film. Every image in it has been built to reflect the movies that came before it. In the requisite movie marathon that came with the release of the newest film, I recognized one major shift in having David Yates take over the director’s chair for the last four films. Yates, maybe due to the benefit of having most of the books out for all of his movies, seems uniquely aware of and concerned for cinematic continuity and for creating a universe within the movies that makes sense, thematically, logically and emotionally.

The films will never have the span of the book. They’ll never be able to fit in all the subplots, all the Ron Winning At Quidditch, all the Hermione Saves The House Elves, all the complicated bits of magical lore that explain possession of the Elder Wand. But where Yates excels is creating a cinematic universe that makes sense and to which Deathly Hallows Part 2 is a near perfect conclusion.

This movie is, across the board, fantastic. From that omnipresent John Williams score which is dabbled across the movie in just the perfect doses, to the near perfect representation of the blank metaphysical landscape of King’s Cross, it hits the exact right notes of drama necessary for this story. The action is as tight and immediate as it has ever been, with curses zipping through the air and creatures great and small storming the seemingly impenetrable strong hold for good of Hogwarts.

David Yates was handed fantastic source material. The final book was an almost perfect joy to take in, a fitting cap onto a series that for so many of us defined childhood, so it’s not exactly the movie that creates the grand themes or surprisingly elegant plotting. But Yates eye and commitment to the story help to bring out the themes and make visceral what was on the page.

There’s one scene in particular that exemplifies this idea. It comes right after Harry, Ron, and Hermione destroy the diadem and the cup. They’re rushing through the battleground to get to Voldemort and Nagini. In their minds, they’re going to finish the job they’ve triumphantly started. They’ve destroyed all but one horcrux. As they make up their minds to run out, the movie sets them up as triumphant heroes. Their simple battle is all but won.

And then these three 17 year old kids run into a crowded battlefield. To their every side is some other form of monster, is a barrage of death and destruction to a place that had once seemed the most secure place in the world. And Harry, Ron and Hermione (who loom large and adult throughout the movie) look so singularly small and insignificant in this world of fighting creatures and humans. No one stops and tries to get the famous Harry Potter. Their friends don’t see them running past. In that moment they are dwarfed visually by the enormity of this battle and it seems for one fleeting moment impossible for them to even get to the fight, let alone win it.

It’s a beautiful and terrifying moment, one of many provided by the film (there’s also some old school adventure stuff in there, and a nice dose of romance for those so inclined). And it illustrates the essential book themes of growing up and facing fate and death in only 12 seconds of screen time.

The characters who deserved it get their shot at glory too, of course. Neville is every bit the triumphant bad ass he is in the books, and a ridiculously good-looking Matthew Lewis manages to imbue him with every bit the noble loyalty Neville had on the page. Alan Rickman, as usual, is the perfect Snape. When McGonagall faces off against Snape in the Great Hall, Alan Rickman imbues Snape with so much determined sadness that it makes my heart break even more than what Harry eventually sees in the Penseive. In fact, the handling of the tragedy of Severus Snape is one of the movie’s high points, never failing to recognize Snape’s faults while also revealing the dark forces that shaped his destiny.

I’ve said it before and I’ll say it again: the forces behind Harry Potter got lucky when they cast their main trio. Rupert Grint has grown wonderfully into Ron, playing his occasional cowardice, jealousy and pettiness just as effectively as he plays his humor, loyalty, and heart. And Daniel Radcliffe has come into his own, pulling from sources of heroicness that it’s hard to imagine existed inside the 11 year old boy they cast back in 2001.

But this movie belongs, as did the movie before it, to Emma Watson’s Hermione Granger. No other member of the cast has grown as magnificently as has Watson. And it kind of shames me to say it, but her portrayal of Hermione has come to truly shape my own appreciation for the character. On the page, I always identified with Granger and was thusly hard on her. But as portrayed by Emma Watson with a steely brilliance and vulnerability, Hermione became a force to be reckoned with. I’ve spent a lot of this summer wondering at what kind of role models movies and TV are creating for young women. In a story called Harry Potter, you’d expect to find that the smartest, bravest, kindest character was Harry. With no disrespect to either Harry or Daniel Radcliffe,, Hermione as created by J.K. Rowling and beautifully perfected on screen by Emma Watson is the type of flawed and amazing female protagonist that one dreams of seeing. Watching her jump on a dragon, or allow her friend to go off to his death, or finally get her chance with Ron, the movie provided me with just what I needed to say goodbye to one of my favorite characters.

When I finished the final Harry Potter book, I found myself amazed at how completely it had enthralled me and yet left me so satisfied that I only kind of wanted more. This movie manages the nearly impossible task of recreating that feeling. By the end of the story, I had experienced the intense catharsis I needed to end this story cinematically. And no greater thank you can be laid at the feet of David Yates and Steven Klovis (the screenwriter) than that.

** Also for the record, I do have a few nitpicks with the film. Why did they decide to cart off all the Slytherins to the dungeon before the big fight? That kind of goes against some MAJOR themes in the book. And I didn’t love the decision to have Fred’s death be off screen. But honestly? Screw it.