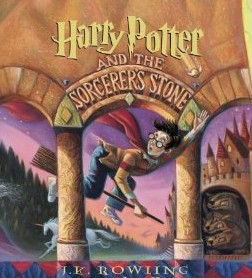 Harry Potter and The Sorcerer’s Stone

Perhaps it seems redundant to you to read yet another article about Harry Potter, especially three years after the final book came out. However, one of the singular joys of being a Harry Potter fan for me has been the ability to revisit these books throughout my life and discover new and exciting things about them. I’ve never stopped experiencing the magical world of harry potter, even once new things stopped coming out.

Thus, when I was thinking about creating my first feature for My Bookshelf, I realized that I was already doing it: I decided this summer to (for the first time in an absurdly long time) delve back into the world JK Rowling created with a vengeance. Don’t get me wrong, I’ve picked up the odd book or two throughout the years, but I haven’t re-read them all start to finish for a long while. And in my first summer break as a teacher, I decided nothing could better fill my time.

So here’s my reflections (there’s no point in pretending I’m going to review these books) on Harry Potter and The Sorcerer’s Stone:

For one thing, I’d forgotten how good that story is. It has an almost perfect arch, bringing Harry from clueless orphan to confused adolescent. The introductions of Ron and Hermione are surprisingly seamless as well. In fact, the most remarkable thing about the first book is realizing just how well realized this world already was. Without a single mention of either hallows or horcruxes, Rowling has effectively established the world where these life changing entities exist, but has filtered it through the severely limited understanding of the 11 year old protagonist who leads the books.

I’m not interested in recounting the plot; between the movies, books, and overall popular culture phenomenon-ness of Harry Potter, you either already know the plot or don’t care. And I’m not super involved in the themes yet (those will almost certainly come up later). What I’m most amazed at in re-reading the first book is the feeling of possibility, an in feeling almost overwhelmed by how well these books turned out. Although, as I’ve said, I actually think the inaugural effort is very good and that retrospectively speaking its easy to see the characterization, thematic control, and plotting that would come to define Harry Potter as a series, it’s also just as easy to see that this book could have been nothing. I stare at the goofy cover art, now as dear to me as a beloved childhood toy, and think, “This doesn’t scream multi-billion dollars.” Or I read the adorably sincere dedication from Rowling to her daughter and the other two women who helped her along the way, and I realize how tenous it all was.

It all fills me with an enormous sense of… kizmet, I guess. And in a way it all ties back into Dumbledore’s final speech about how Choice, not Destiny determines our Fate. These books, in my opinion, took the right choices every step of the way.

Not every book reflection is going to be so laudatory, but the first book really just feels like this time capsule back to the moment when I first felt these books in my hands. I certainly didn’t know that I was starting an obsession that would come to define some of the most important moments in my life, that would be my consolation in the tough times, and a favorite recreation during the good times. It was just a present. On my 11th birthday, I opened the front cover to a handwritten inscription that said, “Rachael- if there was ever a movie version of this, we could see you playing Hermione. Love you.” And I remember being OFFENDED, while reading, to think that I could play this annoying, shrewish little girl. But much like Ronald Weasley, I came to love her, and the books that contained her, in all their poofy-haired, magical glory.