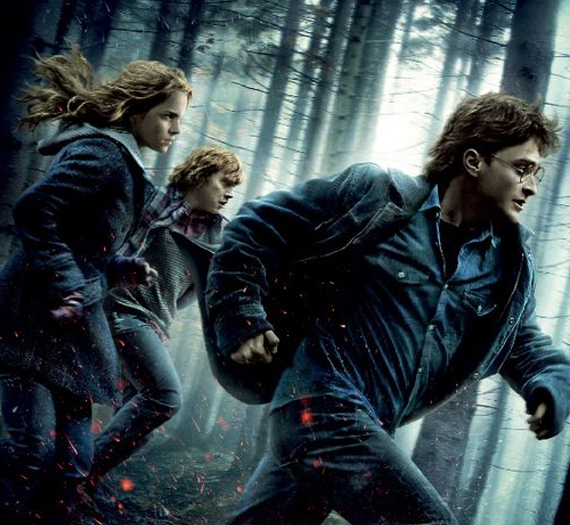 …And The Deathly Hallows

If I were to remake the list below, Deathly Hallows would easily and handily fall at number 1. It wouldn’t even be a debate. Let’s just get this out of the way, right here: to me, Harry Potter and the Deathly Hallows was easily the best film of the series, the best adaptation of a Potter book, and one of the best films of this year.

In a lot of ways, DH represented the perfect melding of book and movie. Freed from the crunching time constraints that the last four books have had to deal with, and with a fanbase that have almost all aged out of tweendom and strongly into “legitimate adult audience” world, Deathly Hallows is, appropriately, the most adult and compelling of the films.

I’m going to attempt not to conflate the book’s excellence with the movie’s own excellence. Of course Deathly Hallows tells a deeply fulfilling and appropriate story: we already read the damn book. JK Rowling’s concluding chapter was a masterpiece of devotion to theme and character and the culmination of years of effort. But the movie lives up to this standard by taking the excellent material laid down and making it come to life cinematically.

As directed by David Yates, far less of the Harry Potter emotional journey is spelled out than ever before. The characters are going through some of the most intense emotions they’ve ever felt, but gone are the days when they will, child-like, spit it all out at the camera. Yates has such faith in his actors and audience that finally the series lets subtext remain subtext. You don’t need to be told every detail of what’s going on. We don’t need Harry, Ron or Hermione to ever monologue about how weird it feels knowing the whole fate of the wizarding world lies on their shoulder, or how much more serious the danger is in this installment. In true cinematic form, we can tell from the imagery (Hermione’s hands caked in Ron’s blood, the casual death of a Hogwarts professor, Harry and Hermione’s make out scene) and from the quiet moments (like Hermione’s thoughtful line as the trio stands alone in Grimmauld Place, “We’re alone.”).

The way you can really tell that this is an excellent adaptation of the books is in the stuff that it just plain makes up. From the first shot of Hermione wiping her parents memory to protect them (which is mentioned in the book but not shown), you can tell that Yates and Kloves understands exactly what this means and they’re counting on you to get it too. And damn if Emma Watson isn’t knocking it out of the park, showing both Hermione’s steely, bad-ass determination and how much it deeply hurts her to have to do this to her parents at the ripe old age of 17.

Or take the oft-discussed tent scene. It takes place right after Ron has (spoiler alert) left Hermione and Harry in a fit of horcrux-and-jealousy-induced rage. Hermione has been a vacant mess. Harry, being a good friend, starts goofy dancing with her to cheer her up. But they’re also to mature individuals who are stuck in a bleak, cold world with little help, and there’s a tiny moment between the two where it almost seems like this is going to a very non-canonical place. The ultimate decision by both characters to realize what their relationship really is therefore seems both more honest and more profound for the movie having gone to a place that the book never had to. It’s both true to these characters and completely fabricated, and it provides a very vivid portrait of both the grace and realisticness of Harry and Hermione.

The fact that the added details feel perfectly in place is the greatest indicator that this movie, even more than any of the other films, gets what made the books worth it.

I could write a book full of praise for the main three’s acting in this film. Gone are the days of awkward line readings, forced emoting, and eyebrow acting. All three main stars have blossomed into something fantastic. But if I had to give an award for best performance, it’d go to Emma Watson, hands down. I’ve mocked the girl who took my role for years. She was the weakest link for a while. But Watson provides such a painful, quiet, deeply flawed and wounded and yet strong and badass performance as Hermione that it made me love one of my favorite characters of all time even more for having seen it. There’s another tent-scene, where Hermione slips back into her old school-girl esque habits (“Actually, I’m highly logical…”) in which you can really tell just how far Watson has come from the old “Wingardium LeviOsa” days.

Some people are claiming the movie feels like only half a film, or is somehow unsatisfying, and I guess I can understand that, but for me, Deathly Hallows was everything it needed to be and more, and a beautiful testament to why it’s worth it to adapt beloved books to film.

Harry Potter, the book and movie series, hasbeen such a profound part of my life for so long that the discovery of new levels of enthusiasm was a pleasant and fantastic surprise. The reason why it’s ever worth the effort to adapt a book to a movie is not just to make money but, in a movie like Deathly Hallows, its the pure unadulterated joy that can come from watching a new work of art being spun from something amazing to begin with.