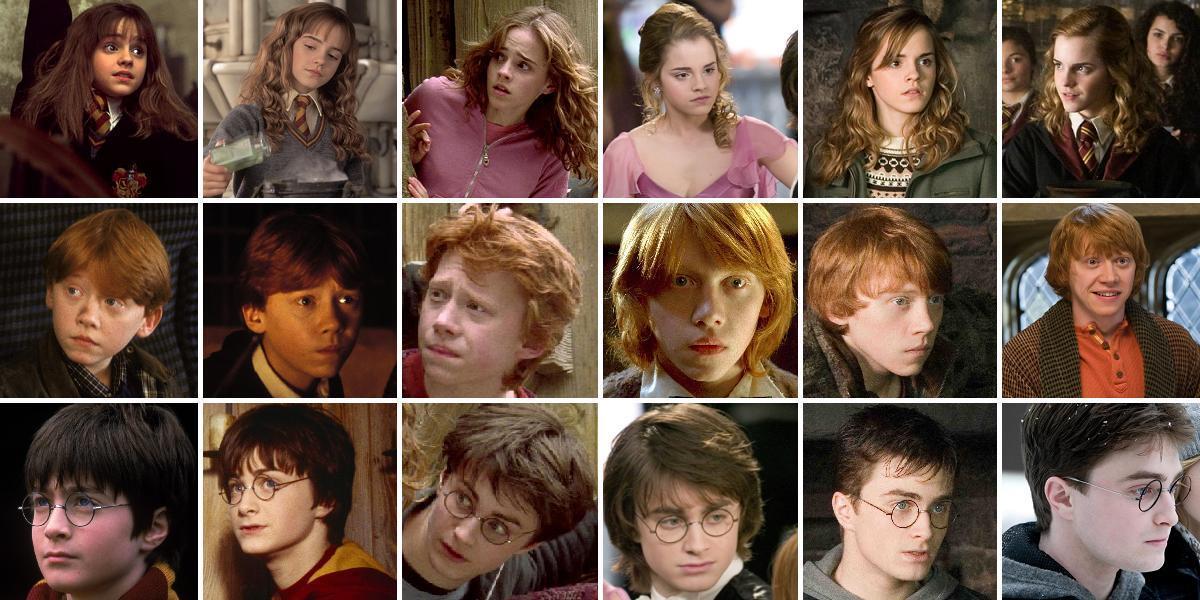 Everytime I’ve tried to sit down and review the most recent installment of Harry Potter, I felt overly burdened by the attempt to unpack all my (and any tried and true Potter-fans) baggage walking into the theater. The baggage weighed down the review, until all cinematic point was lost, but I felt that the review was dishonest with out it. And then, like Barty Crouch Jr. provided Triwizard tournament hint, an idea struck me: why not just get all the baggage out of the way in its own post?

In other words, this is a post about the history of the Harry Potter film series, as I see it. Up front, keep in mind that I am a rabid, if not super-rabid, Harry Potter fan, who has shown up for the midnight release party of the last three book, and who received her first copy of Harry Potter at the tender age of 11. It is an understatement to say that this series has been a huge part of my life.

However, I was also a film major. That’s not to say how fancy-pants I am, nor say that I am inherently more qualified to judge films, merely to point out that I have often been able to let my fan ardency for exactitude fade to a quiet whisper while watching a Harry Potter film (as will become abundantly obvious in the following list). So without further ado, here’s my top six pre-Hallows Harry Potter films, in order from least-beloved to most.

6. Harry Potter and the Sorcerer’s Stone– In an overly pithy sentence, it’s as though the book version of Harry Potter has cast a “petrifiucs totallus” spell on the movie’s first installment. With unoriginal direction by Chris Columbus, and combined with an over adherence with the book’s minutiae, the Sorcerer’s Stone completely fails to capture the magic of Harry Potter that has kept fans enchanted for so many years. Movies and books are inherently different mediums, and adapting one to the other requires more than just cutting stuff out for time- it requires a complete transfiguration.

4. Harry Potter and the Order of the Phoenix – There’s not much to say about Order of the Phoenix. It takes the longest book and makes the shortest movie. Along the way, a lot is lost. This is good (even JK Rowling claims the books to damn sprawling and could probably use a good weed whacker editing job) but it makes it a less satisfying adaptation. I remember seeing it for the first time and kind of feeling as though I’d just watched a montage of important Harry Potter moments rather than one cohesive film.

3. Harry Potter and the Goblet of Fire – Goblet of Fire was probably the most cinematic of the books. It tells a straight forward adventure tale of a too-young boy entered into a dangerous contest, and it has a natural ebb and flow along the lines of the three challenges that makes it really easy to transcribe to film. Mike Newell, the first British director to helm a HP film, turns the tale into a fast-paced school boy yarn, weaving the magical elements with the under dog elements. It makes it all the more startling when, at the end of the film, the tone shifts abruptly. The death of Cedric Diggory, and consequent return of Voldemorrt are where both the books and the film abandoned the pretense of safety, and it’s an appropriately moving moment in the film. However, the film loses major points for its ending. So Voldemort’s back and Cedric, Harry’s rival in love, Quidditch and Tri-wizardry, has just been brutally murdered before their eyes. Basically, everything’s gone to shit. So why does the film end with the trio playfully ruffling each other’s hair? It’s a dishonest moment within the film’s universe that threatens to undermine the story’s legitimacy. Also everyone has REALLY bad hair.

2. Harry Potter and the Prisoner of Azkaban – Alfonso Cuaron changed it all. When he took over the Harry Potter reigns for the series’ third part, he famously decided on a theme for the stories to follow and then slashed out everything that didn’t pertain to that theme. This means that Azkaban is, by far, the WORST adaptation of the books. But it just might be the best movie. By deciding to focus on theme and cinematic excellence, Cuaron allowed the series to move away from a cheesy kids movie and into the deep, wonderful series that we knew and love. On top of that, his “serious director” prowess was the first step towards building actual actors out of the trio at the heart of this film, rather than just treating them like adorable props. But his overall lack of reverence for the source material IS problematic, and that’s why despite the movie’s excellence, Azkaban falls back to number 2.

1. Harry Potter and the Halfblood Prince – Aside from burning down the Burrow in the middle of the film (seriously, what was that?), Half-Blood Prince strikes the most succesful balance between Harry Potter adaptation and really freaking good movie. It’s a pivotal film, full of dark and impending danger, but it was also probably the funniest of the books, with many, many chapters devoted to the characters love lives and growing up mishaps. In many ways, Half Blood Prince the book was like a breather in between the ominous anger of Order of the Phoenix and the near unrelenting gloom and danger of Deathly Hallows, and the movie carries that sense while still taking the journey of Ron, Hermione and Harry into adulthood seriously. And the climactic journey into the cave and invasion of Hogwarts? Picture freaking perfect.

*Bonus points if you get the punniness of this title