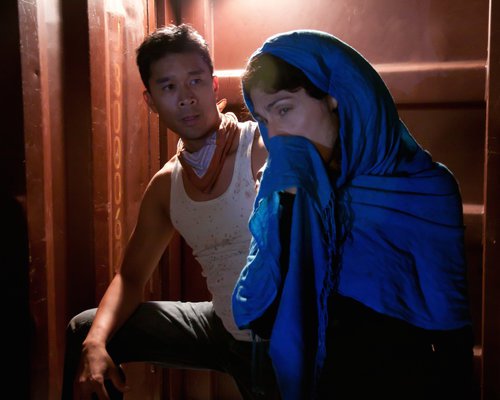 I can only imagine that the experience of a refugee is one of exhaustion, fear, and utter resolve. But it must be one of tedium as well; so much time spent travelling in such uncomfortable, de-humanizing surroundings. Set in a literal shipping container which has been set up in the Berkeley Street Theatre courtyard, Zachary Florence throws all these elements into visceral relief in this tense, electrically performed remount of his production which originally premiered at Summerworks in 2014. The play itself (and the concept of staging it in an actual container) comes from English writer Clare Bayley, who conducted interviews with refugees in her writing of the play. In her author’s note (composed specially for this production) she writes that she wanted to bring “the subject back to a more human scale”, reminding us that “[e]ach one of those millions of displaced people around the world is an individual, with a story”. The resulting script is an elegantly, sometimes a little too elegantly, structured piece that brings six of these stories together into an hour of extremely engaging drama.

The cloistered space is empty when the audience (15-20 or so, max) is first escorted inside, allowing us time to absorb the drab, stultifying surroundings concocted by set and lighting designer Jennifer Lennon. The seats are wooden boxes covered in blankets, a U-shaped seating plan which turns the container into a kind of thrust stage. A lightbulb or two throws everything into tenuous illumination, and a curtain hanging in the corner is revealed to be masking the latrine which none of the container’s inhabitants can waste time feeling embarrassed to use. The unfurnished metal walls of the container emphasizes the grudgingly sparse and monotonously cramped nature of the space. Gradually, the actors quietly walk into the container, unobtrusive to the point that, were it not for their distinctive wardrobes, they could be mistaken for audience members. It’s a straightforward and effective way of establishing the claustrophobic world of the play which dictates the increasingly desperate situation of its characters.

We begin mid-ride: when the doors are shut and the lights go up, there are four people aboard: Fatima (Bola Aiyeola) and her daughter Asha (Ubah Guled), Ahmad (Victor Ertmanis), and Jemal (Adriano Sobretodo Jr. who was nominated for a MyTheatre Award for his performance in 2014). A fifth person is suddenly let on, Mariam (Lara Arabian), who, like Ahmad, has come from Afghanistan. She is in possession of food and (this being a play) secrets. As the story progresses, the characters barter over food, water, and eventually money, all the while revealing distinct backstories and survival strategies, all in hopes of making it all the way across the Channel to England. Nick Carney’s excellent sound design creates the sense of a constantly moving vehicle, with the truck’s sudden and ominous stops landing that much harder as a result. The space is mercifully air-conditione and, while it’s obviously cloistered and crowded, it does not feel stultifying (though of course experiences may vary; the production team has ways of extracting overwhelmed audience members from the container). Florence and Bayley ensure, however, that we are brought into visceral proximity to the least dignified aspects of this kind of journey. The director has blocked the play dynamically, performers making fluid use of the space without ever seeming obstructed by audience members sitting right next to them.

The actors all give very strong performances, though early on in the proceedings they seem more pitched for a regular theatre space than the close quarters they inhabit. It’s an interesting issue when staging a theatrical piece in such a small space: how scaled down should the performers be? In the first half, Guled and Ertmanis give the most convincingly naturalistic performances, he withholding and fatigued, she pragmatic and open enough to convince Arabian’s Mariam to confide in her. By the second half of the hour, though, when the appearance of the Agent (a low-key and ominous Constantine Karzis) who has arranged everything spurs a frantic showdown amongst the refugees, the entire ensemble is on fire: special mention to Aiyeola for presenting an utterly convincing descent into complete desperation. Sitting barely five feet away from her was an extraordinary experience.

The play seems to reach a definitive climax about forty-five minutes in before going on for another fifteen. While the conclusion it ultimately reaches makes sense in plot terms, it does feel like a slightly over-extended epilogue in the face of what has come before. Still, this is a beautifully performed and vibrantly executed show. It avoids exploitation of the current crisis (by my naive eyes, at least), humanely inhabiting it instead.