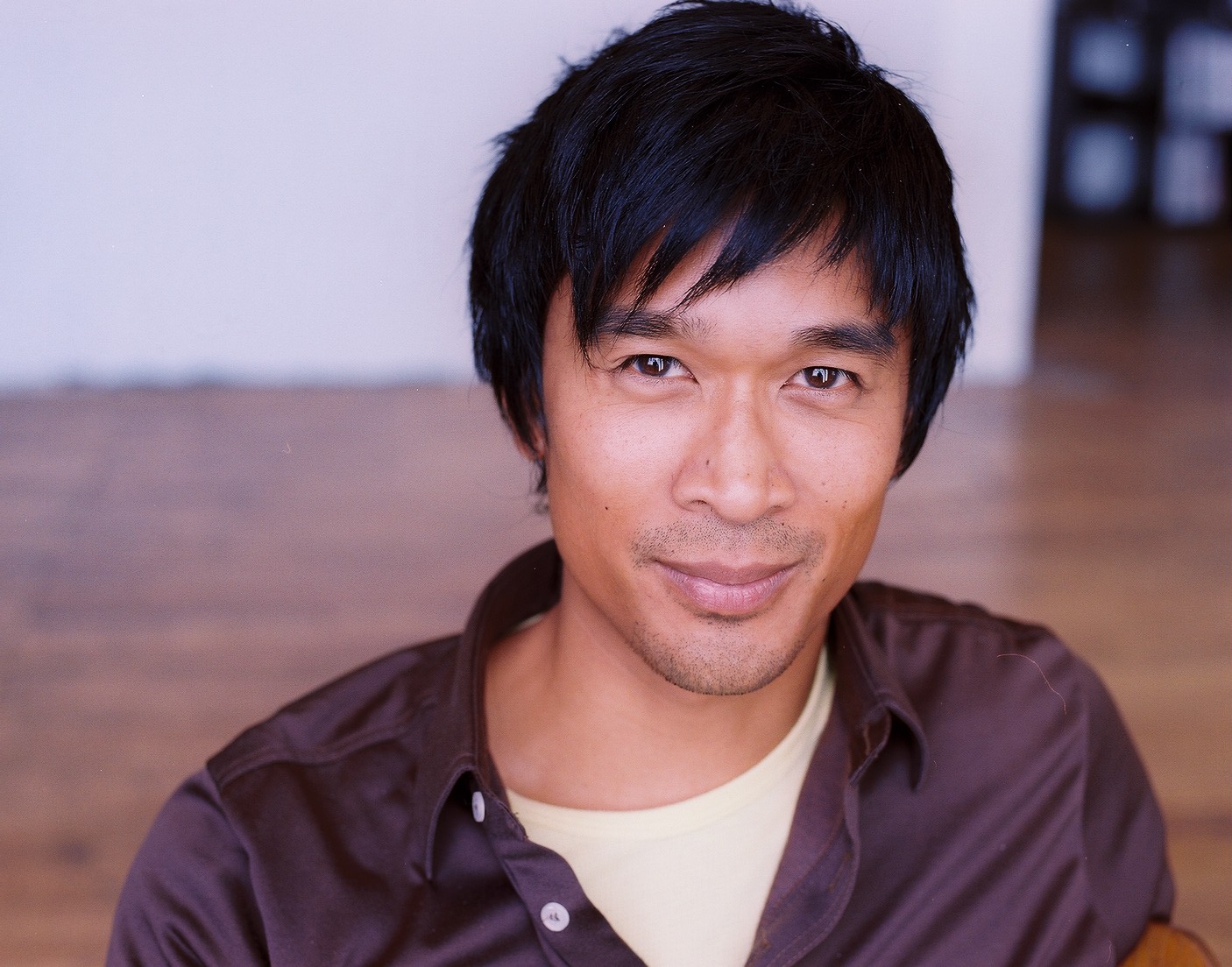 After appearing in our Best Regional Production winner last year (FeverGraph’s Look Back in Anger), Adriano Sobretodo Jr. proceeded to deliver one of the most captivating performances at the 2014 SummerWorks Festival as an illegal immigrant wasting away in a shipping container in the desperate hope that he’ll find a better life when the doors finally open.

The Best Supporting Actor nominee stopped by the interview series to tell us about surviving The Container, recount the story of his first date (which is totally relevant; you’ll see), and spin some impressive container-related metaphors.

Can you remember your first experience with theatre?
The first show I saw was Phantom of the Opera. I remember my whole family sitting in the very back row of the top-most balcony. That show blew my mind. I bought the CD in the lobby on the way out. Whenever I hear the music I still see the stage as this small speck in my field of vision, as if I never left the cheap seats.

Do you have any dream projects?
I want to be Peter Pan. Not the Peter in tights with leather booties singing show tunes and swashbuckling with a toothpick. But more the one JM Barrie describes in his novel Peter and Wendy who is more self-centered, the bad-ass who declares he can’t even remember the names of the pirates he’s killed. Litmus Theatre, a company I often work with that drops big stories in site-specific locations, is collaborating with playwright Jordi Mand on an adaptation of the Peter Pan story that focuses on Wendy’s perspective. It’s going to happen!

What’s your favourite production you’ve ever worked on?
In 2010 I formed a company with two friends from my graduating theatre class at York University, the above mentioned Litmus Theatre. Our first production started out as something to pass the time. Matchbox Macbeth was an hour-long adaptation of Shakespeare’s classic told by 4 actors in a backyard shed off an alley in Little Italy. More specifically, it was the shed behind my share-house in Little Italy.

In the dead of chilly October, we performed to 15 audience members at a time who were tucked in with blankets. The show eventually landing on NOW’s Top 10 Productions list for 2010. We got written up in Plays International in the UK. And then it was over. The shed has since been demolished, condemned by the city a few months after our last performance.

In 2013 you were a part of FeverGraph’s Look Back in Anger, which went on to win the My Theatre Award for Best Production. Tell us a bit about that production, your character Cliff, and working with Best Director winner Anita La Selva.
Anita did wonderful work on a tough play that doesn’t get staged very often. The development process for Look Back in Anger involved many challenges. First, we needed to whittle the lengthy script down to a more manageable core. Then we contextualized the language for a contemporary Canadian audience. And the final blocking only solidified after long hours of improvisation. FeverGraph is a movement-based theatre company, but at times it seemed counter-intuitive to layer physicality on top of what is often considered one of the first kitchensink dramas. But we stuck with Anita’s vision, constantly questioning and refining along the way. The result was an insightful and fresh take on a classic play.

I played Cliff, a working class Welshman who self-describes as “common.” I love the way playwright John Osborne inserts Cliff into scenes even though he may not say anything for pages at a time. I often felt the audience turning to me each time something horrific unfolded. I felt like the emotional barometer in a pressure-cooker room.

How did you get involved with The Container?
Like my high school basketball team, I didn’t make the team first time around. My audition went well, but I wasn’t offered a part until another actor had to leave the project. It felt weird joining a group that had already started the process, as if I was arriving to the party as they were starting to cut the cake. But, I’m all for making the most of an opportunity, regardless of the circumstances.

Did you do much research into refugees and the real-world realities that inspired the piece?
It was all academic until I came face to face with someone who went through a similar ordeal to the smuggled migrants in the play. I met Maran Nagarasa through our partnership with Romero House, a not-for-profit organization that provides support to newly arrived refugees and immigrants. Maran, a journalist from Sri Lanka, was facing death threats for reporting on his country’s civil war. He fled by sea with 80 other asylum seekers in 2009. His boat arrived on Canada’s west coast weeks later. He was greeted at gunpoint by our coast guard who promptly confiscated his journal that traced the details of his voyage. Maran was devastated. After all his hardship, he wanted the written account of his trip in the hands of his wife and daughter back home in Sri Lanka. He never got the journal back. And he still has not seen his wife and daughter to this day. Even though The Container is not Maran’s story, it does draw attention to the neglected stories of illegal migrants.

The actors and audience were literally shut in a shipping container for the duration of the play. How did that experience affect your performance and understanding of your character?
Considering the weight of the subject matter, you may be surprised to hear that I was continually trying to suck the emotion out of my performance. There just wasn’t room for it. Of course there are times when everyone breaks, including my cynical character of Jemal. But for the most part, I was focusing on argument. Not argument as in yelling and screaming and throwing shoes at each other kind of argument, but different ways to persuade. Aristotle divided persuasion into ethos, pathos, and logos, which Wikipedia tells me means appealing to credibility, emotion, logic. I was trying to squash the emotional pleas in favour of persuading based on Jemal’s experience and cold hard reasoning.

What were some of the rewards and demands of such an intimate space for a performer? Especially one so effective in its discomfort.
The first time I went to a movie with a girl I liked, my spatial awareness went into hyper-drive. Where was my elbow in relation to her elbow? Our knees are touching. But not anymore. She’s definitely leaning towards me. Oh, Amy-what’s-your-name, if you only knew!

Acting in a 20x8x8 container with 5 other actors and 20 spectators also makes you hyper-aware of your surroundings. A natural choreography evolved with each show. It’s not unlike negotiating a crowded Bay street sidewalk at noon, slipping right, ducking left, making yourself thin as glass as you slide past between fellow pedestrians. Every night it took Olympic coordination to bound over a sleeping cast mate – coming within an inch of trampling her legs – and stop short of the container’s metal doors.

Did anything ever go wrong?
The Container ends with a quietly charged moment among the stow-away migrants. All was silent in the shipping container behind The Theatre Centre, as the slightest sound could lead to death. Meanwhile, another play at SummerWorks, Maracatu You, ends with a fun in the sun Afro-Brazilian drum circle that spills out from the main performance space at Theatre Centre. The two worlds collided when both SummerWorks performances ended at the same time.

The Container was nothing if not an intimate experience. Tell us a bit about working with your co-stars on that project.
I struggled with this this play. After meeting with the actual refugees from Romero House, I wasn’t sure if I was the right person to be telling this story. Coming face to face with people from Canada’s refugee community instilled a sense of responsibility to the text that I wasn’t sure I was prepared for. And that’s when I leaned on the other members of the cast. After a particularly heavy rehearsal I wandered aimlessly along Queen West with cast-mates Bola [Aiyeola] and Ubah [Guled]. We ended up getting ice-cream, barely saying a word to one another the whole time. After a tough day at work, it was nice to find solace with friends and ice-cream.

What would you say is the most important conversation you had with your director during the rehearsal process?
Before I hopped on board, I needed to make sure this wasn’t sensational or exploitative. Since we were staging a show about human smuggling inside a shipping container, I needed reassurance that this wasn’t going to be like an amusement park ride. Zachery Florence is a thoughtful and sensitive director. Humbly, he, like the rest of team, admitted he didn’t have all the answers. But, I think that’s what a play like this needs: a group of artists continually questioning what the hell they’re doing.

Do you have a favourite moment in the production?
There’s a brief moment of pure joy and relaxation where I share an apple with our youngest cast member. It’s a simple exchange, but it’s such a relief after all the tension amongst the characters.

What are you doing now/ what’s your next project?
Litmus Theatre is working on adapting and staging an immersive, site-specific theatre production based on Brave New World by Aldous Huxley. We are currently in development, but look out for the production in 2016.

Do you have anything you’d like to add?
I feel like I’m the last one to get the inside joke, but it only occurred to me on closing night that a container is more than just a rusty shipping box. It is also something that contains, limiting its contents from spilling out into the world. And that makes sense to me. I was always trying to keep it together. Containing focus, containing space, containing emotion.