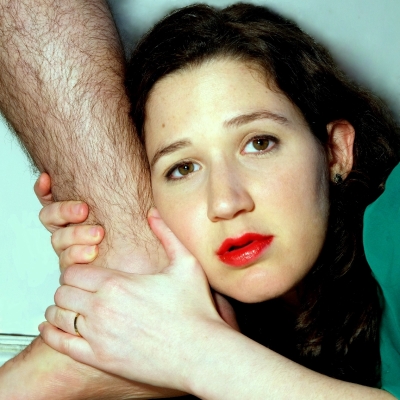 Ya’akobi and Leidental
It starts out light, but ends on a rather depressing note. Ya’akobi, played by Daryl Green, is sick and tired of living a quaint life with his friend Leidental and so he decides to change things up. He wants to see the world and meet more people. He very quickly meets a woman named Ruth, performed by Adi Lev, with a rather large backside and decides he is falling for her. As she plays a game of “hard to get”, Leidental tries to fill his void of loneliness by keeping the two company. Ya’akobi and Leidenta, directed by Bence Kalo, is a story of love, friendship and of what happens when we move into new things too quickly.

The play has much potential to leave audiences laughing and happy, but instead takes a dreary turn. Everything appears to be cheerful and light, but as the characters’ lives goes on, the dreams and aspirations they had seem to have disappeared.

Much of the laughs at the start begin with Ya’akobi’s obsession with Ruth’s large backside. With time, the audience stops seeing humor in this physical trait, as does Ya’akobi. It is addressed too often at first and so as the play progresses both the characters and the spectators stop noticing this comic aspect. As the married couple drift into a sad state, Leidental, played by Cole Michaels, manages to keep a smile throughout the entire show. This is part of his character but it’s really quite annoying.

The acting is quite good. Everyone brings their own part to the play and are entertaining. The long moments where one of the performers is directly speaking to the audience adds a nice touch of humor. There are scenes that try to resemble a musical performance where one actor begins to sing on stage. Their voices are off key but that seems to be the point. Is it a mockery of musical theater? Is it yet another way to include absurdity into the show? It is not clear. While this is no fault of the actors, there is confusion felt at the end.

For amateurs of the absurd, this is a play to see at the Camden Fringe Festival.

Hot Crisps
A plate of crisps is placed on a chair as thes audience walk in. The title is taken quite literally at first, but it soon becomes clear that this is the joke. The show has absolutely nothing to do with Hot Crisps. This is a selection of comedy sketches by a group called Cheque Please. The trio has a wonderful chemistry on stage, which portrays itself well as the night unfolds. As is the case with many comedy nights, nothing makes sense but almost everything makes audiences laugh. With a couple of angry love songs, a dark Titanic joke and Brexit comments, it has quite a wide range of topics discussed.

Absurdity is not lacking here. In one sketch that stands out from others, the three men are on stage. One is playing guitar while the other is dancing. In the middle, the “brains” of the show begins stating all of the problems faced in the world. It starts with “poverty” and ends with him saying three times “people who repeat themselves”. Written down, this may not seem funny, but it is guaranteed to have everyone chuckling at the nonsense of these few minutes.

One of the members of the trio is a little rounder than the other two and so there are many fat jokes made at his expense. While this tends to get a little old, it is better than having too much blue humour. Indeed, there is not much of this in this show, which is refreshing. The laughs come from the script but also from the actors’ facial expressions. There are moments when nothing is said on stage because there does not need to be. Spectators just need to look at the actors and they are in stitches. This is vital for a successful comedy sketch to keep people entertained.

The lengths of the sketches vary, and some are too short: no one claps, not because they did not enjoy it, but because they were not expecting it to end so soon. On the other end of the spectrum, some mediocre ones are too long. Comedy has no timeframe, but audiences tend to want to smile and laugh instead of waiting for the scene to end.

All in all, Hot Crisps is a silly show filled with ridiculous jokes about everything and nothing. Sometimes, that is just what the audience is looking for.

Does Buddha Eat Haggis?
The title is intriguing and the play is all over the place. The premise is simple: a spiritual, middle-aged mother wants to find herself in a Buddhist retreat in Scotland. Already, it sounds a little strange but the beginning of the show is promising. The jokes are funny and the mood is light and entertaining. As the play progresses, absurdity takes over, but not in a good way. There are healing painting classes and Buddhist dance rituals; it quickly becomes clear that the retreat is not what it is advertised to be. It becomes more difficult to enjoy the production because too much childish screaming and chaos takes place on stage as if it were improv. A redhead with blue eye shadow named Meadow, played by Jade Cadby, leads the retreat. While the production is not all that strong, her performance, although at times a little too intense, is rather entertaining. She truly embodies this original character and plays it very well.

Too much is packed into too little time. The end brings another plot twist but it is too late for that. Not much makes sense. Maybe the play needs to be longer, or maybe it needs to be rethought. In any case, Does Buddha Eat Haggis? tries to talk about spiritual awakening and parenthood; but all audiences remember is the haggis sacrifice and the numerous screaming matches