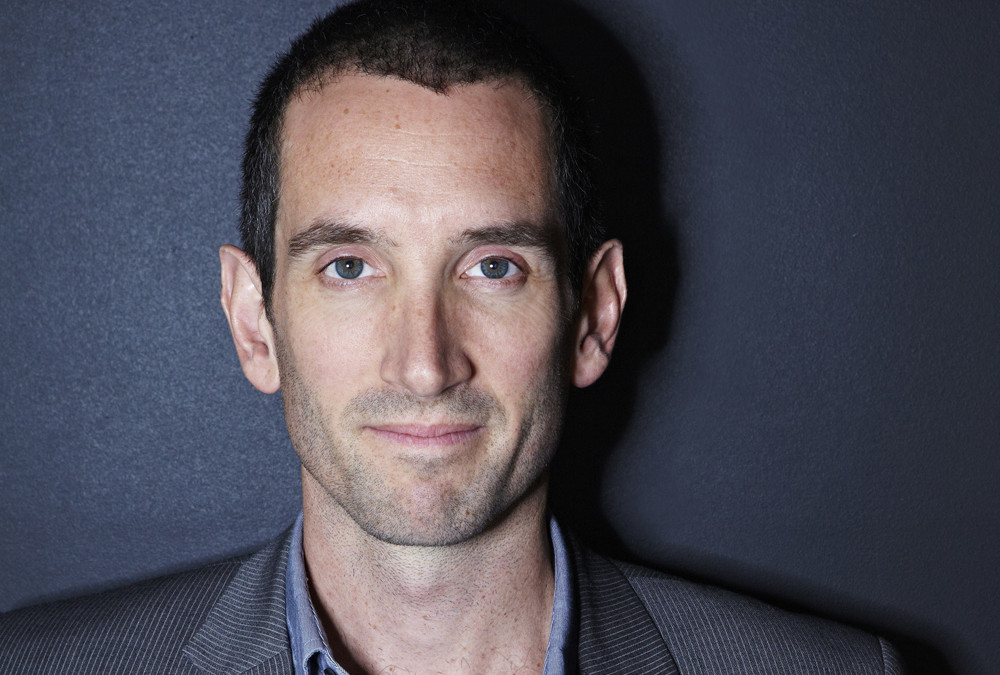 There are three actors nominated for playwriting this year (also known as playwrights nominated for acting), including the always brilliant Gord Rand who joins the Nominee Interview Series for a third time to talk about his Outstanding Actor-nominated work in Stratford’s Oedipus Rex and the Outstanding New Work-nominated world premiere of his controversial play The Trouble with Mr. Adams at Tarragon.

What have you been up to since we last spoke with you for the 2014 Nominee Interview Series?
I have a fairly new kid so a lot of my time has been spent staring into his big brown eyes and fearing for his future. But work-wise I’ve been acting in some television shows – very happy to be in season four of Orphan Black, Winonna Earp, and also shooting a nice little part in Cardinal – based on the Giles Blunt novels. And I’m trying to get a couple of film projects off the ground. But prior to that, writing Mr Adams and prepping for Oedipus really took up my creative time.

Tell us about your Outstanding New Work-nominated play The Trouble with Mr. Adams. How did the idea develop?
I was having a very tough time facing 40 and started writing monologues about it. For some reason I had a terrible feeling about mortality and wondered why it was that a lot of 40something year old men start acting very crazy around this time. And I conceived of an emotionally underdeveloped man who pined after youth – in this case, she came in the form of a beautiful, young volleyball player.

Did you go through a lot of drafts? How did the play change through the development process?
It changed vastly from beginning to end. The dramaturges at the Tarragon – Andrea Donaldson and Andrea Romaldi – were instrumental in giving me an objective eye on my work. But in a play like this I had to write a lot of very murky, very unfriendly stuff in order to sift out the argument. It was important to me that the audience was in constant discussion – emotionally and intellectually – with the action onstage – and that required embracing some lines of thinking that were pretty unpleasant.

Your play received some criticism for its portrayal of Canadian consent laws. How much research went into making sure you captured the intricacies around age of consent and how it’s affected by one party being in a position of authority?
The law is clear. If a person is in a position of authority, the age of consent is 18. But in practice it is more slippery. If the victim is under 16, the defense and prosecution will focus on the younger age of consent – the one that is applicable even outside relationships of authority – because it will result in harsher penalties. And in my play, it was unclear whether anything happened that would have required consent in the first place! John Bell, one of the most highly regarded education lawyers in Canada, acted as my legal advisor. And it made sense to me dramatically because I wanted to talk about a moment of female transformation that most adults find very difficult to discuss – and for me, the age of 16 is when we as a society somehow agree that moment takes place.

What’s your writing process like? Do you plot and plan or just start at page one and work through?
I’m not sure if I have a definable process. I really like strange turns of phrase and odd usage of the language. So I keep my ear out for that. And I act out the parts a lot. I talk to myself in general in life (how embarrassing) and so making my characters talk to each other and playing both parts makes sense to me. The most important part for me is that what I write has to scare me, and I have to write things that I am very unsure about showing to the public. It makes me examine my work hard and forces me to be as rigorous as possible. I also try to make as many jokes as I can – and also to allow for awkwardness to exude from the characters. That’s probably the emotion I feel most of all when confronted with other people – awkwardness. So I think that’s important to put into my writing as well. As my friend Ryan McVittie calls it – and I take it as a great compliment – “exquisite awkwardness”. And it has to be attractive to actors. They have to be able to get genuinely excited about it.

How involved were you in the casting and rehearsal process for The Trouble with Mr. Adams?
Casting was a great discussion between Tarragon, Lisa [Peterson, the director] and me. I love casting, it’s super exciting and there are the most amazing actors in and around Toronto. It was really an embarrassment of riches. I had done a few workshop reads and had astounding actresses come in – when the play was at all kinds of stages of development – who were so generous with their talent and thoughts. Toronto really is a hyper-developed theatre town. The talent is so sophisticated, and alive and adventurous – it’s a gift to any playwright.

How did the final product differ from what you’d originally conceived?
Funnily enough, I looked back on my notes from very early on and a lot of it was bang on! I wanted a tryptych, a sense of emotional trial and a man having to explain very embarrassing aspects of himself to an unsympathetic audience.

Oedipus is often reduced to the complex that bares his name. What were some of the ways you fleshed out his humanity beyond his infamy?
I got to work with Daniel Brooks who is a machine. He works hard, and examines things forensically and we butted heads constantly. The work never stopped. We were driving back and forth to Toronto and when I got in I saw that his car had no stereo. So it was Oedipus 24/7.

What I found was when I would try to figure out what Oedipus was doing line by line, the extremity of the situation presented itself. The curse for example: when he curses Laius’ killer – is so acceleratingly aggressive and so indicative of his tenacious, primal personality. It’s relentless. But the character’s circumstances – it’s a classic orphan story – his will to defy fate and his sad delusion that he has succeeded all lent me a relatable part of him.

How did the modernization and contemporary themes affect your interpretation of the character?
I don’t think it was actually all that modernized. I think we made it so it couldn’t necessarily be placed in time. A ‘classic’ rendition – with masks, plinths and so on – was out of the question. I saw one of those and I thought it stunk because it was so alien. And I think that when you strip it away to its essence – which is what I hope we did – then it becomes immediate and the audience can empathize.

There was definitely an overlap between the plague of Thebes and the present plague of Earth: characterized by the umbrella term ‘global warming’. It was an unpleasant coincidence that the pope came out with his encyclical while we were in previews. The priest of Zeus’ descriptions of the Theban plague seemed taken from our headlines.

There’s an eternal pessimism to the piece that is readily accessible.

Tell us about working with director Daniel Brooks. What were some of the key conversations you had with him throughout the rehearsal process?
We argued a lot. We argued about everything. At some points we were shouting at each other and had to shake hands afterwards! We’re great pals – but in rehearsal we demanded answers, even when there are none, and that’s something we have in common. It’s rare and valuable to find that in a colleague. And Daniel has a mind that always slips away from committing to any one idea, until it’s obvious that it’s the right one. He’s very restless – and to be honest, it was our collective restlessness that seemed to coalesce into Oedipus. Oedipus was fucking furious, man. It was awesome.

Oedipus Rex was played without an intermission and you were rarely offstage. How did you prepare yourself for that level of intensity with few breaks?
To be honest, I had to learn to relax a lot. I spent a long time before each show with my voice teacher Jeanette Peterson (who is absolutely bewitching and awesome) who helped me to be in the moment. That all sounds flaky, but the more relaxed I could make my body, the easier it was to feel Oedipus coming through me. I mean, he is the dude. He’s the guy. Oedipus Rex is THE play.

You spent a large portion of the play completely naked. Was that level of exposure ever uncomfortable for you or did the character’s vulnerability in those moments eclipse your own?
I have an almost religious belief that nudity is beautiful. And I’m vain enough to embrace it when I feel it’s justified. But I’m also self-conscious enough to completely not believe my beliefs when I’m standing covered in blood with a rapidly shrinking penis in front of 500 people! Ha ha! The whole thing was hilarious. And I felt like it was completely justified. I mean, Oedipus is basically stripped of everything that makes a man – and demands to see the people of Thebes to show them what he is. At the risk of sounding totally fucking pretentious – it’s what we dream about doing as actors. It’s a sad, infantile thing – but I truly believe it is profound.

Did you have a favourite moment in that production?
The Curse was pretty good. And a real challenge. There were beautiful moments with the chorus – they were so dedicated and focussed and supportive. All my scenes with Chris Morris were absolutely invigorating. But I have so many moments from that production that basically I would have to sit down with you and the video of it playing in slow motion and that wouldn’t even cover them. It was a dream.

Did you see many of the other productions in the season? What were your favourites?
Yeah, I saw almost all of them. I missed the The Last Wife – which I will regret forever. It’s a fantastic festival – so big with such an expansive, challenging mandate. I mean, they did Carousel and Oedipus Rex in the same season. Amazing. But Pericles was a real standout for me. Simple, exciting and inventive storytelling with a cast that has talent embedded in its DNA. Fantastic.

What are you doing now/ what’s your next project?
I’m producing a film! I wrote a play a number of years back called Pond Life that did pretty well, so I’m making it into a movie. I’m also writing a play which is insane right now – but I console myself that my stuff always starts out like that (and many would argue doesn’t change…)

Do you have anything you’d like to add?
No. Except for thanks for this – it’s great to talk about it all again. I miss stuff so much when it’s gone that I just don’t know what to do with myself!

It’s like that joke: why doesn’t an actor look out the window in the morning? Because then he’d have nothing to do in the afternoon…