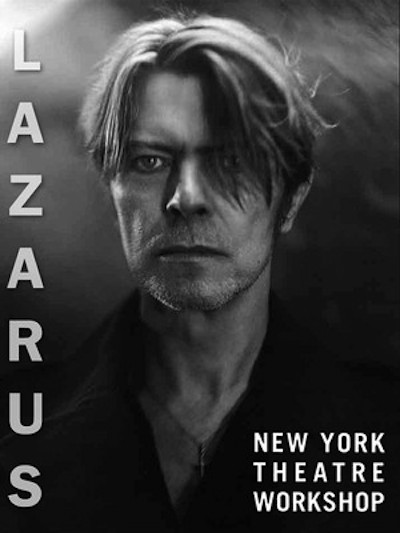 My review of Lazarus was written. Finished. Sitting in my e-mail outbox ready to be sent on the morning of January 11. Then, I turned on the news and heard the headline: David Bowie dead after an 18-month battle with cancer.

That review now resides in an overstuffed digital trashcan, never to be read. Don’t get me wrong. I am not transforming my critical assessment of a workshop musical into a gushing declaration of adoration. I am being honest. Bowie’s death fundamentally altered my perspective on Lazarus. It would be careless to publish my original review now that my perception of this artistic experiment has so drastically changed.

So I started over.

New York Theatre Workshop’s production of Lazarus is a highly conceptualized “sequel” to the 1976 film The Man Who Fell to Earth (and the Walter Tevis novel by the same name), featuring Bowie’s musical catalogue and a book devised by Enda Walsh. Bowie approached a producer in the summer of 2013 with an interest in revitalizing The Man Who Fell to Earth as a musical play, and the workshop began to take shape in late 2014. Bowie was reportedly diagnosed with liver cancer in early 2014 and learned that he was dying about a year ago. All the while, he was developing Lazarus until it opened off-Broadway in early December 2015.

The film The Man Who Fell to Earth starred David Bowie as Thomas Jerome Newton – an alien stuck on earth, longing to get home and caught in the throes of depression and alcoholism because of it. That is where the play begins.

In the words of Hamilton’s Aaron Burr – confession time? Here’s what I got:

zero knowledge about David Bowie or his music.

Yes, I settled into my front row seat at Lazarus blissfully ignorant about the show’s creator and his body of work. I vaguely understood that he had some rather exotic androgynous personas at some time in the distant past* and, as the show progressed, I recognized a few musical numbers. Okay. Two. I knew two songs. Even worse? One of those pieces I only knew as “that awkward song from Moulin Rouge featured in the Elephant Love Medley.”**

By the end of Lazarus, two conclusions had formed in my untainted mind. The first? Walsh’s plot transitions from overly convoluted to remarkably thin, leaving the audience feeling perplexed and unfulfilled. The second? The harmony, melody and artistic imagery in Lazarus blend together to create an intoxicating and challenging sensory experience.

In the musical, a wealthy alien named Newton has fallen into a lethargic fog, self-medicating with gin and Twinkies*** after giving up all hope of returning to his planet. His equally lethargic house-keeper, Elly, (also self-medicating) begins to adopt the identity of Newton’s long lost blue-haired love and gets involved with a dangerous murderer named Valentine whose feelings of alienation draw him to Newton. While holed up in his Manhattan apartment, Newton is visited by a trio of teenagers and the limbo-trapped soul of a murdered Girl who want to help him get back home – who want to make him whole again. It is unclear if they succeed. Actually, many aspects of the Lazarus plot are unclear. Why does Newton’s depressed housekeeper suddenly decide to transform into Newton’s old girlfriend? Who is Valentine, how does he know Newton, and what motivates his murderous rampages? Why did Newton’s girlfriend leave him and why did he come to earth in the first place? How exactly does the Girl help Newton (and why)? I will stop there, but you get the picture. Let’s just say that, near the end of the play, Newton and the Girl are diving around on stage in “blood” that looks like milk. Confused? Me too. Perhaps the entire plot occurs in Newton’s addled brain. Perhaps all of the characters reflect parts of Newton as he engages in a serious self-examination of his existence on earth?

Okay, I lied. My first review was not entirely trashed. That last paragraph is an excerpt from it. In my initial review, I significantly downplayed (nay, discredited) my last point. That was a mistake. Many have proclaimed the song “Lazarus” to be Bowie’s self-penned epitaph, but Lazarus goes deeper. Newton’s tumultuous past haunts him as his psyche crumbles. He breaks completely, weighed down by the fear, regret, pain and loneliness that accompany despair. But, in that tortured place inside himself he finds a powerful motivator: hope. Belief that even the darkest moments of being will be vanquished, and peace and happiness will fill the void. While my mind buzzes with dozens of questions and critiques of the plot, the essence of Lazarus – the juxtaposition between complete self-destruction and tranquil rebirth – reverberates with more poignancy now than it did when I saw the production. Bowie’s revelatory swan song is this: after death, there is life.

The cast of Lazarus embraces both the message of the show and the showmanship of the man who inspired it. Michael C. Hall’s performance honors Bowie’s artful public guise both in vocal talent and in presence. He is one hell of an actor who offers all of himself to this role, and the results are mesmerizing. Young Sophia Anne Caruso gives a subtle and shining performance as the Girl, and she similarly impresses with her vocal talents as Hall’s duet partner in multiple scenes. Michael Esper, who won me over wholeheartedly in Sting’s The Last Ship, takes a dark turn in Lazarus as the sinister Valentine. While his blood-filled rendition of Valentine’s Day startles in its depravity and showcases Esper’s range, his overall performance feels more calculated and less natural than that of his peers.

Jan Versweyveld’s scenic and lighting design, coupled with Tal Yarden’s engrossing video design capture the eclectic and vibrant spirit of Bowie’s music, and the video design often serves as an artificial member of the ensemble – an enchanting artistic effect to be sure. In addition to the visual artists, the seven-member band infuses the intimate theatre with their jazz-laced orchestrations, and both the sound designer, Brian Ronan, and the music director, Henry Hey, deserve recognition for their strong work.

Ultimately, Lazarus is neither an astounding play nor a brilliant musical in its present form. The piece needs work. However, my Lazarus experience reminded me of an essential truth. Art never stands alone – it comes from somewhere. From someone who has passion and purpose. In my efforts to critique, I occasionally lose sight of that truth.

Thank you for the reminder, David.

Lazarus closes on January 19. All remaining performances are sold out.

** Don’t believe me – the exchange goes something like this:

Nicole Kidman: You, you will be mean.

[Me: Ah, well that settles it.]
Nicole Kidman: And I’ll, I’ll drink all the time.

[Me: Whoa, that came out of nowhere. Has she had anything to drink yet?]
Ewan McGregor: We should be lovers.

[Me: Uh, she just admitted to being an alcoholic that fears you might abuse her – are you sure that’s the response you want to go with?]