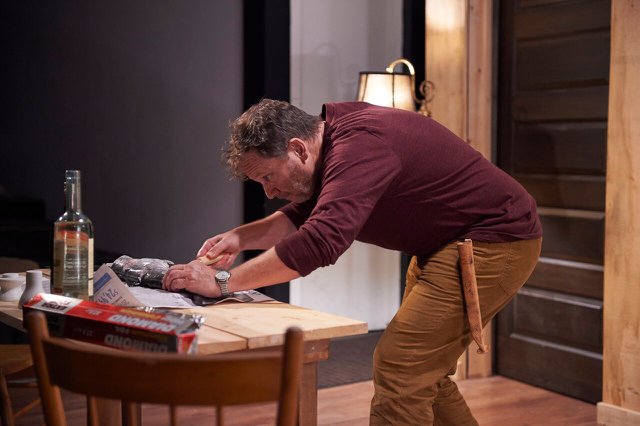 On Stage in TO: Love & Pain

The Immigrant (Harold Green Jewish Theatre Company)
You know Mark Harelik, or at least you know his face. He has a recurring role on The Big Bang Theory; he was Topanga’s dad on Boy Meets World; he’s in an episode of Breaking Bad! The reason Mark Harelik is here to be a familiar face in our modern televisual landscape is that his grandparents Haskell and Matleh Harelik did something so remarkable that it feels like fiction- they packed up and moved across the ocean, trading in 1909 Russia for small-town Texas where they didn’t know the language, didn’t know a soul, had nothing but a fledgling banana-selling business and were unable to fully practice their religion on account of being the only Jews for miles. It’s an incredibly moving story full of amazing human strength and kindness and fault and goodness, a story that Mark Harelik (with the help of Steven M. Alper and Sarah Knapp) converted into a musical called The Immigrant which the Harold Green Jewish Theatre Company has now put on stage at the beautiful new Greenwin Theatre at the Toronto Centre for the Arts. What’s most moving about Haskell and Leah (as she’s known in the musical)’s story is that, unfathomable as it is, it’s really the story of almost everyone on this continent, a land of immigrants. Behind the tenacious, stubborn, loving Haskell (played with stirring nuance and gorgeous vocals by the great Sean Arbuckle) there are millions of men and women who made similar journeys. Behind Tracy Michaelidis’ tentative and resilient Leah are millions of men and women who faced similar struggles. Steven Gallagher and Kathryn Akin (who, in particular, brought out all my tears) as the locals who show Haskell and Leah incredible kindness are beacons of what we should all strive to be (though the characters are insightfully not without deeply human flaws themselves). The cast in this straightforward but affecting production is sublime both dramatically and vocally as they come together to tell a personal, universal story.

The River (Coal Mine Theatre)
Jez Butterworth’s The River is poetic, confusing, atmospheric and unsettling both in the first place and secondarily because you’re not quite sure why you’re feeling unsettled. Is it because the magnetic David Ferry is tossing around careless sexual chemistry with both Jane Spidell’s charmingly blunt “Woman” and Dani Kind’s younger, more vulnerable “Other Woman” in equal measure? Is it the seamless transitions between realities and challenging wait-and-run pacing director Ted Dykstra mines for maximum disorientation? Perhaps you’re just still baffled by the Coal Mine’s magical ability to consistently present professional calibre work with an indie mindset (and, in this case, a last minute venue crisis that displaced The River to a random Danforth storefront). Whatever the reason, something about The River just feels off, but that feeling is purposeful so it’s really actually on.