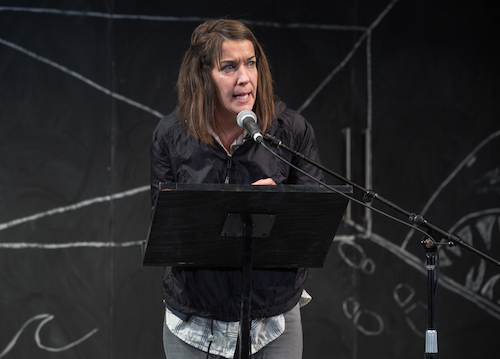 A New Enemy of the People

An Enemy of the People was originally an Ibsen play that has been translated by Maria Milisavljevic and adapted by Florian Borchmeyer then staged by Tarragon artistic director Richard Rose with a distinctly Canadian political slant and is now being remounted with mostly new actors.

The plot is so incredibly relevant to our current politics that it’s hard to believe this play was originally written in 1882. The plot centers on two siblings engaged in conflict over the town’s latest project: healing baths that draw tourism to the town and are able to stimulate the town’s suffering economy. When Dr. Stockmann discovers the baths are polluted, the mayor, the doctor’s brother, brings all his political weight to try to bury that fact.

The play might have been set in Europe over a century ago, but the same conflict has been playing out on our own political stage as Stephen Harper (until last night!) continued to execute such sinister moves as discarding libraries, firing scientists, and denying the severity of climate change. His political agenda is to curate the truth – something that politics is very good at doing, but any scientist knows is a foolish game. (Just ask David Suzuki.) As the narrative progresses, those originally on Dr. Stockmann’s side – the younger members of the town, the newspaper editors – eventually get bullied by the mayor to the point where they give in and instead of running the article about the baths being poisoned, run the mayor’s statement assuring everyone that everything is fine. We don’t have to look much farther than our own national newspapers this week to see that Ibsen’s plot is unnervingly accurate.

The play was originally about two brothers but what is most striking about this remount of last year’s Tarragon production is the casting of Laura Condlln as Dr. Tommy (Thomesina) Stockmann. Rose also cast Rick Robert as the mayor, and then dressed him up to look like a slightly taller, thinner Stephen Harper – complete with iconic haircut and blue tie. If the play was already relevant to Canadian politics, this casting underlines that even more so, by accentuating the difference of privilege and power. The mayor pretends to have the town’s interests at heart, but in fact all he stands for is a bottom line. And the more that the mayor bullies his sister, the more adamant Tommy gets. In one of the final scenes of the play she is ranting from a podium at a town hall meeting – a move in which she is easily cast as ‘hysterical’ and ‘emotional’ instead of what she is: the most fully rational person in the room. She is speaking truth to power, but she is easily jeered and undermined by the powerful men surrounding her.

This production comes at an appropriate moment in Canadian politics– one in which the stakes are high. This piece seems to be responding to the real struggle to speak truth to power, and the capacity of politics to absorb almost any truth and spin it into jargon and jingoism – something that became appallingly evident during the town hall scene where the audience was invited to participate in a section of the show improvised by the actors.

And yet. This production is trying to criticize a political system that is, at best, capable of hitting overly simplistic notes. What’s needed in response is not more simplicity, but nuance and sophistication. I am deeply sympathetic to what this production was attempting, but I found the execution somewhat wanting.

The initial confrontation between the two siblings is a scene that needs more nuance than it got here. Within a minute it had escalated to a screaming match that hit one note for what felt like five or ten minutes. The scene at the newspaper office also disappointing when the editor and the writers conceded very quickly and unproblematically to the mayor’s demands. There seems to be very little internal conflict exhibited by the characters. And then at the town hall, Tommy goes on a fast-paced rant about the state of politics – too fast paced to properly follow, and hitting one note again and again, something which really undercut what might have been a more interesting scene.

Tommy’s personal struggle is probably to most nuanced, but it gets drowned out by the lack of complexity surrounding her. The actors didn’t seem to have entirely sunk into their roles – something that might be due to a lack of rehearsal time for the remount and will hopefully be remedied throughout the run.

Despite my disappointment, the production has some dazzling moments. The opening sequence in which Lyon Smith plays an acoustic version of ‘Crazy’ was one of the best opening sequences I’ve seen in a long time. The subsequent band practice is excellent, as are the recurring musical themes throughout the show. The set is also fantastic. The walls are chalkboards, on which various actors signify scene changes and on which Tommy draws chemical compounds that seem to represent her emotions more than actual chemistry. Two thirds through the show there is an amazing set change when the actors come out on stage with chalk-paint and rollers, and paint haphazardly over the chalkboard graffiti. The resulting effect is reflective of Tommy’s situation: distorted and ugly.

Overall, this is an important piece, and a nice reminder that in 150 years, science and politics still haven’t resolved their fraught relationship. What that means for us remains to be seen. Let’s just hope that this production might actually help inspire some real conversation, and concrete action.