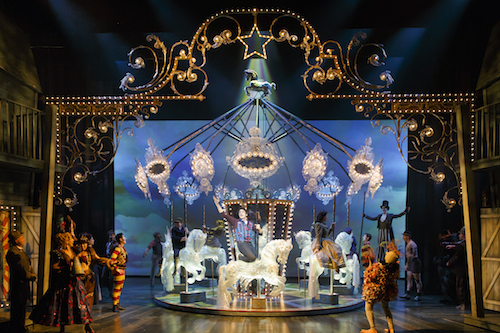 Warning: this is a bad one. I encourage you to just not contemplate going to see Carousel. Read my reviews (and see the productions) of Sound of Music, Oedipus Rex, Love’s Labour’s Lost or (ideally) The Last Wife instead.

Is this the single most ridiculously terrible production I’ve reviewed on any stage at any budget level so far this year? Honestly, it actually might be. I’m trying to think of anything else that so perfectly melded offensive, outdated material with awkward, forced performances and cheesy, simplistic direction and unappealing, uninventive design. I’m so tired of criticizing Stratford for bad programming and uninventive approaches to said badly programmed material but Carousel really was the limit. If you would like to read more about this terrible production I literally had to keep myself from intermittently laughing at and yelling at, I encourage you to read anyone else’s review because I don’t want to pick it apart anymore. Instead, let’s pick apart the larger trend that brought us this monstrosity.

Including the already announced 2016 season, Stratford has produced only one musical (Wanderlust) written after 1980. In 2015, they couldn’t even put in the effort to find two musicals not written by the same people (Rodgers & Hammerstein). There are some truly brilliant pieces in the musical theatre canon; pieces that would bring in new audiences and challenge directors (in inspiring ways, not “how do I fix Carousel?” ways) and give meaty work to extraordinary performers like Alana Hibbert (whose Nettie Fowler is the one truly standout character in this production), Sean Alexander Hauk (the adorable and golden-voiced actor who played the overlooked Enoch Snow), Jacqueline Burtney (whose wonderful dance performance as Louise in the second act was a much-needed highlight) and Marcus Nance (a killer singer who was given the surely very enriching opportunity to play a character named “Heavenly Friend”). If someone can explain the Stratford musical programming choices to me, please do, because it looks like the powers that be just don’t know what’s out there.