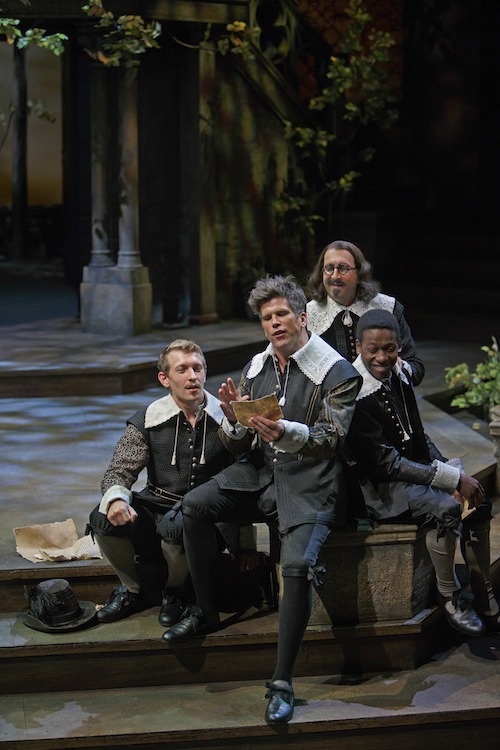 Of the many “just do the play” attempts at Shakespeare this season on the Stratford mainstage, director John Caird comes closest to presenting an incarnation of true interest. Patrick Clark’s overly pretty design traps the actors and distracts the audience and a few casting missteps drag the affair down but, armed with arguably the most flawed text of the mainstage trio, Caird manages to provide the most delight.

Refreshing multiculturalism and a loose approach to the text breathe new life into the play, making room for fun, unexpected beats like Thomas Olajide’s hilarious sideeye in response to Andrew Robinson’s sweet Longaville rhapsodizing that “black is the badge of hell”. Josue Laboucane appears to be having a ball as Costard and, in the process, makes him stand out more than in your average production and a few extra laughs (though not enough) are pulled from the usually forgettable Moth in the casting of precocious 12-year-old Gabriel Long. I’m still longing for the day someone manages to humanize the absurd Don Adriano de Armado with some innovative subtlety instead of leaning into the absurdity but, if absurd is what we’re going with, Juan Chioran’s outlandish performance is right on-point. It helps that he’s flanked by charming musician/singers Josh Johnston and Shruti Kothari performing catchy original songs by composer Josh Schmidt (though I will say that his underscoring of some of the more intense scenes feels too much like emotional instructions for the audience).

Among the lovers who make up the heart of the story, the balance of interest is completely out of whack. The men, perhaps with the exception of Sanjay Talwar’s stiff Ferdinand, are a complete joy to watch. Led by a wry and fantastically irreverent Mike Shara, the foursome whose school-over-skirts oath forms the basis of the play are energetic, goofy and sweet- all must-have qualities if such dumb plotpoints as “attend a dance dressed as crazy Russians” are going to fly. They take their love seriously (most notable in Shara’s beautifully felt “lose our oaths to keep ourselves” speech, in my opinion the highpoint of Shakespeare’s text) but are rarely marred by taking themselves too seriously.

The women, in contrast, are a dreary lot. Ruby Joy has all the gravitas and natural elegance the Princess of France requires but one gets the sense that she honestly would just prefer to get her land negotiation with Navarre over with so she can return to her ailing father undeterred by the silly advances of distracted boys. This seriousness is furthered by the fact that her light and bright sidekick Rosaline is hopelessly miscast. Though I’m delighted by the new textual levels discovered by casting a black actress as Rosaline, Sarah Afful is a much more natural dramatic actress than comedic, her grounded intensity failing to complement Shara’s joyful Berowne or contrast Joy’s serious Princess. Meanwhile, the stilted Tiffany Claire Martin, who has very few lines as Katherine, is robbed of her one real spotlight moment- a fight with Rosaline who insists on making light of a tragic memory- because Afful’s Rosaline doesn’t appear to make light of much of anything. Interestingly, Afful’s understudy is Ijeoma Emesowum, whose Maria is the one particularly fun presence among the dull women.

John Caird hasn’t moved mountains with this production but he has brought life to it, which is sadly not something that can be taken for granted. A few elements just don’t gel (the casting of the women, some slow pacing issues) but, on the whole, there’s a lot to love in this Love’s Labour’s, a conventional production unafraid of the occasional unconventional moment of discovery.