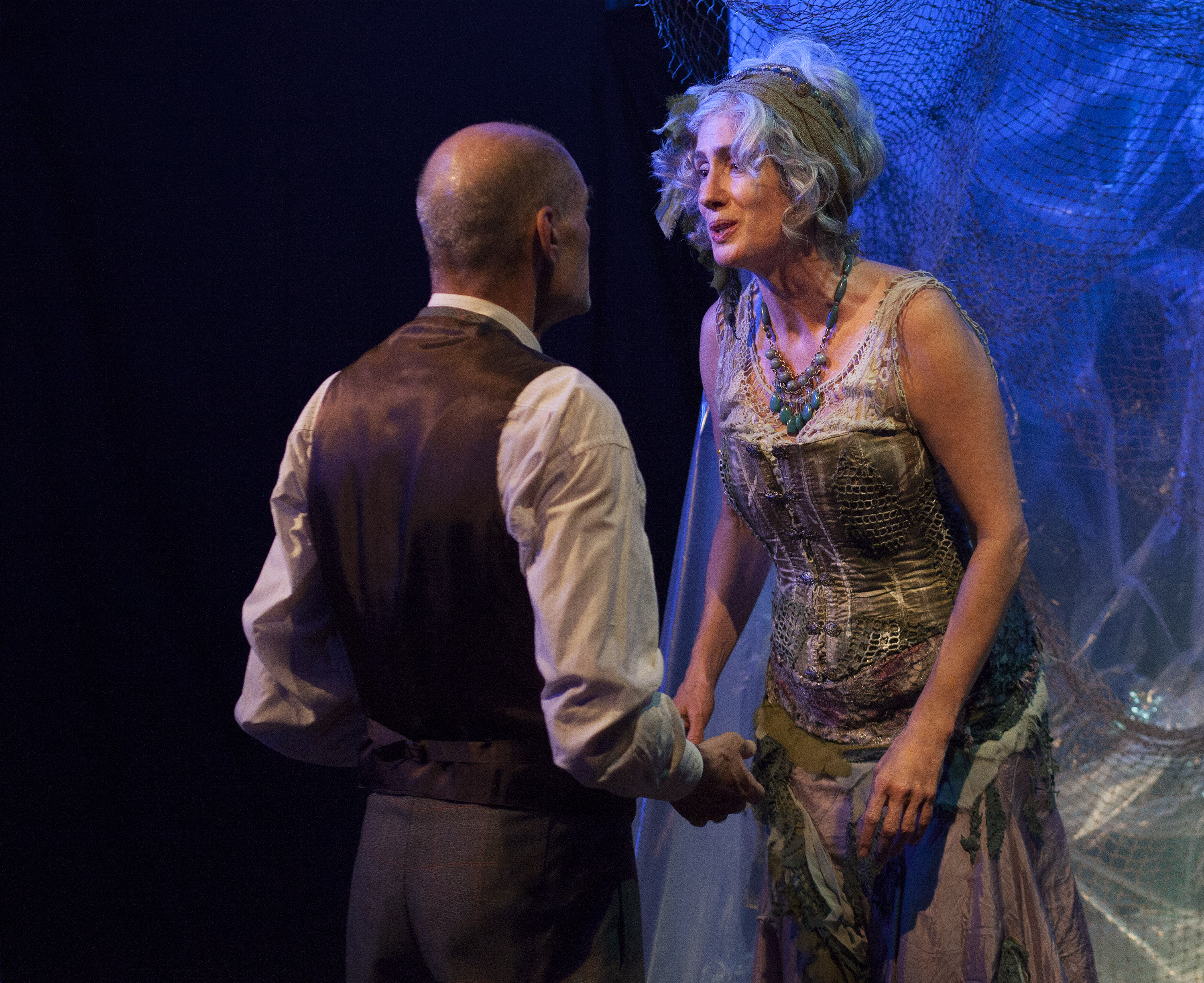 The Mermaid Collective DIVEs (but not too deep)

After finding my way through the thick black curtain that marked the entrance to the Array Space theatre, I found myself in a beautiful, intimate world. A long dining table covered in academic books stood at the center of the candle-lit room. Smaller chairs and tables peppered the walls. A small bar stood in the corner, selling drinks to the audience before the show. Blue and green lights filled out the candlelight. The space felt somewhere between an underground (underwater?) jazz club and dinner theatre.

The underwater effect, of course, is intentional. Dive has been freely adapted by Richard Sanger from the original story (“Lighea”) written by Giuseppe Tomasi di Lampedusa. The play begins with Paolo, who gets dumped by his two girlfriends (when they discover he’s been cheating on both of them) and who consoles himself in a local bar where he meets Rosario, an aging Greek professor. They befriend each other, though Rosario postures for the first several conversations, lecturing to Paolo about life and women. Rosario eventually confesses that he’s lived celibate almost his entire life, because he never got over his first love and lover, a mermaid named Lighea who he encountered while living on a beach one summer in his youth. After a heated affair, Lighea was forced back to the sea by a violent storm.

Yet despite the fairly straightforward plotline, I was left feeling unsure of what the play was about, exactly. An old man looking to pass on an inheritance? Well, maybe. But what kind of inheritance is this? Certainly, Rosario took inspiration from Lighea, and he might want to pass on that kind of reverence to Paolo, who treats women as mere commodities. But considering Rosario’s behaviour towards women, it’s not really obvious what kind of inspiration this is, or if Paolo takes it up, or even if such an experience was erotic inspiration for Rosario, or intellectual, or perhaps a combination of both. Either way, she seems to represent something outside herself, in the way that first love affairs can, and it isn’t clear if Rosario is holding out for Lighea herself, or something she represents.

Matthew Gouveia is endearing as Paolo, and Earl Pastko makes for a decent professor, though I found myself dissatisfied with both characters, and I’m unsure of why. The dialogue is good, and there seemed to be levels of emotion and irony that were not brought out really by the direction nor the acting. Why does Paolo admire this man? Is he searching for answers? He doesn’t seem to be. And Rosario is an intelligent, passionate man who seems to need to pass his legacy on, but I didn’t get a robust sense of that need from this production. A lot of the dialogue centers awkwardly on the men speaking about women, about whom it becomes excruciatingly obvious neither character knows very much. When Rosario finally tells Paolo of his love affair with Lighea, I realized that this was part of his motivation all along – to confess his story, to have it heard, to figure out what such an affair meant for him. But the actual confession feels a bit like it comes out of nowhere, and it was unclear to me what action drove him to confess this story, to Paolo, in that moment.

Finally, Fides Krucker plays a series of female characters that the men encounter, from Paolo’s girlfriend, a maid, a Mussolini supporter, and finally Lighea. Most of these women are either disparaged or condescended to during the production, with the exception of Lighea, the final character. Krucker brings her amazingly versatile vocal skills to bear on each character, and is the most mesmerizing part of the entire production. Her vocal range is both intense and sensual, and it fills out much of the plays ambience, setting different moods from playful to terrifying to erotic, and seducing the audience. Any problems I had with the narrative were redeemed, for me, in the experience of hearing this particular siren’s song.