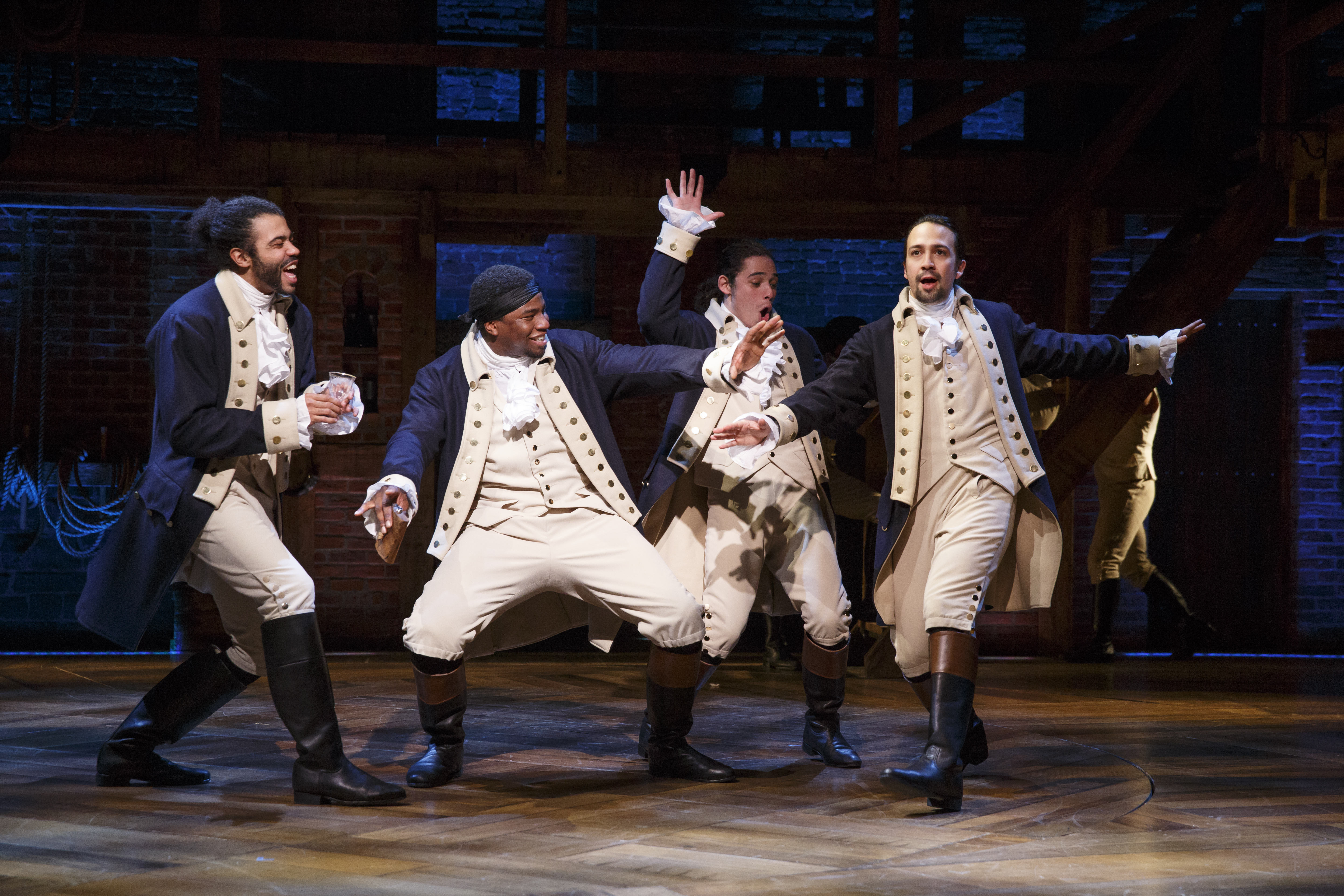 Who tells your story?

For generations to come, Alexander Hamilton can be thankful that Lin-Manuel Miranda chose to tell his in the new musical Hamilton, inspired by Ron Chernow’s biography on the former Treasury Secretary, which Miranda picked up to read on vacation back in 2008.1 Miranda’s hip-hop charged show integrates modern sound and style with delightfully intelligent turn of phrase, resulting in a generation-defining musical unlike anything previously seen on a Broadway stage.

Hamilton is a historical tale told through a modern lens. The show recounts the life of one of America’s Founding Fathers, who is often remembered for two things: his time serving as the first Secretary of the Treasury and his demise at the hands of Vice President Aaron Burr in a duel. That is where Hamilton begins – in the hands of Aaron Burr (portrayed by Leslie Odom, Jr.) as the narrator introducing the world to “a bastard, orphan, son of a whore” who would, through community good will, immigrate to the United States, educate himself, and place himself at the epicenter of a revolution, shaping history.

Lin-Manuel Miranda is remarkably and eloquently thorough in his overview of Hamilton’s life, depicting his time as General Washington’s aide during the revolution and his tenacious leadership at the battle of Yorktown, presenting Hamilton’s courtship of Eliza Schuyler (as well as his character-damaging affair with Maria Reynolds), and representing both his monumental efforts in support of the new constitution (including penning most of the Federalist papers) and his political battles as Treasury Secretary when he tried to establish a national bank. Throughout the narrative, Miranda also builds out the long and complicated relationship between the protagonist and the man who shot him, giving considerable stage time to history’s villain.

If that was all that Miranda managed to do with his narrative, it would be an impressive feat. Yet, Miranda acknowledges far more in his tale: Hamilton’s story is inextricably linked with many others and it provides a unique mechanism through which to explore those stories too. For example, to Miranda’s credit, the show ends not with Hamilton’s death but with an aside about Hamilton’s wife, Eliza, who spent her long life after Hamilton’s death championing countless social causes and founding the first private orphanage in New York. Moreover, it was Eliza and her sister Angelica who defended Hamilton’s legacy, ensuring that their favorable impression of him and his contributions would be the story recorded in history.

Additionally, while Hamilton may be the protagonist. Miranda goes to great lengths to tell the story of someone who history often recalls as simply a murderer. Miranda’s vision of Aaron Burr is that of an energetic, ambitious, and educated young man who, after years of serving his country nearly in parallel with Hamilton, saw his political dreams destroyed by Hamilton’s endorsement of Thomas Jefferson for president. Acquaintances, colleagues, and political counterparts – Burr and Hamilton were not archenemies.2 In fact, sharing a zealous ambition for politics, a career in law, a support of the American revolution, and the responsibilities of fatherhood, Burr and Hamilton had more in common than history textbooks might suggest. Miranda humanizes Burr but the ending of the story remains unchanged: Miranda suggests that Hamilton, in his last few seconds, took the moral high ground and intentionally failed to shoot Burr while Burr aimed true and struck his target, ending the duel.3

Miranda’s book may be compelling, but a musical with a strong book and no accompaniment in the form of lyrics and orchestrations is, well, a play.4 Miranda’s clear vision of his narrative, his understanding of his subject’s passions, motivations, and desires, his joy for both classic musical theatre tunes and hip-hop, and his exemplary gift for poetic prose combine in Hamilton to produce one of the most singular musical compositions ever seen on an American stage. Miranda is as adept at writing hip-hop and rap as he is at composing traditional musical numbers and, in Hamilton, he draws from all three styles (as well as countless others) to give the American revolution a beat and to express the soul of a nation (and all those who inhabit it). Noteworthy numbers include “My Shot”, an anthem not quickly forgotten5 that highlights Hamilton’s personal motivations and “The Room Where It Happens” that highlights those of Aaron Burr, “The Schuler Sisters” and “Helpless” which feature the female leads singing about far more than just their love lives, and the subdued ballads “Dear Theodosia” and “One Last Time” which are pleasant breaks from the high-tempo songs that define the rest of the production. It is rare to find a musical set that is so well crafted in its totality.

Although Miranda deserves the praise heaped upon him, the creative team for Hamilton is much larger than a single man, and this team is replete with talent. Many of the creative choices are inspired in their simplicity. David Korins’ set design is both elegant and unobtrusive, with wooden structures surrounding the space and very little to fill the middle of the room. Howell Binkley’s lighting design captures the mood and pace of the scenes – striking a successful high note during the climatic duel between Hamilton and Burr. Much like the set, Paul Tazewell’s costume design evokes a sense of “period piece” while the understated design of the costumes conveys a chic modernity.

Then there is the movement. Never in recent memory has the staging and choreography of a show been so entrancing. Director Thomas Kail’s achieves much of his staging success through the use of a turntable. A double turntable, actually. Coupled with Andy Blankenbuehler’s exquisite choreography, in which every step appears laced with purpose and power, the turntable brings a delicate fluidity to many sequences and prevents the on-stage action from stalling.

Hamilton is not devoid of acting talent either. Easily one on the most diverse casts on Broadway, the ensemble of Hamilton merits recognition for the unity they display on stage. Every single performer is both independently striking and adept at fading into the background. Among the leads, Leslie Odom, Jr. stands out as the infamous Burr. Odom’s vocals are terrific – pure and emotion-laden. Daveed Diggs charms as the idiosyncratic Marquis de Lafayette/Thomas Jefferson with an enviable amount of energy and a nice command of Miranda’s rhymes. Jonathan Groff draws laughs from the audience each and every time that he appears on stage – even the physicality that he brings to the role of King George is hilarious. Schuyler sisters Renée Elise Goldsberry and Phillipa Soo are both bold performers and soulful singers. Then there is Miranda. It is apparent that Miranda has respect for his creation. In the title role, he exhibits a level of familiarity with Hamilton and conveys that connection in his performance. While making art to imitate life, Miranda has put a bit of himself into the art – for which we should all be grateful.

Alexander Hamilton may soon lose his place on the $10 bill, but Lin-Manuel Miranda has ensured with Hamilton that he will not soon lose his place in cultural memory. So, take a cue from Aaron Burr and do whatever you can to be “in the room where it happens” because there is nothing quite like seeing a new American musical that embodies the history and heart of the country, as told by a cast and creative team that reflects the breadth of diversity in it.6

1 Which begs the question – what book did Miranda almost pick up instead? 2008 non-fiction best sellers included Stephen Colbert’s I Am America (And So Can You!) and Jerome Corsi’s The Obama Nation: Leftist Politics and the Cult of Personality. Bestselling fiction included three James Patterson novels and a Nicholas Sparks venture. Multiverse theory suggests that Lin-Manuel Miranda is somewhere in another dimension performing a show inspired by Stephanie Meyer’s alien romance novel….

2 Although, Burr was not, by any stretch of the imagination, a saint.

3 This supposition, while adopted by Chernow, is not universally accepted as fact.

5 I have been singing this song for months. Whether it is the aspirational attitude of the song, the undeniably catchy beat, or the irony of the sentiment (as Miranda’s Hamilton does throw away his final shot in the duel with Burr), the song is an earworm.

6 A good friend went to see Hamilton with me, and she had her own observations: “This was a fantastic show, but don’t take my word for it ([and don’t take her word for it either]).  Theresa Perkins has seen countless shows and seen many of them numerous times. It takes a lot to keep her attention. To date she has seen Hamilton no less than 3 times (and will be seeing it again in the fall).  I was lucky enough to see this show with her on her third go around and the expression on her face throughout the entire show was one of utter joy. There is no higher praise for a musical than that. Do not miss this show!”