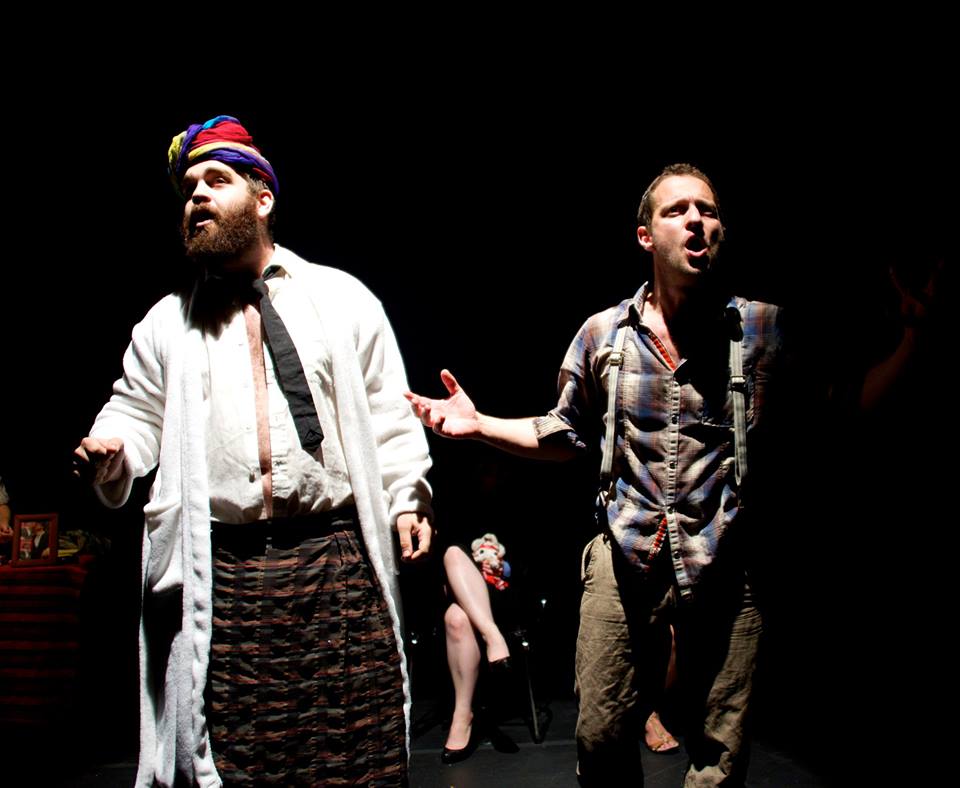 Let’s Start a Country! (B+)
This show is a fun, interactive piece in which Gerard Harris and Al Lafrance build a new micro-country with their audience. Part civics lesson, part parody, you get to name your country, choose a flag, construct basic laws, and eventually build a religion. The technical elements are a little rough; it’s so easy to shoot HD videos now with decent sound quality, that there’s no excuses anymore. In fact, the best moments of the show made full use of the performers, rather than the tech, such as when Lafrance offers news updates as Manly Peterbridge or when Harris institutes a Minister of Yesmanship to help him move the show along with authority. Both performers are sharp and the concept is witty, but more precision and a faster pace would really bring it to the next level. A perfect choice for those who love audience participation!

Beginagame (B+)
Beginagame was one of the more thought-provoking pieces I had the chance to see at this year’s Fringe. Produced by Passing Through Theatre, a new company formed by recent University of Ottawa graduates, the piece examines how our society mishandles the violence enacted upon Indigenous women through the experience of a young woman who has witnessed it and, for a variety of reasons, did nothing. I am always excited to see Fringe shows with a larger goal than pure entertainment and this was certainly an ambitious project. Through a grotesque game show, hosted by Lily Sutherland, Erin Morgan’s Misha relives the memories from her childhood of a neighbour who was violently murdered. Misha knew details that could have solved the case, but no one was interested in listening to a child and no one was particularly interested in solving the case. Sutherland’s performance as the host was grounded and clever, but the pacing of the game show scenes occasionally lagged and they became repetitive, which stifled the momentum of the show. I sincerely hope they continue to work on this piece and I am certain that we will see more from these talented performers in future. A tighter script and clearer narrative arc would have helped them a great deal.

Klondyke: Stand Up Straight from the Yukon (B)
Jenny Hamilton’s Klondyke is exactly what its title suggests. Hamilton is a solid and irreverent comedian, addressing topics like quitting smoking and racism head on. She goes a little blue, which is fine by me, but I think her show would have been much better suited to a comedy club than the Tarragon Mainspace. At the very least, a smaller venue would have helped her considerably. Unfortunately, stand up comedy tends to get dwarfed in the larger theatre spaces without a large audience to support it. I hope Toronto gets the chance to host Hamilton again in a more auspicious setting.

Sloanliness (B)
Dan Hershfield’s one-man show about meeting his hero, Chris Murphy of Sloan, is an easy, light-hearted piece. Hershfield was working aboard a Second City cruise ship when the chance to meet Murphy came around in the form of a floating music festival organized by the Barenaked Ladies. The piece delves into his neuroses as he relives the anxiety and pressure of meeting one’s hero face-to-face, with the pleasant twist that Murphy actually sounds like a nice guy. It’s a simple premise executed simply, but I’m not sure there is enough depth here to warrant a show. I was hoping Hershfield might delve into our obsession with celebrities or his connection to Sloan’s music, but it stayed on the surface level for me. Hershfield doesn’t seem changed by the experience, he just has a good story to tell and he does tell it well.