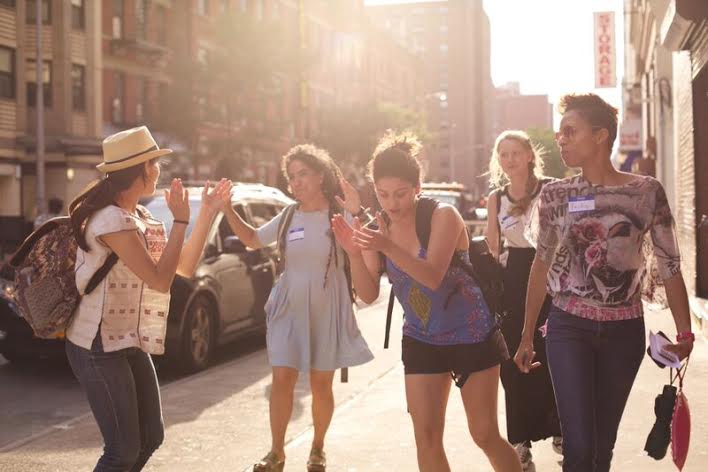 On a sweltering afternoon this past weekend in Harlem, Marcus Garvey Park was pulsing with activity as families scurried across the dry grass, couples lounged on benches, and the shouts of children permeated the breezy air from the public pool. It was on this neighborhood stage, just blocks from the historic Apollo theatre, that PopUP Theatrics set its new theatrical production Broken City: Harlem, in partnership with Rhymes Over Beats. Broken City: Harlem features five different plays set in and around Marcus Garvey Park that integrate the vibrancy of the Harlem community with interactive storytelling to produce an enjoyable immersive community theatre experience.

Each approximately an hour in length, I attended two of the five plays – Broken Spell and Broken Trail. Broken Trail began at Artist & Craftsman Supply under the auspices that the audience was taking an art class. We were quickly introduced to a quirky girl named “Cake” and sent out onto 125th street to identify a thing of beauty that we could capture as artists. Along the way, we were introduced to Sister Sita who preached the gospel of her new church – the Church of Tell-The-Truth-To-My-Face -which was borne out of her unfortunate interactions with employers in her position as a housekeeper. From there, we strolled through the city streets and were introduced to a number of “Harlem locals” who discussed the importance of truth in interaction, highlighted Harlem’s cultural and artistic identity, and described the unfortunate effects that gentrification and development have had on Harlem’s multi-cultural social fabric. Differing significantly from Broken Trail, Broken Spell took place entirely on a picnic blanket in Marcus Garvey Park. An intimate play with only three actors (four, if you count the audience), Broken Spell opens with a girl and her fiancé overviewing their plan to pose as psychics in order to fool a clairvoyant into accepting them as roommates in her Harlem apartment, which has an absurdly low rent of $500 per month.* When the psychic arrives to meet the girls, she immediately demonstrates her very real fortune teller abilities and challenges the girls to display their powers. While one of the potential roommates flounders, her ditsy fiancé actually has a quasi-medium moment that reveals the psychic’s true purpose in taking this meeting – to re-connect with her ailing grandmother.

Broken City: Harlem celebrates the rich culture of Harlem and highlights the social issues in New York City that are destroying that culture. Of particular note is a discussion running throughout the show about the ever-increasing cost of rent in Harlem. As young professionals with expendable income move into Harlem (no longer able to afford the rent in Brooklyn), rents have steadily begun to rise, and long-time Harlem dwellers are being priced out of the area. In the past year alone, I have had multiple friends forced out of their Harlem homes because the price of rent has skyrocketed. Simultaneously, urban beauty is being turned into a sort of urban blight, and community gardens and other venues are being destroyed to accommodate more expensive housing. It is a problem that is plaguing many previously affordable communities.

There is something intrinsically interesting about site-specific theatre because it removes fiction from the confines of a safe, controlled environment (i.e., a theatre) and forces it onto the street where not all of the participants in the rouse are actors nor are the creators in control of the environment. As our audience traveled along the streets for Broken Trail, our progress was impeded by children playing on scooters, our space infringed upon by curious passersby, and our actions catalogued by families enjoying a nice summer day in the park. However, the cast and crew of Broken City: Harlem did a nice job improvising their way through the wild terrain and seemed quite at home on the bustling suburban streets.

For theatregoers like me who enjoy the anonymity that comes with sitting in a darkened theatre, the attention that accompanies immersive theatre like that of Broken City: Harlem is a bit unsettling. Audiences must have a willingness to play along. For this, I must applaud the cast of Broken City: Harlem, but especially the three actors in Broken Spell who had me as their sole audience member – while I enjoy watching performers, even in close proximity, I feel incredibly uncomfortable when asked to become part of the spectacle. To the credit of the cast and crew of Broken City: Harlem, they were prepared to accept my reticence and continue on with the show.

As a general matter, the ensemble of Broken City: Harlem is adept at improvisation and, as a whole, nicely represents of the diversity present in Harlem. Of special note is Sita Johnson who, as Sister Sita, comes across as the most authentic and comfortable in her role as an urban housekeeper turned community preacher with a “keep it real” mantra. Also, Danielle Click, Tayi Sanusi, and Caitlin Zoz are enthralling in Broken Spell. They captured my attention with their comedy, with their emotion, and with adept transformations of character.

*A mythical place in New York, not unlike Narnia. Actually, Narnia may be easier to find.