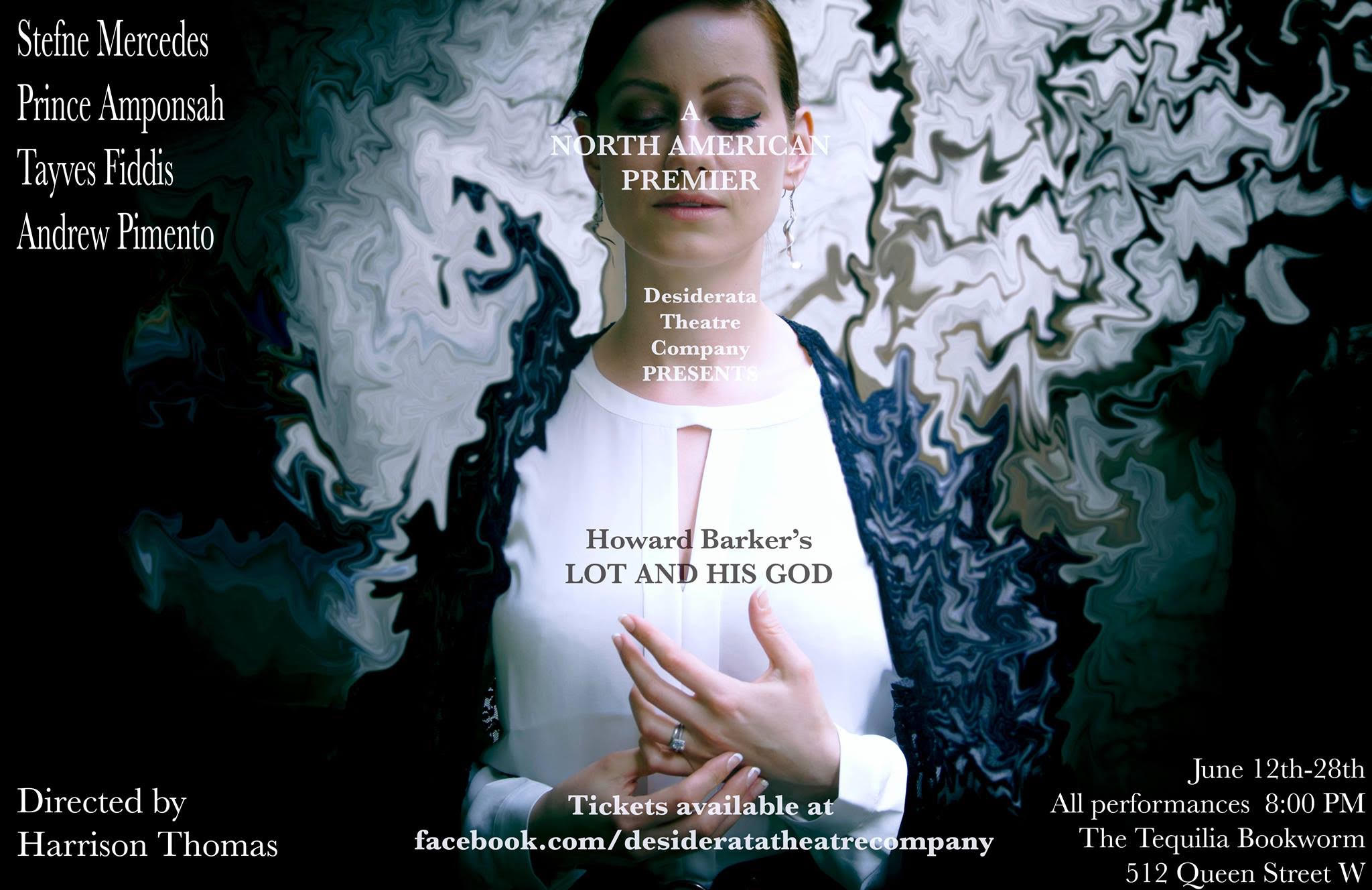 Lot and His God

A storm was supposed to be coming. Said forecast moved Desiderata Theatre Co’s production of Lot and His God from the Citizenry Cafe patio to its limited indoor space for one night only. Citizenry is too nice to really pass for the dilapidated Sodom cafe described in the text but, trapped inside with too many people in too small a space, surrounded by hipster rustic decor and exposed brick, breathing coffee grounds instead of oxygen, disbelief required just a little less suspension when an act of god was impending.

The storm never came. But inside Citizenry, Desiderata’s small cast of four captured and ran with that unique expectant energy, preceding the destruction of their biblical city with fire and brimstone of a more personal variety.

The action of Howard Barker’s tense one-act swirls around Sverdlosk, known simply as “Lot’s Wife” in the bible, famed for looking back at her burning home and thus being turned into a pillar of salt (#GodIsGood). Here we get to know her as more than a nameless metaphor though it’s a shame that, despite Stefne Mercedes’ sizzling portrayal, she’s ultimately not much more dimensional than as originally conceived. At least in the bible there’s some intriguing ambiguity about her motivations for looking back; Barker’s femme fatale version is most likely looking back in mourning for her shoe collection.

Though they really oughtn’t be, the men who surround Sverdlosk are far more interesting, judging her and fawning over her in equal measure, tangled up at the crossroads of righteousness, resentment, compassion and desire. Standing in stark contrast are Tayves Fiddis’ sincere and intellectual Lot and Prince Amponsah’s commanding Drogheda, both as superb in silent reactions as they are delivering the best of Barker’s poetic monologues. As Sverdlosk toys with the latter, the sexual tension flies off the charts, their relationship fuelled by simmering hatred and the thrill of the unknown. When she’s in the comforting arms of Lot, in contrast, there’s a mountain of affection and a poignant lack of heat.

Lot and His God marks the return to the stage for Amponsah after a 2012 fire left him with devastating burns and the loss of his right arm and left hand. Rather than ignore it, Amponsah and director Harrison Thomas bravely and insightfully harness the power of Amponsah’s tragedy to give the play’s angelic messenger an intriguing weight. This is no Gabriel, descended from heaven on feathery wings to bring glad tidings; Drogheda has been through it. He’s foretold of doom before, he’s been caught in its crosshairs; he’s hardened enough to torture a temperamental waiter (Andrew Pimento in a silent star turn) without batting an eye when the sight of such suffering brings Lot to his knees. There’s a survivor’s regality to Amponsah as he appears now, an almost otherworldly strength that can’t be faked and gives his Drogheda a power the role has surely never had before. The conflicted sadness, the powerhouse chemistry, the smooth-talking charm- these are things the George Brown-trained actor could always play and absolutely has not lost but it’s what he’s gained that makes this performance so special.

Lot and His God is a beautiful piece of theatre, big and small and rough and poetic all at the same time. Though the play’s central character is somehow overshadowed by the men in her orbit, the thrilling complexity captured by the three actors in those roles makes that somehow okay.

Lot and His God plays at Citizenry Cafe until June 28th. Get your tickets HERE.