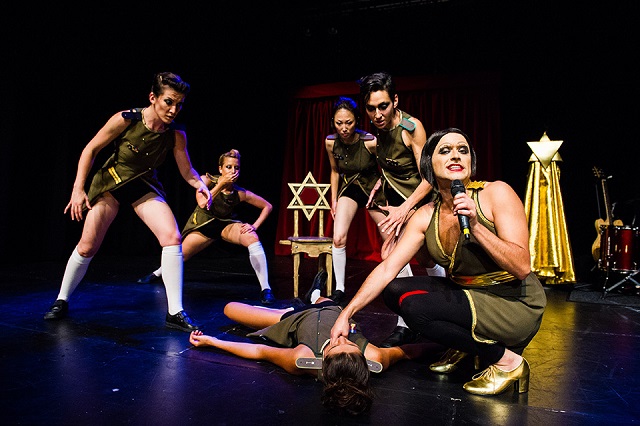 Ballad of the Burning Star, a Political Drag Musical

As I walked out of Ballad of the Burning Star Tuesday night at the Theatre Centre, I ran into a friend walking into another show (Burnish, I believe). When he asked what Ballad was about, I said, with a kind of syncopated energy: “well, it’s a devised theatre piece, but it’s also very movement based, like a dance almost— very lecoqian—and it’s also a drag show, and has this kind of funny-not-funny energy to it. And it’s a musical. Oh, and the drag queen is a liberal Israeli, so that’s really what it’s about.” While my upchuck response may easily be read as little more than glib, I find no other description quite as satisfying: Ballad of the Burning Star brings music, movement, dance, and humour together in a drag cabaret that explores the complexities of contemporary Israeli politics. It looks at Israeli culture and its contradictions, which it stages through an overtly performative lens, asking audiences to reflect again on Israel and identity politics, before taking a stance. As such, Ballad of the Burning Star offers no simple ‘answer’, but rather puts forward these formal and narrative complexities as precisely that: a mélange à many. But whatever it is, this dance-meets-musical-meets-dragshow-meets-comedy-routine-meets-political-art-meets-play, is a must see!

The show begins with the drag queen Star, played by Nir Paldi (who also writes and directs), sauntering through the red velvet curtains, dressed all in gold, singing “Shalome!” She tells us that Shalome means ‘peace’, but also ‘hello,’ but also ‘goodbye.’ As such, the goals of the show are set up in the first moment: we are looking at Israeli and Jewish culture and politics and all of their meanings, however complex and contradictory. Speaking/singing directly to the audience, Star sets the tone for the evening: light, playful, but with a political bite. As she introduces her army of chorus girls, the Starlettes (dressed and behaving quite deliberately like an army), she embarks on the tale of a young boy named Israel (the word play here, again, quite deliberate). As they tell the story of Israel growing up in an Israeli settlement, it begins to fall apart as Star interrupts the action to criticize and, dare I say, terrorize her Starlettes. What results is a complex play-within-a-play, which through its very form begins to mirror the world it attempts to understand. And as the narrative unravels, the curtains of verisimilitude are lifted, and we are asked to see our country, our religion, our culture, and ourselves, through critical eyes.

The most striking aspect of the show was the incredible movement work of the Starlettes. This ensemble of 5 women from different ethnicities and countries made up a powerhouse that combined the energy and sharpness of the 1920s chorus girl, with the physicality and intensity of contemporary dance. They illustrated every transitions and scene with mime and movements, demonstrating what incredible storytelling can done through the body. Other highlights were when Star broke the fourthwall to comment on the play or the actors in it. After one particularly emotive outburst from Mercilless Mirium (Amy Nostbakken), one of the starlettes, Star exclaimed “What are you doing? This isn’t a soap opera, this is a serious political piece!” These moments added to the play’s affective climax, and futher, pointed towards the difficulty of staging such stories. Similarly, Star occasionally had full on arguments with herself, speaking both sides of the Israel/Palestine debate in almost one breath, as the audience worked hard to catch up. But nothing was lost on us. We are followed every word, wondering how on earth it’s going to end. And we are left wondering still, as such politics are far from resolves.

What Theatre Ad Infinitum have created with Ballad of the Burning Star is not only a complex staging of the history of anti-Semitism, but also the Israel-Palestine debate. We are invited to wade into the issue with humour, love and energy. We’re allowed in through the performer’s incredible physicality, and in the moments of clown-like performativity. Ballad of the Burning Star has accomplished a rarity in theatre (let alone drag, musicals or ensemble work): it brings politics to the stage in an accessible way—they account for every angle, aware of their responsibility as performers, and conscious of the power and stereotypes implicit in representation. The more I think about it, the more I realize what an incredibly intelligent piece it is: how it draws links across Israeli culture, through the audience, to the performers and back again, until a complex web of religion, identity, history and oppression is revealed. And we are all a part of it. Ballad of the Burning Star attempts only to draw this web out—to pull back the wool over our eyes, and demonstrate contradictory politics at work. It exemplifies and how music, movement, theatre and drag might bring personal and political tensions to the forefront.