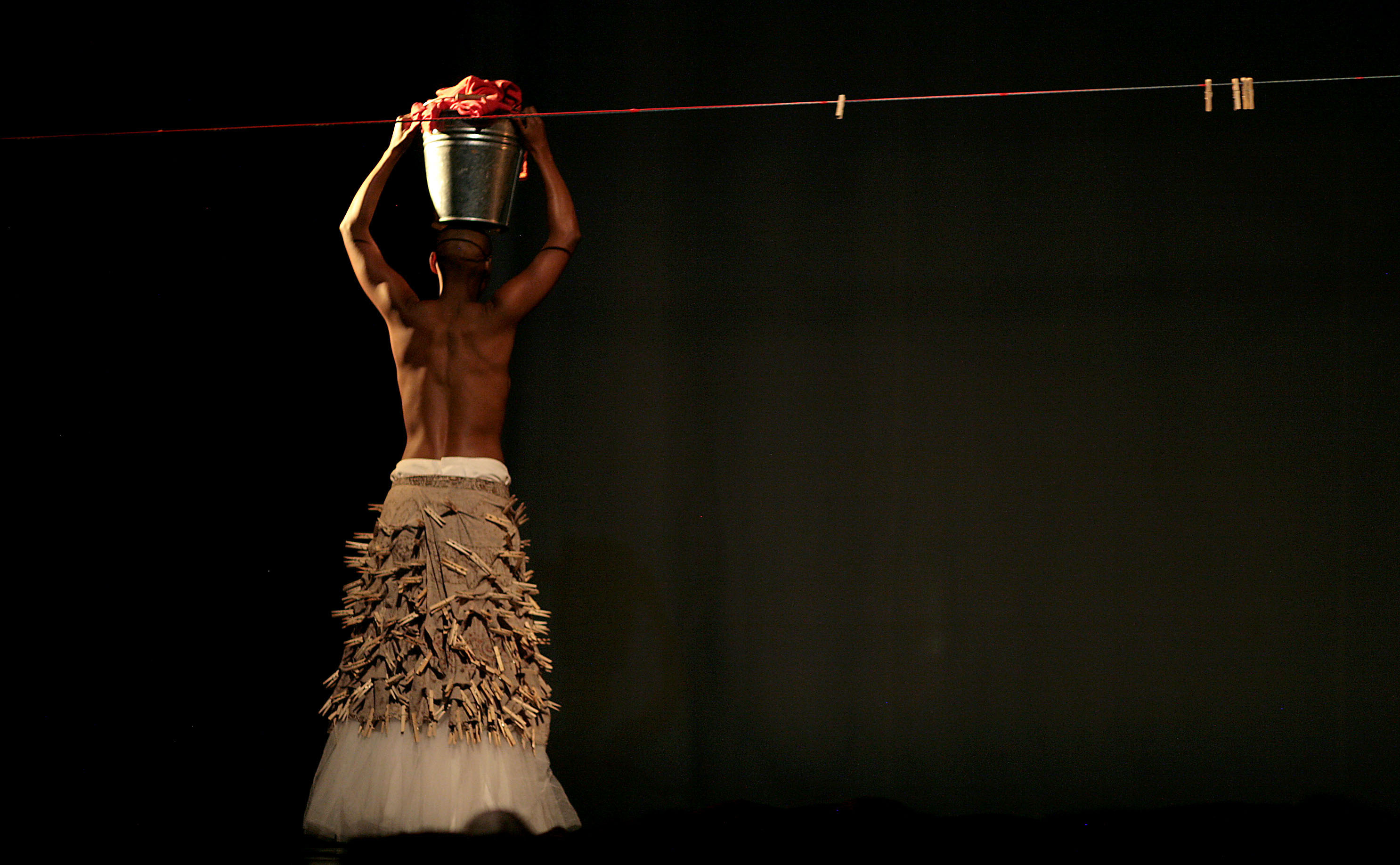 Hatched begins with an iconic image, Mamela Nyamza, topless and back to the audience in a long clothespin tutu, strong and statuesque, beautifully silhouetted by the artistry of lighting designer David Hlatshwayo. The dance begins with Nyamza couruing en point across the stage, her back still to the audience and still beautifully silhouetted, her clothes pin tutu moving and jangling around her. First to the right holding a tin washing bucket at her side, then across the stage to the left holding the tin bucket on top of her head, then with a pause to invoke weariness and effort through audible breaths, back across the stage balancing on top of her head a pile of red material—the items making up a young families laundry.

While Nyamza’s other contribution to the Canadian Stage Spotlight South Africa Festival, The Meal, depicted the complex embodied relationship of embracing, rejecting and living within a colonial heritage. Hatched is a more intimate story of the transformative nature of struggle and acceptance as a woman, mother, and artist. Nyamza does not make this comfortable to watch.

Created in 2008 when her son (Amkele Mandla) was eight years old, now close to 16, Mandla continues to join Nyamza on stage in this ever-evolving work. His changing role on stage testament to the ways that motherhood and the mother-child relationship are also ever evolving. While Mandla’s presence on stage is constant, it is Nyamza’s transformations that are the focus. Invoking the imagery of being consumed by, then emerging from, a cocoon, we get the sense that Nyamza’s transformation into motherhood, into being an openly queer women, into being a dance artist, is wrought with physical and emotional challenges and triumphs. Shaking and writhing with effort Nyamza emerges as if with a new body implanted with a new identity, like a fawn trying out new legs in new surroundings.

Fresh from the effort and sprawled on the floor she asks the audience, “does anyone have a cigarette?” when no one responds she suggest that maybe we are too healthy in Canada, “are there any South African’s in the crowd?” there are, but they won’t give her a cigarette either… “I have permission, please” she pleads. With no one willing to give her a cigarette she asks for a tissue instead, multiple people begin digging through their bags and pockets, she accepts a tissue from a man in the front row.

Not unlike The Meal, with its descriptive and embodied autobiographical storytelling, Hatched also presents an embodied autobiographical narrative. We watch Nyamza struggle through existential exhaustion broken up by moments of jubilation, not just one transformation but many. The final movement is a relief, Nyamza is celebrating and now we can too. She has taken us on a journey and we have all arrived on the other side.

**Choreographer and Performer Mamela Nyamza wished to have her final performance dedicated to anti-xenophobia.