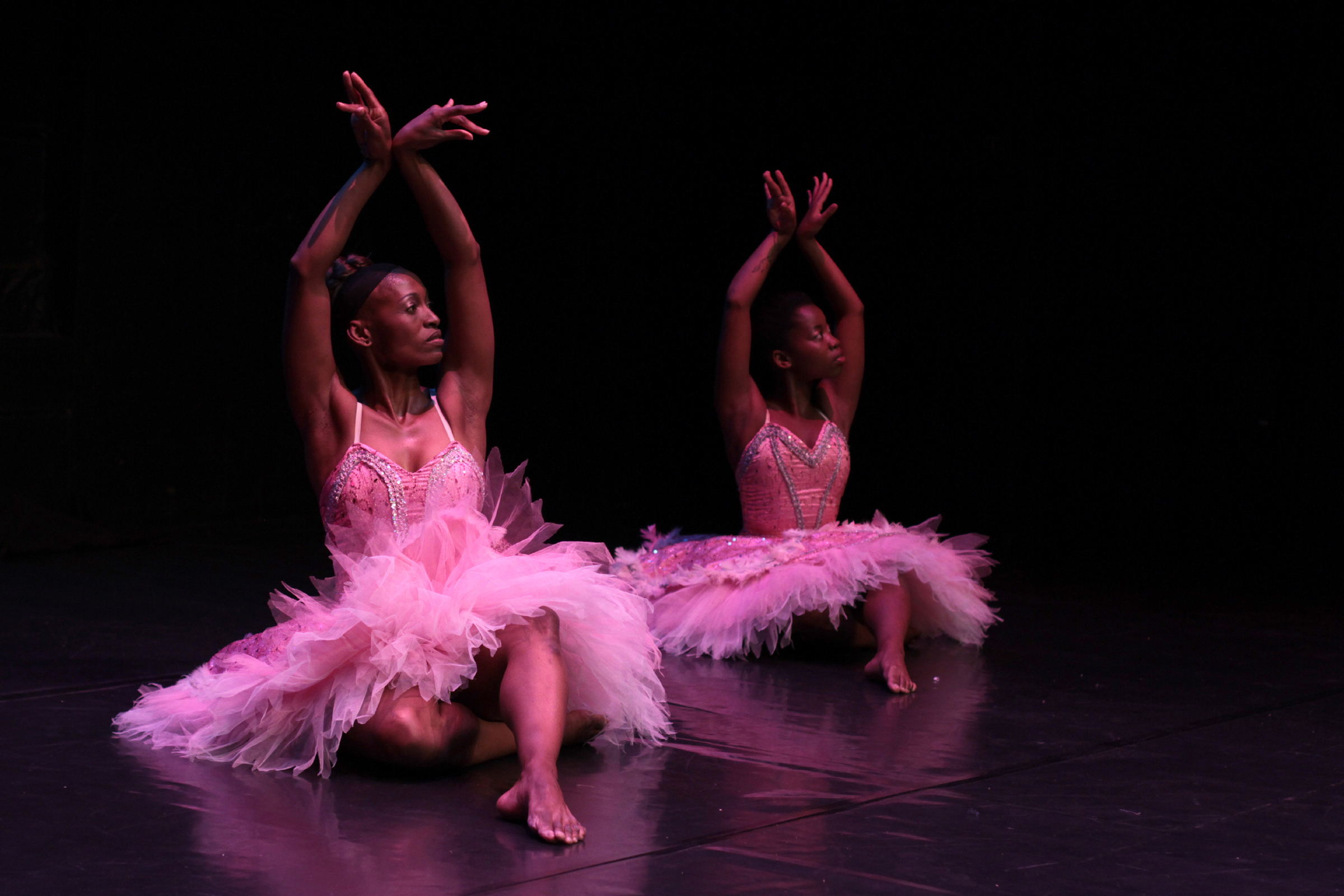 Nyamza is known for her autobiographical and uncompromising work, masterfully weaving personal stories while speaking to larger truths indicative of a South Africa still in transition.

The tone of the piece is set by Nyamza kneeling in front of a matronly white women, representing her first ballet teacher as a young girl living in the Gugulethu Township near Cape Town. There is a clear and loving bond between Nyamza and her teacher, performed by musician and storyteller Dinah Eppel. They mirror each other’s movements, swaying and conversing in Xhosa until with care they each gather their hair up high and twist it into a ballet bun. Eppel demonstrates with her long silky grey hair while Mamela imitates the action; she does not have the hair to actually pull up into a bun, that is until Eppel pulls a long braid out of her robes and pins it to the top of Nyamza’s head. She twists it and pins it in place while Nyamza squirms in discomfort receiving posture notes such as “shoulders down” and “back tall.”

These postural notes mark a shift early in the performance, while sitting and mirroring each other they conversed in Xhosa, when Eppel begins to suggest the postures of classical ballet, she switches to English and continues in English as she helps Mamela into a infantilizing pink tutu and begins instructing her through a classical ballet choreography that is reminiscent of Swan Lake.

We see here Nyamza transformed into an accomplished classically trained dancer who captivates with her technical precision. As she finishes this sequence a younger dancer enters from stage left (Kirsty Ndawo), calling out to Nyamza and also holding a pink tutu, which Nyamza helps her to put on in a similar way that Eppel helped her into her own. Nyamza then re-teaches the same choreography to Ndawo that she has just finished performing, thought this time the instruction is in Xhosa rather than english. Both dancers struggle to get their tutus to fit comfortably; pulling and rearranging the material over their bottoms is a theme recurrent throughout the piece. This discomfort and rearranging of their classical ballet attire is a poignant demonstration of Emyilin Claid’s evocative description of ballet’s disdain for bodies that do not conform: “up, up and away: chin up, tits up, eyes lifted, bum clenched, knees pulled up, stomach lifted, hair scraped back – fight, fight, fight against the falling expanse of the flesh”.

While the two continue in their classical dance instruction, there is a different type of movement that begins to break free from the form, that, much like Mamela’s lines of “I must not have a big bum,” begins to challenge accepted ballet structures. The movement is frenzied but brief, kept within the structure of the classical technique, until, that is, it can no longer be contained. The strict forms of ballet break down as the musically complex and athletic forms of Tswane dance rhythms take its place.

Nyamza and Ndawo deconstruct the classical form, performing the tensions between resistance and conformity in their bodies as the earlier recognizable Swan Lake is mocked and replaced by first an ostrich, then other bird forms (they also “flip us the bird” at one point). The performance culminates with a revision of Swan Lake’s Dying Swan, with both Nyamza and Ndawo alternating between Tswane and ballet dance forms. In the midst of this, with Nyamza carrying and cradling Ndawo, Ndawo begins to pull the pins holding Nyamza’s bun in place, flinging them one by one onto the stage until the bun and the braid are removed from Nyamza’s head.

The performance comes to a close with Nyamza burning impepho at the back of the stage, a ritual cleansing herb that both heals and invokes the ancestors. As the smoke and smell invades the audiences senses we are confronted by the lack of barrier between us and the performers. Much like when Nyamza earlier instructs Ndawo to “look at the audience, look at them, now smile, smile at them, are they smiling back?”, we are challenged to not be a passive audience but to be responsive to the new forms that have emerged.

On the surface this work could be read as simply a statement on the fraught relationship between black bodies and classical ballet; however, this is not just a story of black bodies and ballet, it is Mamela Nyamza’s story of her body and her relationship to dance and ballet. A relationship steeped in the tensions surrounding the transition of South Africa from an apartheid state to a democratic nation. The tensions between freedom and agency, conformity and expression that can be read in Nyamza’s work have larger parallels to a nation that continues to be in transition, reforming, reidentifying and reestablishing itself anew at levels personal, political, and societal.

The Meal: someone laboriously prepares it, someone else consumes it.