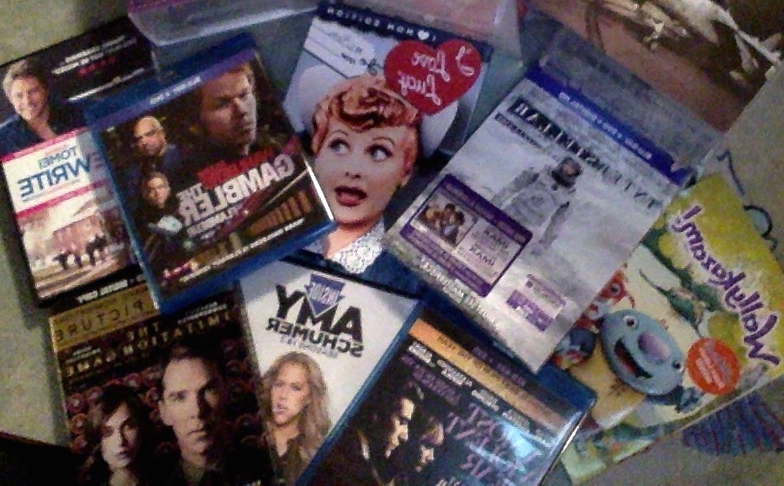 It’s time, once again, for the On DVD series featuring new releases from Paramount and Elevation Pictures.

The Imitation Game (Elevation Pictures, March 31)
The re-watch value on this Oscar-winning WWII thriller is high thanks to superb performances from the entire cast (led by Benedict Cumberbatch with a ton of key supporting turns, including Keira Knightley and Matthew Goode) but the film’s problematic structure and unenlightened interpretation of its historical inspiration become harder and harder to overlook under the microscope. A superficial “making-of” and severely self-congratulatory audio commentary don’t help matters. The Imitation Game is thoroughly enjoyable and definitely worth having on your shelf, as long as you don’t take it out too often.

Interstellar (Paramount Home Distribution, March 31)
The fist thing you need to know is that I hated Interstellar more than anything when I saw it in theatres. It’s nonsensical, badly structured, surprisingly condescending, and full of characters who never do anything human beings would do. The only good thing about Interstellar as a standalone film experience is that video message from Jessica Chastain that is our first introduction to her as a grown-up character (holy hell that woman is a marvel). All that said, I actually think that the $40 Blu-ray combo pack version of Interstellar is not a half-bad purchase (the $30 just-the-film DVD? Total rip-off on every level). Ignore the “collectible IMAX film cell” that comes with the combo pack because Interstellar will never be enough of a classic for that to be worth anything (we need better regulation on the word “collectible) but the incredible bevy of Special Features available on Blu-ray Disc 2 contains more interesting insight into the practical side of filmmaking than any home video set in recent memory (maybe since the Lord of the Rings discs; those were FANTASTIC). It’s a shame all that cool-looking work didn’t result in an actually watchable film.

The Rewrite (Elevation Pictures, April 7)
No argument can be made that this is a great movie but, if you like this sort of thing, you will like this movie; 100% guaranteed, it will not let you down. The dependable charm of Hugh Grant, the immense likeability of Marisa Tomei, JK Simmons(!), Allison Janney(!), writer/director Marc Lawrence’s thorough understanding of successful mainstream rom-com formula and wonderfully stubborn refusal to abandon said formula despite the fact that it hasn’t produced a hugely popular film since the early oughts. This is a movie for people who really love Two Weeks Notice but have seen it too many times to be able to sit through it again. It’s predictable, it’s cheesy, and it feels oh-so-good.

A Most Violent Year (Elevation Pictures, April 7)
When I was young and we used to go on family vacations to the beach, my mother would always warn us to beware of the tide. My brother and I were both strong kids, big for our age and excellent swimmers, so we rarely listened. Inevitably, a wave would come and we would be swept up into the undertow, pulled out further than we wanted to go no matter how hard we swam in the opposite direction. Set in one of the most violent years in the history of New York City (1981), A Most Violent Year is the tense and unrelenting story of essentially good man Abel Morales’ struggle against the tide. Writer/director JC Chandor subtly eschews standard cinematic climax/resolution structure in favour of a focused, steady march towards success and compromise, ending poignantly with the inevitable. A brutal climactic plot point underlines the tragedy by becoming an anti-climax through Abel’s judicious non-reaction. A slow, punishing, sublime piece of filmmaking with leading performances from Oscar Isaac and Jessica Chastain that are some of the most thrillingly nuanced and restrained of the year (note that this film was released in that suspiciously murky year-bridging time period that qualifies it for last year’s Oscars but next year’s My Cinema Awards; if we’re going with Oscar-qualifying severely limited release date, that makes this the second film of 2014 featuring the unspeakably brilliant David Oyelowo that was massively snubbed. Inexcusable). The DVD/Blu-Ray combo pack refreshingly features a slew of great Special Features on both discs (which is really rare; usually the DVD is fairly empty). A Must-Buy.

Inside Amy Schumer: Seasons 1 & 2 (Paramount Home Distribution, April 7)
The sketch comedy renaissance is brilliant and ground-breaking and essential but it’s also very male-dominated. But then there’s Amy freaking Schumer. This disc has about an hour of solid special features (cut sketches and extra stand-up plus a featurette) but sketch is great on DVD even without the extras because the re-watch value is great. Honestly, just throw this thing on the TV in the background of a party and make the wallflowers happier than anyone’s ever been.

Classic Complete Series Sets (Paramount Home Distribution, April 7 & 14)
This, to me, is the key product for the survival of DVD as a distribution method- the Complete Series. Watching a complete series on DVD combines the binge high of streaming with the thrill of the collectible item (dear Interstellar, see proper use of “collectible” aka “something worth having”). Here, in this tiny box, is 117 episodes of the generation-defining time capsule The Brady Bunch. Here is every single groundwork-laying episode of Matlock (there are 178 of them); the entirety of JAG (that’s 226 hour-long episodes, or ten years of long hours of hard work by hundreds of artists and technicians and, yes, even network suits). Here, in a box, is a complete thing; a massive artistic and commercial output; a giant piece of culture that you can just put on your shelf. It’s not in some abstract communal library for you to click on because you subscribe to something; this is yours. Complete Series box sets on DVD are one of my favourite things, of all the things.

I Love Lucy: I <3 Mom Edition (Paramount Home Distribution, April 28)
By the same token, Best-Of collections are also ace DVD purchases, especially for classic long-running series. Netflix is all about quantity, giving you access to everything; there’s very little curation involved (unless you count the algorithm that guesses you might like All Dogs Go To Heaven: The Series based on your interest in “Goofy Buddy TV Shows” *actual example from my account*). In contrast, a team of humans were at some point assembled by Paramount Home Distribution to watch all of I Love Lucy and determine which episodes would be great to watch with your mom (the built-in greeting card that comes with this surprisingly skimpy 4-episode set gives it away as a mother’s day money grab, but that doesn’t make these episodes less appropriately chosen by an actual team of humans). Your taste in I Love Lucy episodes is obviously subjective and the people who assemble Best-Of sets are obviously not critics but, still, for the same reasons it’s great to have a complete series on your shelf, for non-serialized shows, it’s great to have a Best-Of. Note: this is another thing I would put on in the background of a party because only really cool kids have classic TV on DVD, right?

Wallykazam! (Paramount Home Distribution, April 28)
Paramount is HUGE on the weird kids DVDs. This educational 4-pack is yet another example. Great because kids love to watch the same thing over and over again (four short segments on one DVD purchase can get you pretty far) but, really, what’s the point in owning this sort of thing (compared to, say, a Netflix Kids subscription)? Once they grow out of it (and they Will grow out of Wallykazam!, this is not like my much-watched, wildly beloved old puffycase copy of Mulan), you’re stuck with it, and it’s nearly impossible to get rid of unwanted DVDs these days.

The Gambler (Paramount Home Distribution, April 28)
Who’s the last actor in the world who should be playing an English professor? If your answer ended in the word Wahlburg, you would be correct. But the folks who made The Gambler decided that Marky Mark would be a good literary authority and they armed him with a pretty decent takedown of the idiotic Earl of Oxford theory so, right there, you’ve got a pretty weird movie going. The Gambler doesn’t know if it wants to be a slick thriller about a charming hero in over his head, a poignant morality tale about the dangerous allure of the dark side and the price of desperation (see also A Most Violent Year or, rather, see only A Most Violent Year), or a character piece about an unhappy but privileged intellectual on a lonely search for self acceptance. The Gambler is at least three bad movies all at once (not to mention a massive waste of the brilliant Brie Larson) but bizarrely it is a pretty decent movie about student athletes if you edit out the 95% of the movie that’s not a pretty decent movie about student athletes. The DVD is completely Special Features-free though the Blu-ray has some treats and it’s a combo pack so it all works out okay (except for the fact that the movie is bad).