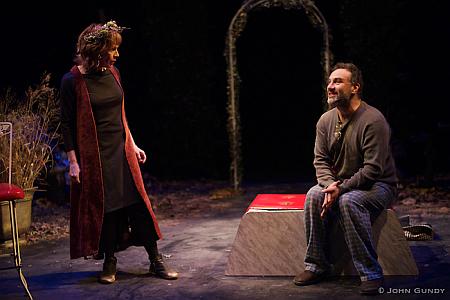 A Woman is Not a Secret

John Patrick Shanley’s A Woman is A Secret opened at the Theatre Centre last Friday to an enthusiastic audience. Though what brought audiences to their feet at the end of the show is not clear to me. For while A Woman is a Secret was beautifully staged, actors were bogged down by Shanley’s overly poetic and cliché language, leaving us with a play that was not only a little tired, but was problematically stereotypical.

A Woman is a Secret is composed of 6 vignettes that explore different relationships between men and women. We meet: a boyfriend and a girlfriend eating at an organic restaurant (and their sexy French waitress); a young man asking the town psychic to read his future; a stoic bartender and flirtatious patron navigating a very poetic pick up; a Polish, no-nonsense, soon-to-be divorced lady making a puzzle with a troubled millionaire; the newly married gold-digger arguing with her former lover; and a sick man, explaining how to make babies to the fairy who lives at the bottom of his garden. Between each scene, our faithful troubadour—called the Maestro in the program and played by the talented Matthew Barber—set the tone singing in the style of love icons, from Frank Sinatra to Elvis Presley. The play is bookend with Barber and cast singing, “You’re Nobody till Somebody Loves You.”

This might suggest that this play is about love. But this doesn’t seem to be the case. If it is, it’s a very narrow and stereotypical version of what that might be. In fact, a lack of focus seems to be the main issue with A Woman is a Secret. Not only are the major themes unclear to me (is it about love? Death? Sex? Heterosexual relationships?), but it is also unfocused in its form. A mix of realism, surrealism, poetry, song, and a meta-theatrics, it’s hard to say really what this play was trying to do. At its best, it was a sweet, thoughtful, at times beautifully poetic exploration of the human condition, and our desire to love and be loved. This was exemplified in the final scene between Martha Burns and Tony Nappo. This fantastically scene featured Burns as the banshee (fairy) that lives at the end of the garden. She has flown in through Nappo’s open window to find out how babies are made. The pair performed with great honesty, demonstrating to the audience, for the first time in the show, how to perform overly poetic lines or cliché scenarios without losing the audience. Their commitment to the scene, their energetic curiosity as characters, and their unapologetic belief in the magic they were a part of resulted in a sweet, heartwarming, and funny bit of theatre. Only Katie Swift, in her scene as the town ‘witch,’ came close to this, bringing an edge to the scene, and humanity to her character, that made her lines ring new/true in our ears.

At its worst, A Woman is a Secret was extremely cliché. The constant use of poetic language was distancing as an audience member, arresting our imaginations, and taking us out of the moment. We’ve heard this all before, I kept thinking. The worst was the drawn out metaphor of a moth caught in a spider web, in the seduction scene between the bartender Hank (Trent Pardy) and the patron Sparkle (Molly Flood). We get it. You’re a spider and you’re going to devour her. Why are you guys still talking about this—why is this metaphor still happening? The actors in this scene, and most of the others, through no fault of their own, left me with little more than rolling eyes.

It wasn’t all bad. Hanna Puley’s set design was beautiful. The stage was covered with autumn leaves and café chairs, with a garden archway upstage through which all the couples entered. This mix of the natural and the social—the garden and the coffee shop—was echoed thematically throughout the script. But to what end? Perhaps the play explores this social/natural dialectic across relationship themselves: men as social, women as natural. And yet, this narrative too has been done. Ad infinite. I felt like those guys in the Blair Witch Project yelling, “It’s the same river!” just wanting someone to kill me now, and end my suffering.

All that said, the main issue with this play—beyond it’s cliché script, and so-so acting was the topic at hand: Women. “A women is a secret,” Barber tells us, before launching into song at the top of the show. Is she? Because the women we encounter in the play, are about as stereotypical as they get. The girlfriend is a nag. The witch is a lesbian. The tease is a victim. The wife is a gold-digger. The fairy is a virgin. The feminist is, well, a foreign mystery. At one point or another, many of them are angels. At one point or another many of them are whores. And while, in fairness, we are offered an image of women slightly more complex than the one I’m suggesting here, regardless, the entire play revolves around the men. We’re left with a bunch of stories about women analyzing, saving, and satisfying men. As if we need another story where women act as foils for male development. As if we need another Penelope waiting patiently as Odysseus fights his demons, while her own drama happens in secret. And this is the problem, and indeed the danger, with A Women is a Secret: just because we don’t see Penelope’s drama, doesn’t mean it doesn’t happen. A woman is not a secret—her story just hasn’t been picked up. Now you might argue that this was not the goal of Woman is a Secret (to which I would ask, what is?), or that you can play with stereotypical, indeed antifeminist stereotypes for feminist ends (to which I would argue that this isn’t happening here). But even if this is at work in Women is a Secret in a way that my lady eyes weren’t able to pick up, we must still be critical of these narratives. In playing with problematic stereotypes, we must also ask what harm they do. We must question our responsibility when it comes to storytelling and representation. We should ask what a line like “men love an inscrutable piece of ass,” does. Yes, it’s funny; but what does it do. What kind of misogyny do moments like this allow, and to what end? Most importantly, what kind of narratives to they ignore. And what kind of responsibility as audience members do we have to be critical, to call them out.